Friday December 23, 2016: Bill joins Katie for a visit, Steffy thinks Santa will be good to Liam, and Quinn joins Eric at the piano. 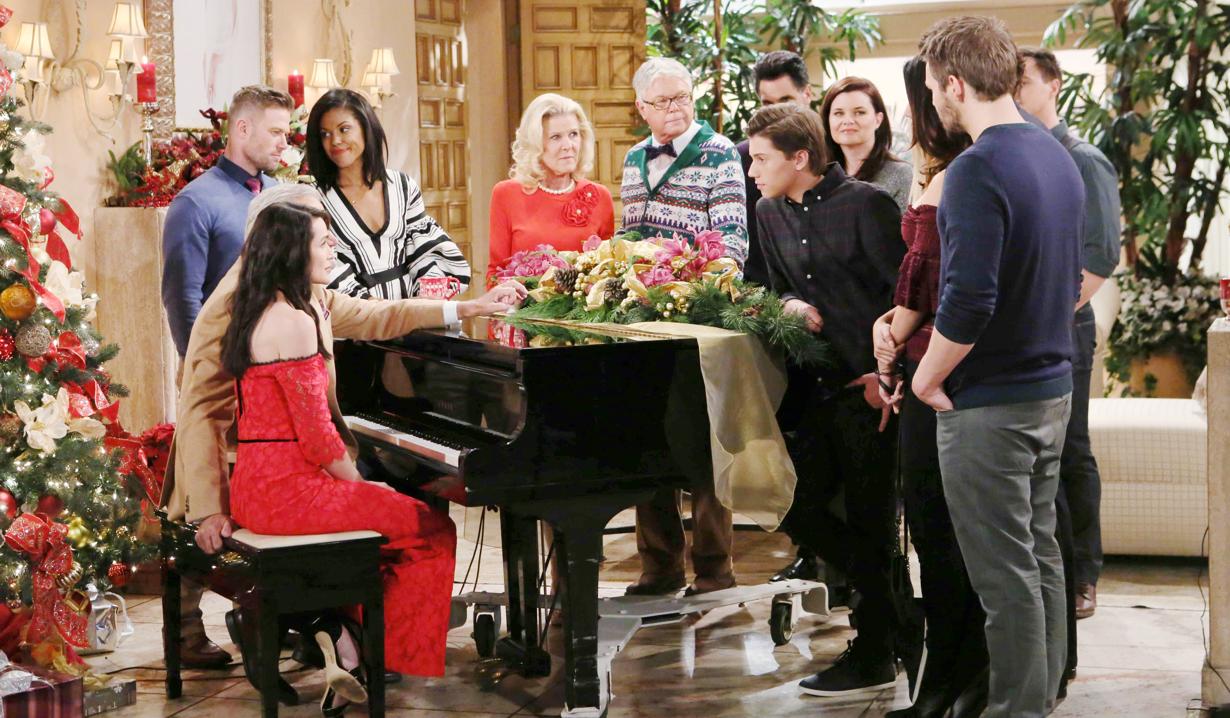 At the Forrester mansion, Quinn wishes a slightly glum Eric a Merry Christmas. He muses about his kids having their own families and traditions. Wyatt enters. He reports that Ivy is with her folks. Eric speaks to Kristen by phone, who sends her best. Quinn urges Eric to phone the others to come over and sing around the piano.

In Malibu, Liam watches as Steffy does a Christmas scavenger hunt for her gifts. They kiss, and Liam thanks her for understanding why he wanted to be there with her, rather than at her grandfather’s. Steffy points out there are things they can do there they can’t do at the Forrester mansion and playfully pushes him down on the sofa for a kiss.

At Katie’s place, she laughs as Bill gifts Will with stocks. Katie asks Bill to join her over at Eric’s to wish him a Merry Christmas.

In Brooke’s living room, Rick is reading The Night Before Christmas aloud. Ridge takes a call from Eric asking them to drop over. Ridge declines, but assures his father they’ll catch up over the holiday at some point. After, they all discuss it. Rick doesn’t want Eric to think they’re boycotting. Ridge resists; they’re having a great time there. Everyone seems uncomfortable.

Pam and Charlie arrive at the Forrester mansion after being at the mission, and head into the kitchen. Eric phones Steffy to come over for a Christmas carol and eggnog. Steffy begs off. Quinn tries to comfort a dejected Eric, who insists he’s great because he’s got her. They embrace. Katie and Bill arrive, and are taken aback by Quinn’s enthusiastic greeting.

In Malibu, Steffy tells Liam she feels guilty about turning down her grandfather’s invitation. Liam tells her to close her eyes and hands her the car keys; he wants her to have the best Christmas possible. She’s sure Santa will make all his dreams come true tonight. “Cha, cha, cha.”

More: Find out if B&B and other soaps are airing during the holidays

At the Forrester mansion, Eric stops short when he hears a noise from outside. Quinn opens the door and Ridge, Rick and their families are there. They all pile in and fuss over Eric. Steffy and Liam arrive and Eric tells them how glad he is that they’re there…both of them. Quinn sits beside Eric at the piano and the entire group sings Deck the Halls. Eric reads to the group, they play games, and Steffy makes a toast to her grandfather. Eric thanks them all for coming and keeping their traditions alive. They chant, “One more song,” until Eric launches into We Wish You a Merry Christmas.

Brooke and Ridge begin to plan their wedding.