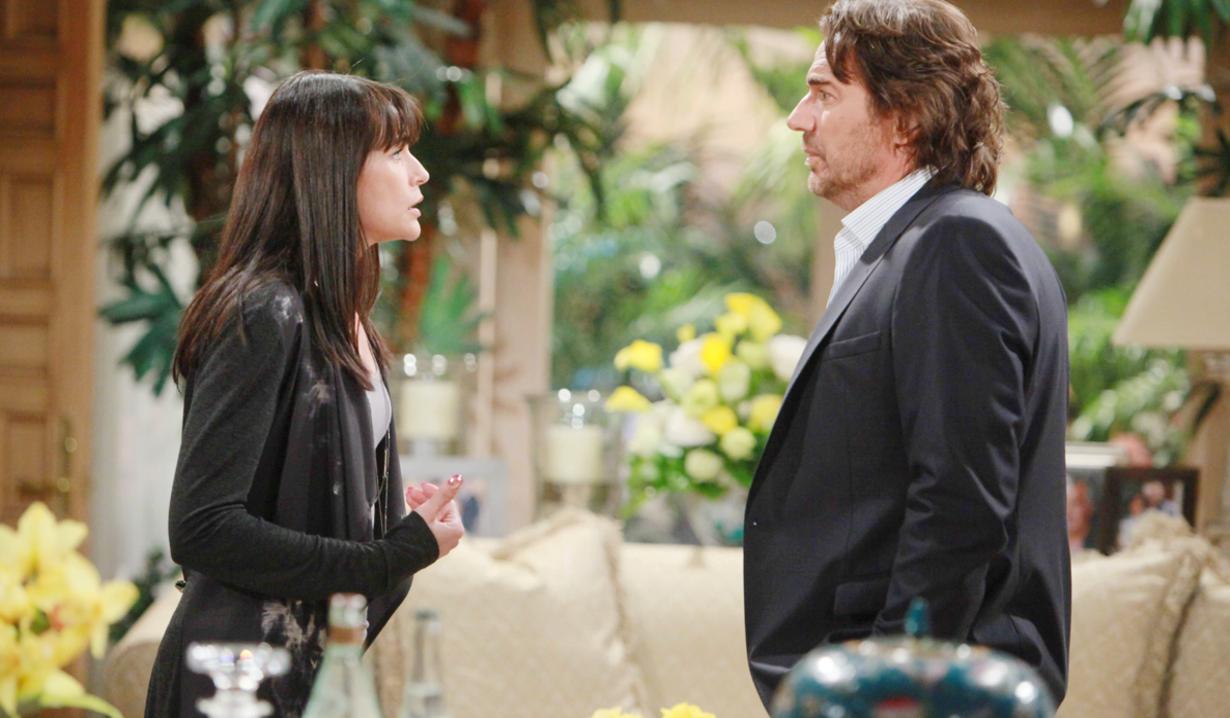 At the Forrester mansion, Wyatt urges Ridge to tell the truth; he doesn’t have Eric’s power-of-attorney. Quinn is stunned to hear Wyatt say she has total control. Her son states if anyone’s leaving, it’s Ridge. Disgruntled, Ridge complains about Wyatt suddenly wanting his mother and Eric together. Quinn is happy that she and Eric will never be apart again! Ridge asks Wyatt if he realizes what he’s done. He needed to protect his father from Quinn and everything she’s done to this family. Quinn concedes that she’s rationalized bad behavior in the past, worse than him, but she has changed thanks to Eric. She won’t debate with Ridge and reiterates that the family broke Eric’s heart by boycotting the wedding. Wyatt tells Ridge he made a mistake. Quinn goes upstairs to see her husband. In his room, she assures his unconscious form, “I will always be here for you.” Downstairs, Ridge and Wyatt argue. Ridge thinks he should have stayed out of it. Wyatt insists his mother’s changed. Ridge counters that she’s a chameleon, as it Wyatt. They debate about Eric and Quinn’s union. Ridge can’t believe that Wyatt effectively ended his marriage to his daughter. Wyatt hopes that’s not the case. Ridge clucks, “You don’t know Steffy at all, do you?”

At the beach house, Liam and Steffy discuss whether Quinn will ever be out of her life. Steffy tells him about Quinn having Eric’s power-of-attorney. They discuss how Steffy, Ridge, and Carter tried to protect the family, but Wyatt overheard them talking about it. Steffy panics over Quinn having control of Eric’s affairs, including the house and company. Liam rants about all that Quinn has done – he’s sure Wyatt will see that. If he doesn’t keep quiet, he’s not protecting Steffy. While Liam gets her some water, Steffy flashes to slapping Quinn in Monte Carlo, and to asking Wyatt to keep quiet. She tells Liam that if Quinn finds out she has power-of-attorney, she has power over her grandfather, and once again, over her marriage. Later, Wyatt arrives and Steffy learns he told Quinn she has power-of-attorney. He told Ridge if anyone left, it had to be him. Steffy asks how he could do this knowing how she feels about his mother. Wyatt declares that the success of their marriage has nothing to do with Quinn. He feels they can get past this, and wonders if she’ll stick around and fight, or if she’ll leave.

Back at the Forrester mansion, Quinn flashes through her romance with Eric and chats to him about their wonderful memories. She says it means the world that he gave her power-of-attorney and she intends to make him proud. Quinn kisses his cheek and he opens his eyes. “Still here.” They smile at each other. He says, “Monaco.” Quinn recalls it was the beginning of something grand. “Nothing will ever keep us apart.” He asks her not to leave. Quinn beams. “I’m never leaving you again, Sweetheart.” They cuddle up.