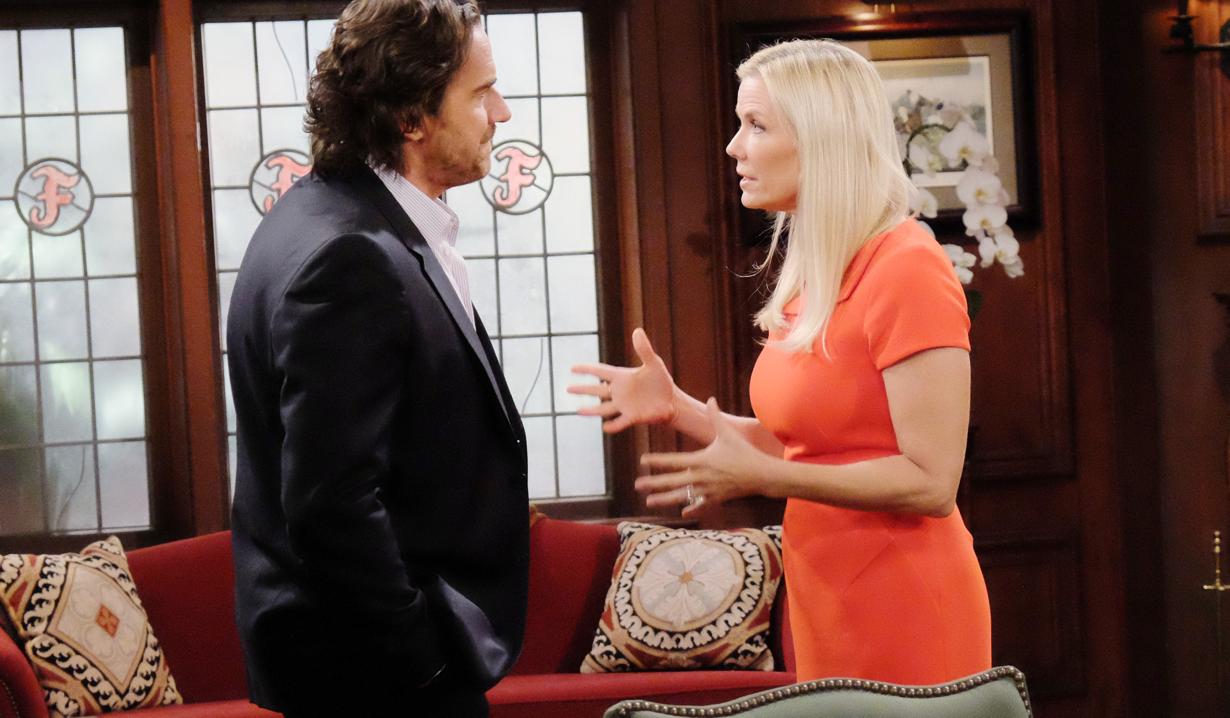 In Bill’s office, he appeals to Brooke not to let her son, RJ, run her life. He’s certain RJ will adapt when he sees how happy she is, and urges her, “Let’s do this.” Brooke laments that RJ has had to adjust to so much in his life. She is first and foremost a mother and has to be there for her son. Bill is leery of waiting, but admits he admired the way RJ came at him. He reminds her that Ridge will be awaiting his shares. Brooke says this isn’t about that. Bill agrees to waiting…but not for long.

At Forrester Creations, RJ thinks he did a good thing by stopping his mother from marrying Bill. He can’t see any reason why Ridge would want her to marry that guy. Thomas and Steffy go to another office and fret over Ridge wavering. Brooke needs to marry Bill and get those shares before Eric gets any more infatuated with Quinn! They hope Brooke is flying off to marry Bill as they speak. Back in the other office, Ridge warns RJ to prepare himself that Brooke might marry Bill. Brooke enters. RJ asks her to please tell him she’s not marrying Bill. Brooke hugs him and says she’s not. RJ tries to play matchmaker between his parents, but Brooke informs him she still plans to marry Bill. Ridge and Brooke assure the kid they’ll spend time together while he’s in town. After, RJ joins Thomas and Steffy. They are stunned to hear Brooke’s not off marrying Bill, but encouraged that she may marry him soon. Steffy tells him there’s a lot riding on this – the future of the company and the family is at stake.

Related: Find out when Winsor Harmon returns to B&B

In his living room, Eric tells Quinn this is their time. “Let’s make this official!” Quinn wants a life with him, but it has to include his family. Eric insists they’ll come around when they see how happy he is, and wants to start planning the wedding. They prepare email invitations. Eric assures her she’ll be Mrs. Eric Forrester and there’s nothing Ridge, or anyone else, can do to prevent it. They finalize the invitations and discuss the family’s disrespect. Quinn feels bad about it, but she won’t give up. She thinks Eric should try to convince them that she would never hurt him. Eric promises that his family will witness how much she means to him when they come to the wedding, and it will all resolve itself beautifully. Quinn asks, “Even Steffy?” Eric confirms, “Even Steffy.” They kiss and send the invitations.

Eric’s family confronts him about his plan.