Eric blindsides his family, and Thomas orders Julius off the premises

The Bold and the Beautiful recap for Friday August 12, 2016: Eric tells Quinn they have a future, Wyatt insists his mother is through with Eric, and Thomas intervenes to help Sasha. 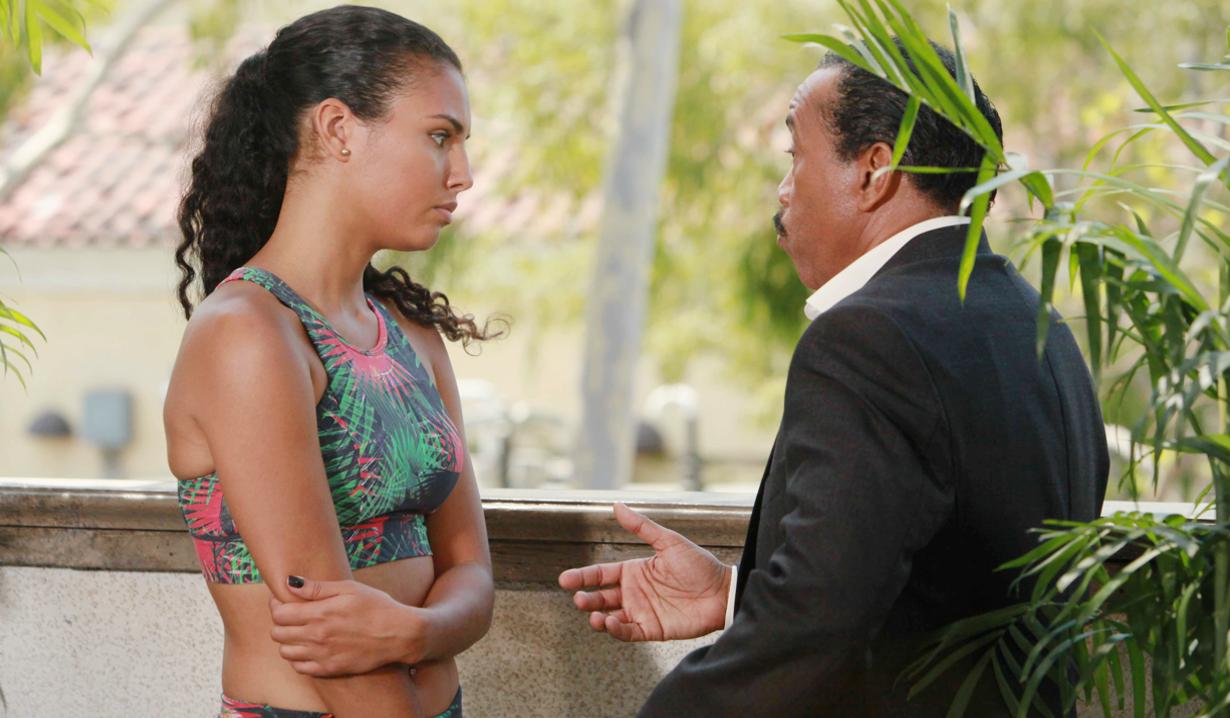 In Quinn’s hotel room, Eric informs her it’s not over between them. She notes their families won’t approve. Eric feels they’ll have to adapt since he wants her to be a part of his future. Quinn doesn’t want to cause problems. Eric knows, but reminds her they are adults capable of making their own decisions, which should be respected. Eric thinks Quinn has changed, and she certainly changed him. He credits her with firing him up about the future. His family insulted him by saying it was all a manipulation. Quinn assures Eric he’s not a figurehead; he’s a leader. “You’re in your prime.” Eric agrees. He’s going to call the family together and announce some changes.

At Forrester Creations, Liam wants to help Steffy, who shouldn’t have to deal with any of this stress over Quinn. Steffy doesn’t want Liam taking on her problems and talk turns to Wyatt just as he walks in. Debate ensues about Quinn. Wyatt insists she and Eric broke up. “They’re done.” In the boardroom, Ridge tells Rick he hopes Eric didn’t run out of there and over to Quinn’s – for all their sakes. Pam reports that Eric hasn’t returned. They all worry he’s with Quinn and will be taken advantage of by her. Outside, Sasha greets Thomas and asks about Caroline and Douglas. She’ll listen if he needs to talk, or is happy to sit back and watch him work out. Thomas compliments her and then gets called away. Julius materializes to press Sasha to go home. He informs her this is Nicole’s turf and she and Zende don’t need a reminder of their time apart. Sasha insists Nicole doesn’t have a problem with her being there – he does. Julius agrees – Sasha’s presence is a constant reminder to Vivienne of her pain. They bicker about her modeling job. Julius says models like her are a dime a dozen and she can model elsewhere. Thomas returns to hear Julius call Sasha the biggest mistake he ever made. Thomas intervenes and chastises Julius for the way he’s treating his daughter. He informs Julius he made a mistake, and he’ll have to fix it. Julius scoffs at Thomas trying to be chivalrous. Thomas orders him to leave. Sasha and Thomas rehash her situation. Sasha thanks him for standing up for her with a hug. Inside, Steffy receives a text from Eric about a meeting, and leaves Liam and Wyatt to argue. Wyatt insists to a doubtful Liam that Quinn is done with Eric. In the corridor, Pam asks Eric, “Quinn?” Eric enters the boardroom where Ridge, Steffy, and Rick are waiting. Ridge demands to know if Eric saw Quinn. Eric won’t answer to them and speaks about the jewelry line. He’s hired the former designer back. Steffy presumes he means Ivy, but Eric opens the door and ushers Quinn inside. Steffy shouts, “Granddad no! Absolutely not!”

Steffy explodes after hearing some news.

Eric's family rage at his...