The Bold and the Beautiful recap for Wednesday August 10, 2016: Bill rants to Justin about Brooke, Ridge convinces Katie to get on board, and Deacon learns of Quinn’s disappointment. 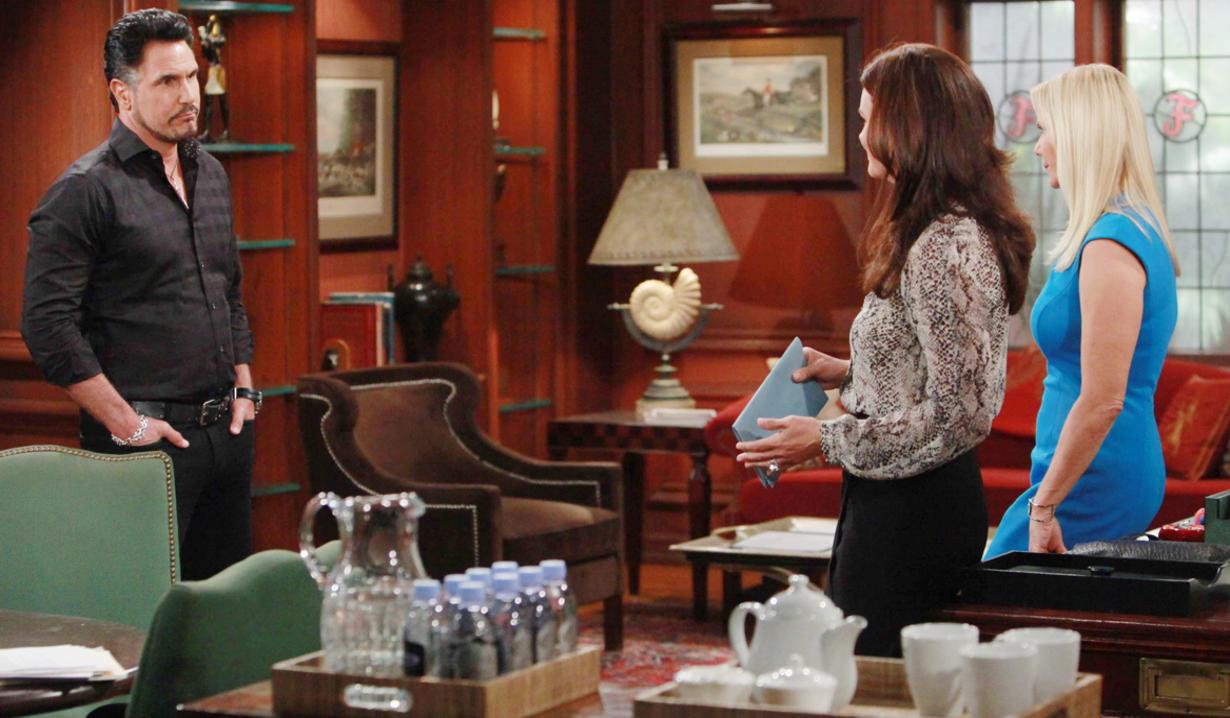 In Bill’s office at Spencer, he complains to Justin that Katie is probably with Brooke, who is more committed to his marriage than the two people in it. He still plans on a future with Brooke. Justin chides that if he were Katie’s lawyer, he’d have bled Bill dry. Bill feels he gave Katie everything she could want in the settlement offer.

At Forrester Creations, Katie tells Ridge and Brooke that Bill won’t give up his shares without a fight. Ridge thinks Katie can win a court battle if he and Brooke testify. As Katie informs Ridge she doesn’t want an ugly trial, Brooke receives several texts from Bill. Ridge asks Brooke what’s going on, and Katie realizes Bill’s texting Brooke. Katie turns back to Ridge and says. “Tell me more.” Ridge wants Katie to get Bill’s 12.5% of Forrester shares and sell them to him. Katie can buy her own yacht and jet, and he will be able to protect Forrester from Quinn’s influence. Katie still isn’t keen on a court fight. Ridge insists he and Brooke will be there for her.

Where Are They Now? Taye Diggs’ recurring role on Empire

In Bill’s office, he and Justin try to imagine what else Katie might ask for. Bill says he’s going out. Justin warns he will only make things worse.

Bill arrives at Forrester Creations, just as Katie is smirking at Brooke for being unable to commit to testifying on her behalf in court. Bill asks why Katie rushed off over here before signing. Bill and Katie both want to hear Brooke’s view of the settlement. Brooke urges them to reconsider divorcing. Neither is interested. Katie informs Bill she’ll have her lawyer draw up a counter-offer and doesn’t want his $50 million. He warns her not to go after Spencer Publications. Katie says she wants his 12.5% of Forrester Creations.

At Quinn’s hotel room, she flashes to kissing Eric. Deacon arrives. She tells him Eric won’t be coming around anymore. Deacon presumes her surprise visit didn’t go over well with Eric. Quinn says they actually had a wonderful time together, but the wrong person saw her leaving. Deacon learns it was Steffy and can’t believe Quinn didn’t see this coming – she’s irresistibly drawn to catastrophe. He offers to make her French toast. Quinn, deflated, tells him no thanks. “I’ll be fine.” Later, Ridge visits Quinn, who assures him Eric ended things between them. Ridge questions why there was anything to end. Quinn claims she wasn’t looking for love…just for an income. Ridge figures she saw a way to get that income without earning it. He believes that Steffy will end her marriage to Wyatt just to get rid of Quinn. She reiterates that she and Eric have split, and then complains about the family seeing Eric as a mascot. Ridge gets confirmation that she encouraged him to become CEO. Quinn insists she’s not a golddigger, Ridge is. Ridge clucks about Eric being easily led by women like him. He warns he will protect his father as Stephanie did.

Bill shares a theory with Liam.