Summary for Wednesday May 11, 2016: Rick learns Ridge is involved in a drama, Ridge blames Katie, and Caroline faces tough questions. 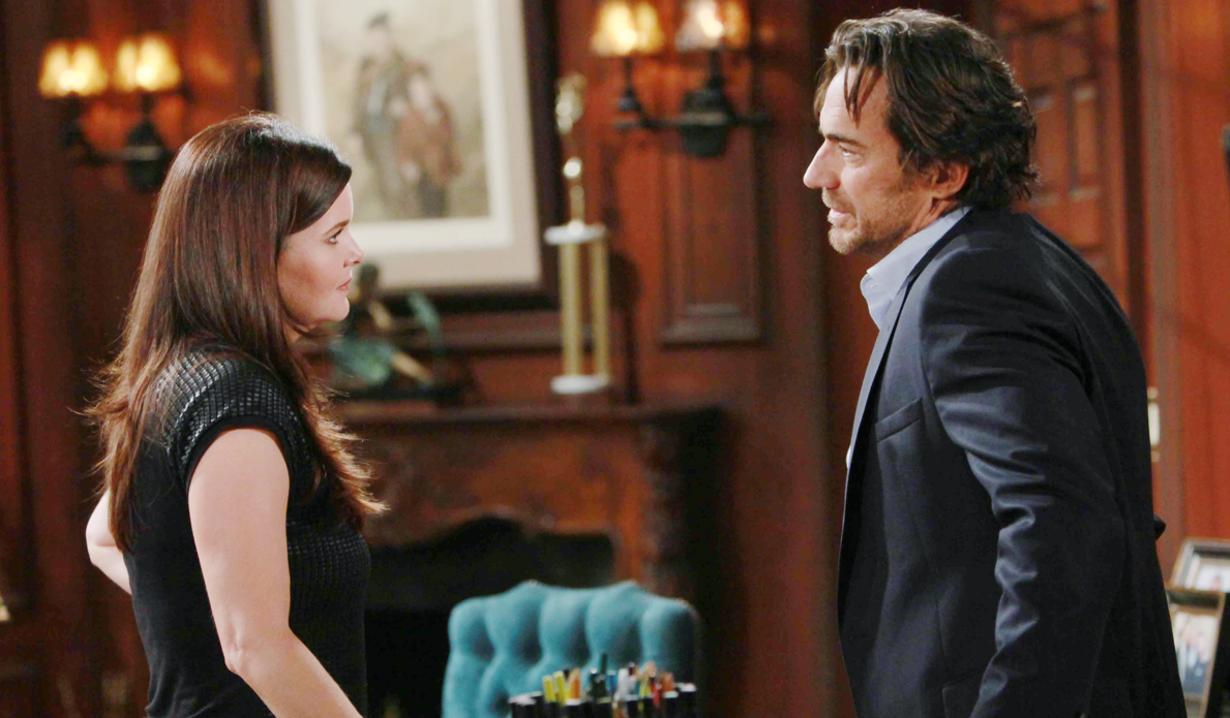 At Forrester Creations, Caroline tries unsuccessfully to reach Thomas and goes into a panic wondering what if they never see their baby again. Ridge learns from Charlie that Thomas drove off with Douglas. Caroline continues to freak out. In another office, Rick and Maya reflect on Sasha being revealed as Julius’ love child. Rick thought his family was the only one that kept secrets like that. They talk about Stephanie hiding Ridge’s true paternity. Rick feels that being the product of a scandalous affair shaped Ridge, who is always keeping secrets. He goes on about Ridge manipulating. Maya thinks the baby will be a good distraction. Rick wants to raise their child in the Forrester mansion. Maya soothes that he has every right to feel betrayed, but she doesn’t want this to consume him. Pam enters and gossips about Ridge being in a foul mood – something to do with Thomas and Douglas. Rick questions Pam, who explains that Thomas left with Douglas, causing Caroline to get upset. Rick scoffs that Ridge is over-reacting. He feels sorry for Thomas having Ridge as a father.

In the car, Thomas smiles as he drives. He answers a call from Ridge and asks for Caroline to be put on the phone. Ridge says he can’t just kidnap their boy. Thomas says Douglas is his. Caroline gets on the line and Thomas tells her he’s headed to the cabin. He wants her to meet him there – alone – he needs to see her.

Where Are They Now: Jack Wagner stars in The Wedding March

At Forrester, Caroline cries hysterically. She tells Ridge she will go to meet Thomas alone. Caroline orders Ridge not to call the police – she will handle this. “I’m going to get our son.” Later, Katie enters. Ridge takes her to task about sticking her nose in other peoples’ business. She maintains that Thomas deserved to know the truth – he knows she’s right. “You did the right thing.” Ridge shares that Thomas became irrational and took off. “He left with my son.” Katie gets riled up about the situation, but then warns that Thomas need time to deal with the revelation. Ridge says, “None of this would have happened if it weren’t for you!” He reiterates that Douglas is his son.

At the cabin, Thomas watches Douglas sleep. “My son. My beautiful boy.” He flashes through Caroline’s pregnancy. She arrives and rushes to the baby. Thomas assures her he would never hurt Douglas. “He’s my son.” Thomas asks why she didn’t tell him. Caroline says she couldn’t. Thomas feels terrible about that night. She knows he never meant to hurt her. Thomas says they created something beautiful. He apologizes for the situation, and she apologizes for not telling him; it was the way it had to be. Thomas wonders how she could let him believe Douglas was his little brother. He understands why he’s been so drawn to the baby now; he’s changed his life. Thomas felt the way a parent does when they look at their child. He notes Ridge expects him to push down his feelings and love and hide the truth. Thomas doesn’t think he can live with that. He wonders if it’s really what Caroline wants – King Ridge declaring things, claiming Thomas’ child as his own? “Do you really feel that way? Do you?”

Caroline is faced with an important decision.