Summary for Thursday May 5, 2016: Katie pressures Ridge to come clean, Caroline is stunned by what Katie tells her, and Vivienne reacts to Julius’ confession. 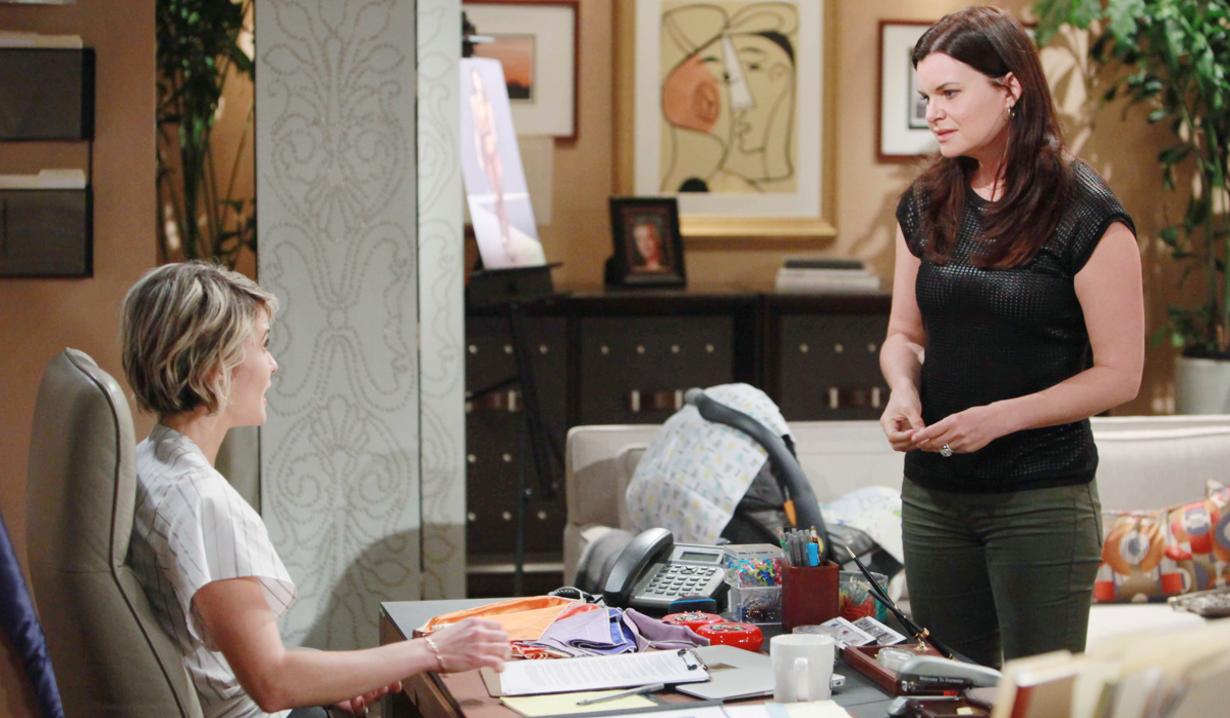 At Forrester Creations, Thomas goes on to Caroline about how much he’s changed since his new baby brother came along – imagine what he’ll be like when he becomes a father himself. He hopes when the time comes he’ll be as good a father as Ridge is. In Ridge’s office, Katie presses Ridge for a confession that he pushed Dr. Wolin into the path of the oncoming truck. Ridge insists he didn’t push the man, but admits he knew he wasn’t Douglas’s biological father. Katie asks if he knew who Douglas’ real father was. Ridge says he didn’t, and neither did he and Caroline – they used an anonymous sperm donor. Ridge tries to have a laugh with Katie over her presumption that he’d push someone into traffic. She thanks him for being honest and assures him there is no need to be embarrassed about using a donor. Ridge informs her he doesn’t want to discuss this ever again. After, Thomas drops into Ridge’s office and finds him distracted. He assures him it’s fine, he understands. “If I were in your shoes, I’d be just as distracted.” Thomas offers to help out at the office and at home with the baby. Ridge tells him they appreciate how much he cares about their son. Meanwhile, Katie visits with Caroline and Douglas. She refers to ‘everything she had to go through’ to have him. Caroline asks, “Excuse me?” Katie says, “Ridge told me about Douglas’ paternity.” Caroline is stunned. Katie explains that she kind of forced it out of Ridge, and explains how she came to meet Dr. Wolin. Caroline gasps. “I can’t believe that he told you.” Katie insists it’s not a big deal. Caroline wonders how it’s not a big deal that Thomas is the father. Katie asks if he was the donor. Caroline asks, “Donor?” Katie realizes the truth. “Thomas is your baby’s father?”

At the Forrester mansion, Nicole and Sasha refuse to leave while Julius comes clean to Vivienne. Julius takes Vivienne back through some funny mishaps they’ve weathered during their relationship. Vivienne laughs, but wonders why he’s bringing those up. Julius says it’s because of Sasha. He says Sasha’s mother was his mistake. Vivienne realizes that he had an affair with Lucy and that he’s saying Sasha is his. Julius pleads his case and tries to deflect some blame onto Lucy. Vivienne says Julius cheated on her. He claims he kept it hidden so as not to hurt her, but she feels he wanted to protect himself. Julius also wanted to protect his family. He begs her to tell him they can get through this. She notes he’s been keeping this secret through most of their marriage. Julius rants that she would have left him; he didn’t want to be a part-time father. Vivienne wonders if she was a joke to him and Lucy. She recalls how many times that woman was in her house and he didn’t say anything. Vivienne rounds on Sasha, who admits she knew and didn’t say anything either. Vivienne rants about Julius letting her child go, while he kept Sasha close. Julius hollers about the stress of keeping the family together and to keep his good name. Vivienne scoffs – what about her good name? She now understands why Sasha’s presence irritated him so much. Vivienne accuses him of putting his reputation before her or the truth. Julius argues they need each other. Vivienne refuses to leave with him. “Go!” Julius has tears in his eyes; the secrets and lies have been harder to deal with than any of them will ever know. He tells Vivienne, “I did it for you.” Once he’s gone, Vivienne confronts Sasha. “Like father, like daughter; lying to my face.” Nicole and Sasha sit by Vivienne as she cries. They all cry and embrace.

Katie presses Ridge for more answers after he gives her new information.