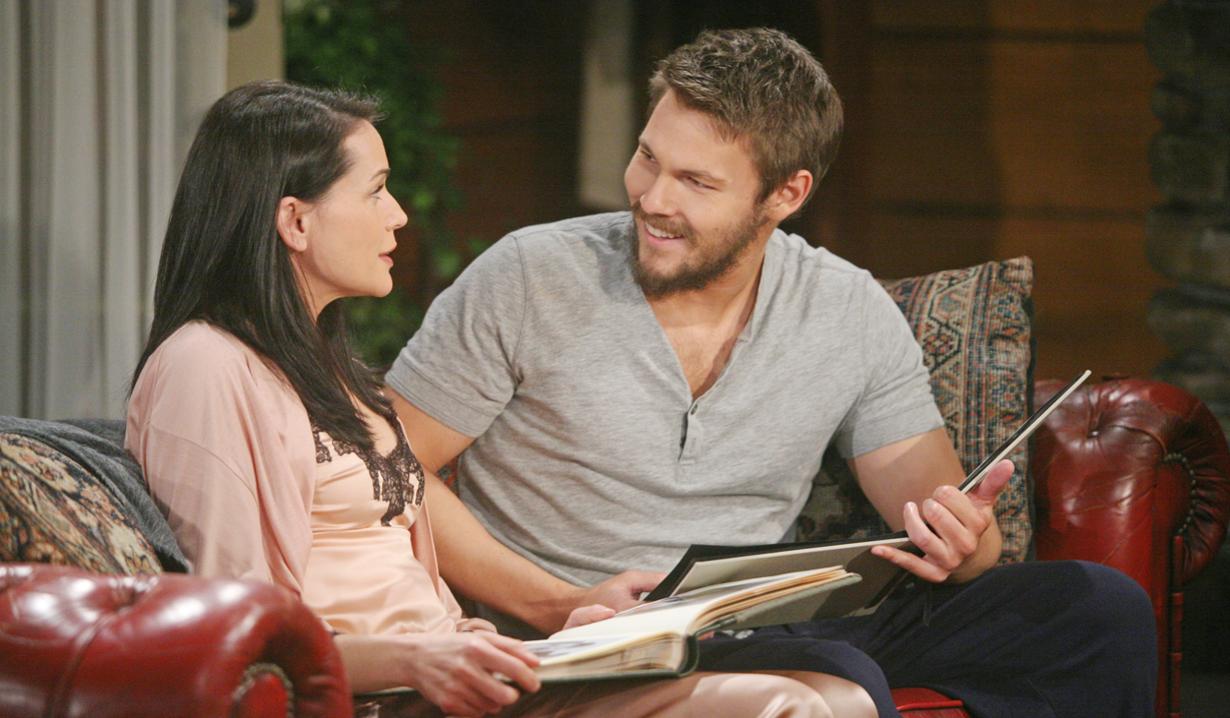 At the Forrester mansion, Caroline and Ridge admire the baby and kiss. Caroline says they’re a family. Ridge says Thomas is anxious to meet the baby. Caroline understands Ridge feeling protective, but they can’t avoid it. Downstairs, Thomas asks Steffy what the baby was like. She is distracted and admits she’s thinking about Liam – they were going to have a baby together. Thomas reminds her she’s engaged to Wyatt. Steffy says it doesn’t disconnect her from Liam, who is out in the world somewhere and doesn’t even know his cousin’s given birth. Thomas counsels Steffy to let it go. Ridge appears and lets Thomas go up to see the baby. In the bedroom, Thomas watches Caroline talking to the newborn. She looks up, sees him in the doorway, and invites him to see the baby. Thomas looks at the boy and declares him ‘perfect’. Downstairs, Ridge talks to Steffy about happiness. She admits it’s bugging her that Liam’s not there. Ridge thinks maybe he needs time. Talk turns to the birth. Ridge enthuses about the experience. They embrace. Ridge goes upstairs and joins Caroline and Thomas, who vows to be the best big brother the baby could ask for. He tells Ridge he hit the jackpot. “I would be lucky to have a life like yours.” Downstairs, Steffy flashes through her romance with Liam.

At the cabin in bed, Liam doesn’t remember his life but Quinn, but knows why he married her. They talk about going for a hike, but Liam prefers being in bed together. He’s frustrated that he can’t remember if it was always this good. Quinn tells him she found photos, when he asks. She’s hesitant, but takes him to see the albums when he proves insistent. On the sofa, Quinn opens the first album and is relieved at what she sees. Liam then asks to see their wedding photos. He sees a photo of Quinn on a motorcycle and admires her black lace outfit and how long her legs look. Next it’s the wedding photos on the mountain, with Quinn’s face once again super-imposed over Steffy’s. Liam’s admiration irks Quinn, who rambles on about weddings being fantasies. Liam assures her he loves ‘ordinary’ her too. After, Liam is frustrated that the photos didn’t trigger anything for him. He’s only half a person, looking for something to complete him. Quinn talks about making new memories. She wants him to tell her they’ll stay together no matter what.

Deacon warns Quinn about possible consequences down the road.

Wyatt and Steffy talk candidly about Liam and his disappearance.