B&B Recap: Come Back To Me.

In Paris, Liam frantically searches for Hope. Quinn sits in the cafe and watches through her binoculars. She chuckles about Liam losing again and congratulates herself. Ivy joins Liam and they decide to look for Hope at Forrester International.

At Forrester Creations, Brooke talks on the phone to Rick at International. Rick says Hope and Wyatt aren't back and he hasn't seen Liam either. Brooke hangs up and Bill appears. She asks if he's heard from Liam or Wyatt. He guesses her question involves Hope. She brings him up to speed and they discuss the triangle. Brooke opines that no matter what happens in Paris, someone's going to be the odd man out.

On the Spencer jet, Wyatt tells Hope she can't count on Liam - he just doesn't come through for her. Hope sits silently, looking sad. Wyatt takes a call from Quinn, who is thrilled to hear he's on his way to Monte Carlo with Hope. She urges him to marry her immediately - he may not get another chance. Wyatt hangs up and tells Hope she should walk away from Liam at this point. Hope admits she is tired of disappointment. Wyatt reminds her how good they were together. "Come back to me."

At Rick's office at International, Liam fills him in on his botched meeting with Hope. He's upset that Hope isn't answering her phone. Rick thinks she'll show up eventually. Liam calls Brooke and tells her and Bill on speakerphone that he was late and can't find Hope. He learns Brooke hasn't heard from her. Rick sighs that Hope's most likely with Wyatt. Ivy feels bad about the way things happened and tells Liam she'll explain everything to Hope.

In Monte Carlo, Hope gives a girl an autograph before getting on a small boat with Wyatt. They make their way across the water and are then welcomed aboard an incredible yacht. Wyatt watches Hope as she looks out over the water and says, "Let him go." Wyatt offers her the diamond back as a symbol of his commitment. He asks Hope to marry him.

At Forrester, Bill promises Brooke he will never dump a person into the water again. They talk about Liam saving Ivy. She prays it didn't cost him Hope. 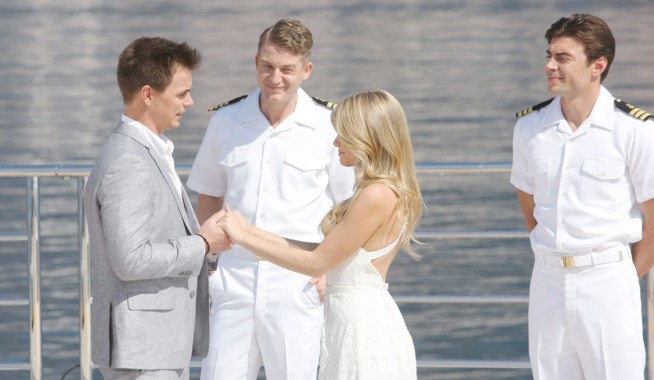