August 8, 2014: On Bold and Beautiful today, Hope does her photo shoot, Liam rushes to make his meeting, and Quinn interferes. 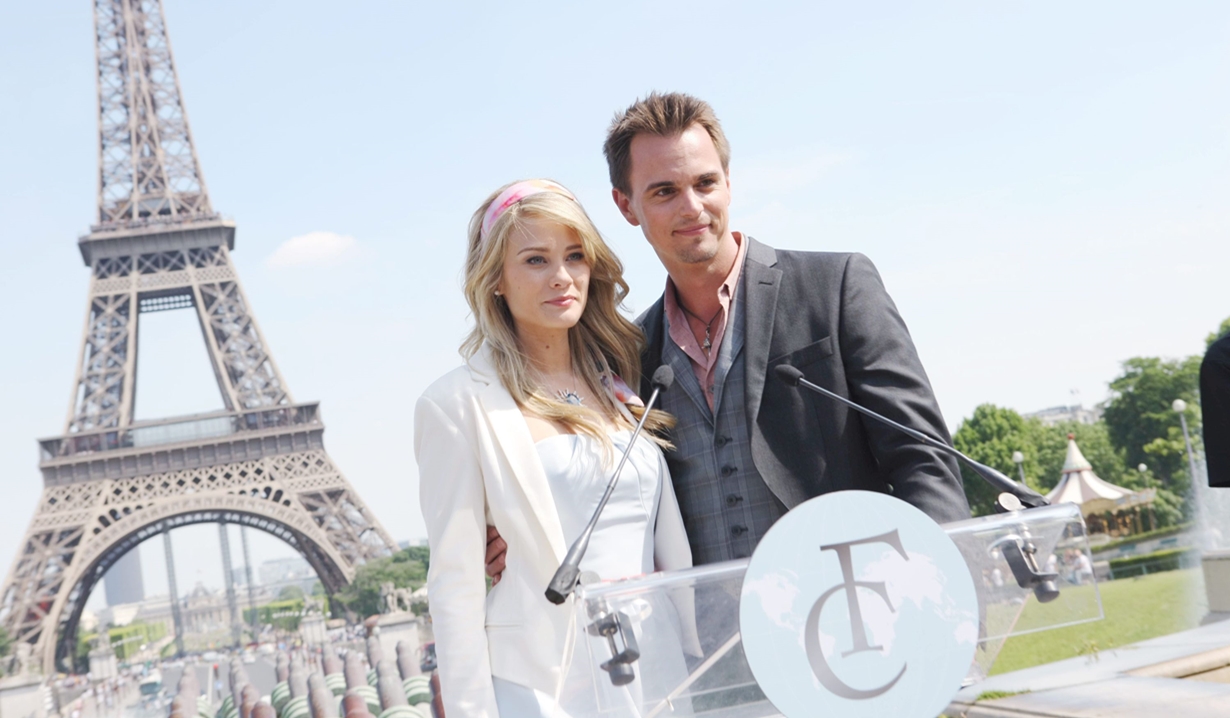 In Paris, Hope prepares for the shoot and press conference and is nervous. Wyatt assures her once he puts the diamond on her she'll have nerves of steel. The shoot gets underway near the Eiffel Tower, with Hope in different gowns and wearing the diamond necklace. Wyatt watches with Eva the publicist, who later introduces Hope. Hope gives a speech and takes questions from the press. They want photos of Wyatt and Hope together and ask about Ricardo's death.

On the flight to Paris, Ivy expresses envy of Hope to Liam. They discuss Hope choosing Liam over Wyatt. Behind them, Quinn listens as Liam says, "No more Wyatt, no more crazy mother." He confirms that Quinn tried to kill him. They land and Ivy gushes about Liam being chivalrous and gentlemanly. Quinn hangs back and looks determined. Outside the airport she watches Ivy and Liam get into a car and steals a motorbike to follow. In the car, Liam is worried about time and is stoked when they finally spot the Eiffel Tower. The car becomes snarled in traffic and Liam becomes a bit tense. He and Ivy leap from the car and start running so he can make it on time. Quinn follows on foot.

At Forrester, Brooke learns from Ally that Hope asked Liam to meet her in Paris and he's on his way there. "All he has to do is get there in time." Brooke's tickled.

At the Eiffel Tower, Wyatt asks Hope to go celebrate after the shoot, but she reminds him she can't - Liam is supposed to meet her there. Wyatt doesn't think he's coming. Hope returns the diamond to Wyatt and waits. Wyatt watches from a distance as Hope looks around for Liam. Nearby, Liam approaches and calls out to Hope, who doesn't see him. Ivy tells Liam to go on ahead - she'll take a picture. Since they are on a bridge over a river, Ivy perches on the side of the bridge to aim her camera at Hope as Liam runs toward her. Quinn takes in the scene and decides to push Ivy off the bridge into the water. Liam hears Ivy scream and runs back to her as the clock chimes three o'clock. In the river, Ivy hollers at Liam to go - she can swim to the side.

Spoilers for Next Week on The Bold and the Beautiful:

Liam struggles to get to Hope.

Wyatt tries to appeal to Hope before it's too late.