Monday June 2, 2014: On Bold and the Beautiful today, Ridge interrupts Brooke and Bill's ceremony, Wyatt tells Hope about the selfie, and Quinn and Katie spar verbally. 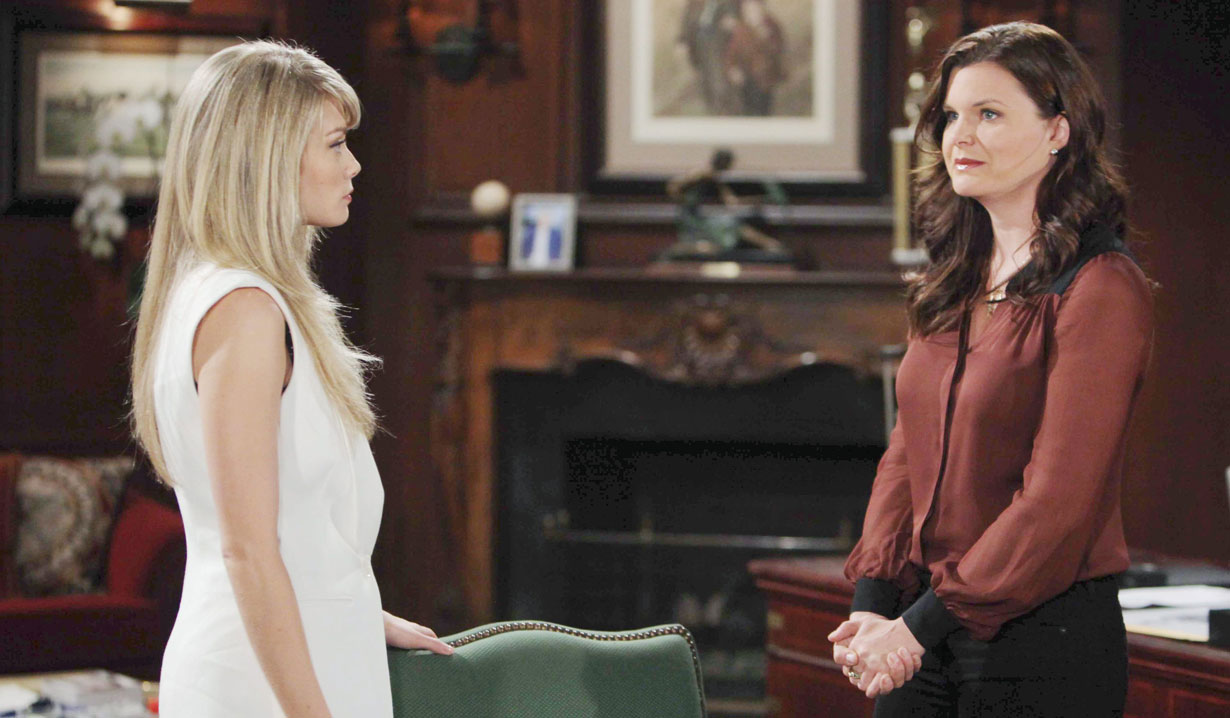 On the beach in Abu Dhabi, Bill and Brooke are about to exchange rings when Ridge appears and yells, “Logan!” He runs down and tells Brooke she’s coming with him. Brooke and Bill are stunned. Ridge tells Brooke that Bill isn’t loyal and faithful. He holds up the Quinn and Bill selfie. Bill says it happened the night Brooke was marrying Ridge; Quinn showed up and he was drunk. Ridge punches Bill and grabs Brooke’s hand. Brooke screams for Bill as Ridge drags her up the beach. Bill gives chase. A helicopter lands. Ridge gets a protesting Brooke inside it. Unbeknownst to Ridge, the pilot is Justin. Bill watches them take off. Brooke rages at Ridge for ruining her wedding day. Bill calls Justin and tells him to cool Ridge off. Justin makes a sharp turn and Ridge falls into the Persian Gulf.

At Forrester, Hope doesn’t understand why Ridge thinks he can stop Brooke’s wedding. Wyatt tells her about Quinn’s selfie. They debate whether Bill actually cheated on Brooke. They agree not to let what happens between their parents affect them. Hope still thinks Quinn could dial back the crazy a bit. Wyatt says he grew up with her stunts. He doesn’t support them, but won’t throw her under the bus either. He thinks Bill and Brooke’s connection will prevail. In another office, Katie tells Quinn she doesn’t like what she did, but she wouldn’t mind seeing Bill’s face when Ridge shows up. She marvels at Bill sleeping with people he doesn’t even like and says she wants her sister away from him. Quinn tells her she’s welcome. Katie muses that Bill will probably never forgive her for this. Katie decides to let Quinn start packing up her things – she obviously won’t have a job there anymore. Quinn disagrees. Katie laughs that she’s evil and delusional. Later, Quinn finds Wyatt and they debate what the consequences of her actions will be. Quinn thinks Brooke will come back engaged to Ridge. Wyatt says she made a big mess and it won’t end well. He warns if someone gets hurt it’s on her. Meanwhile, Hope and Katie step into an office and Hope asks if Katie’s okay with Ridge doing this. Katie knows that he loves her and wants her; she won’t second-guess that. She also doesn’t want Brooke with Bill. They speculate on what might go on with Ridge and Bill in Abu Dhabi. Katie warns to expect the worst. After, Katie looks at Ridge’s photo and implores him to call her.

Hope and Liam get into it with Quinn about her affair with Bill.