Eric & Stephanie, Ridge & Brooke enjoy a snowy evening together at the cabin; fresh out of food, they drink brandy and do what they do best argue! 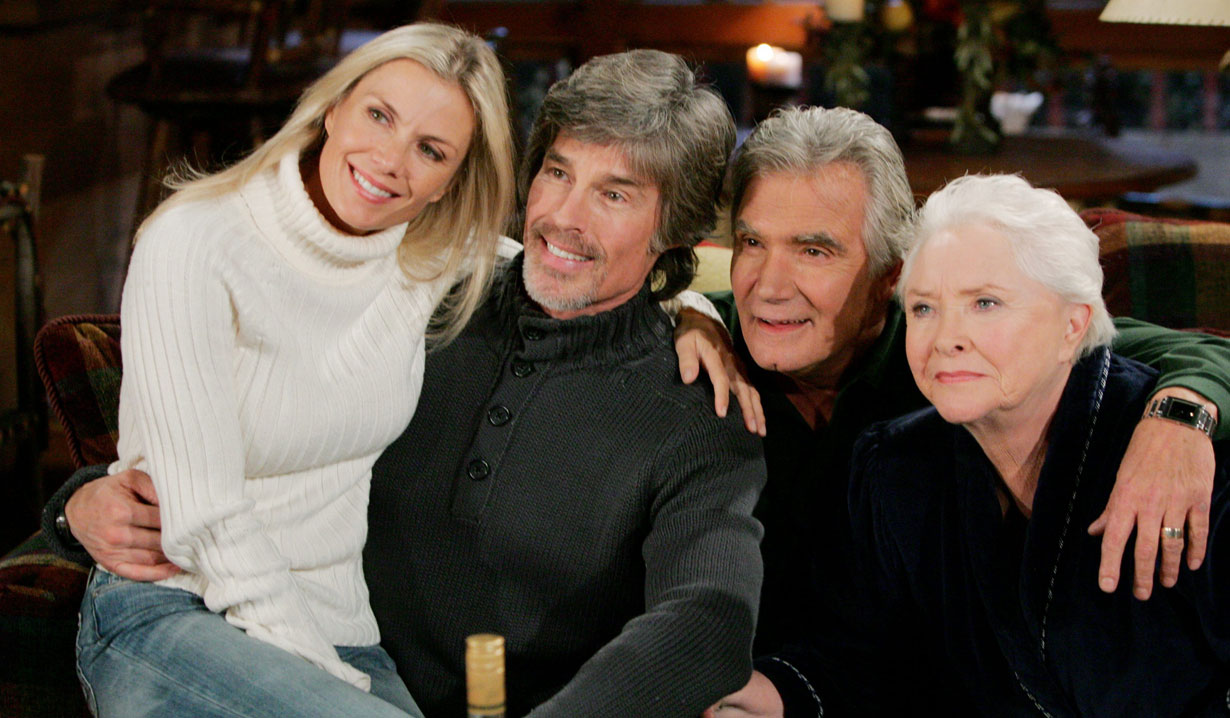 Eric has called a little meeting at the family cabin in Big Bear to discuss the possibility of opening their own boutiques. While waiting for Brooke and Ridge to arrive, Stephanie and Eric settle in. She is digging through the freezer at the Big Bear Cabin and is surprised to see that the steaks are gone. Eric comes in grumbling about being too old for gathering firewood. He wants to sell the cabin, but Stephanie won't hear of it. She wants to sell some of her jewelry instead.

The snow is really coming down as Ridge and Brooke arrive. As soon as they walk through the door, Stephanie asks them if they know what happened to the steaks. Ridge says that Thomas and his buddies were the last ones to use the cabin. Like a true camper, Eric says that there's no food, but plenty of booze. So they sit around the fire, drinking brandy and eating old crackers. Brooke suggests that they put a moratorium on any decisions about the business until next week. Ridge explains that she asked "Popeye" to carry their new line in Jackie M stores. Stephanie and Eric aren't happy to hear that Brooke did that without their consent and they all start to bicker.

"Hey, I'm not the one who has a headache every Friday night!" Friday night!" Eric is half kidding as he roasts his wife. They're all getting a little buzzed as they try to get back to the subject at hand. Out of nowhere Ridge suggests that "if it was good enough for Martha Stewart" Brooke agrees that sending Stephanie to jail for what she did might have been the better option. Aghast, Ridge says he was talking about selling a private line in a department store!" Stephanie is a feisty drunk, so she resorts back to her old ways of sparring with Brooke. "Once a caterer's daughter, always a caterer's daughter," she slurs. When she starts talking about Brooke being a commoner from the valley, Brooke grabs her coat and heads out the door. Eric and Ridge exchange knowing looks and don't say a word. Ridge follows Brooke out the door; Eric follows Stephanie upstairs.

In their cabin bedroom, Stephanie admits that she's afraid to start over again. Eric tells her that the bank says they can pull it (the boutiques) off. Stephanie thinks that it's the kids turn to take on a new venture. Why can't we just sit back and enjoy all this money that we've made? They daydream a little about the kinds of travel adventures they could have, but Eric says he can't spend the rest of his life sipping martinis from a deck chair. He doesn't want Stephanie to be his "Golden Girl", he wants to do what they do best face a challenge. She asks if he wishes that she was 30 years younger? He says that he would feel too insecure. So, she poses another scenario to him. What if she were 30 pounds skinner? Now Eric is slurring his words when he says "A waste is a horrible thing to mind!" Stephanie good naturedly agrees that they can mortgage everything to the hilt so they can start all over. He is thrilled and immediately starts a pillow fight with her. Goose feathers are all over the place and Eric playfully tackles her on the bed amidst the downy mess.

Brooke is freezing outside when Ridge finds her huddling against the cabin. She tells him that she is waiting for Stephanie to go to bed. She wants Ridge to let Eric have is way everything they have is his to risk in the first place. Ridge asks, "Don't we owe it to the kids to leave them as well of as we were?" "No," Brooke replies. "It's more important to leave them with some pride and dignity."

Just then, Eric opens the window up above them and throws goose feathers out of the window. They rain down on Brooke and Ridge and they hear Stephanie order him to "Close that window and get your naughty ass back here!" Ridge and Brooke can't believe their ears, and Brooke can't resist temptation. There's a ladder nearby and she uses it to climb up to Eric and Stephanie's window to take a peak. As she positions her face up against the cold window, she hears the "squeaksqueak" of an old mattress and who knows what she sees, but her eyes get really big. She tells Ridge to climb up and check it out. After he sees, and hears, the same thing, he is horrified and says, "Thanks Logan, my eyes are burning now."

Later on, Eric has come downstairs and is alone with a pad of paper by the fire. He starts to reminisce about his life with Stephanie and the years in which they grew the business. He recalls the black-tie party when a stunning Stephanie (in a white sequined gown) meets caterer Beth Logan's daughter Brooke for the first time. He remembers when he saw Brooke for the first time and took her breath away. He thinks about a very young Ridge and Brooke as their feelings started to grow. He remembers Ridge as he embarked on his first fashion show, and finally all the hustle and bustle of the dressing room throughout the years.

As Ridge and Brooke come back into the cabin, they find a happy man sitting by the fire. Eric tells them they can't see a thing out there, and to get inside. Brooke joking says, "Trust me, we got an eyeful." He tells her not to worry; Stephanie is in a much better mood now. "I'm sure she is," Brooke jokes.

Stephanie comes out and apologizes because the brandy went to her head. Brooke waves a feather at her and Stephanie lovingly asks her what she's doing? Brooke gives her a little bit of her own medicine and tells her they know what she didshe used her body to get what she wants. Stephanie deadpans that moving right alongshe's decided to vote with Eric and go for the boutiques! Brooke agrees, and Eric thanks them both. Before hearing what Ridge has to say, he announces that he did some math in his head and between them all they have designed 5000 pieces together. Eric says, "All of us, doing it together from the very beginning. We've been creating our art and the world has accepted it." He turns to Ridge and says that he can't start a new enterprise without him. Ridge happily says that he's in!

As Eric turns his notepad for them all to see, he has scribbled a big "5000" across the sheet. "The four of us, from the very beginning to the bitter end," Eric says as they all hug and kiss. Before Brooke goes upstairs to bed, she leans in tells Stephanie that she knows that she loves her. Brooke asks for a hug in honor of 5000 and Stephanie says that she'll wait until 10
Stephanie looks right at the camera as Brooke gives her a big kiss on the cheek anyway.

The words "5000 episode" comes up over a beautiful scene of the cabin in the falling snow.

I Got You Babe