Taylor is waiting for Brooke to meet her challenge: to tell Nick it's over forever. After a pause, Brooke says that Nick knows where they stand. Her question, however, is why Taylor would have a date with Nick so soon after breaking up with Thorne. As Nick whisks Taylor off, Brooke reminds him to think about carrying Forrester Originals. He bids her a happy Valentine's Day and leaves.

Ridge comes home and asks Rick where Brooke is. Rick is tickled that Ridge has lost his fianc. Then Rick acknowledges that it's Valentine's Day and asks Ridge if he'd like a schedule of his whereabouts for the evening. Ridge says that won't be necessary because Rick already knows the boundaries. Ridge changes to another hot topic and says that Rick is siding with Eric and his Forrester boutique idea simply to oppose him. The discussion leads to one of family loyalty and Ridge gets in Rick's face and demands that his loyalty to the family NEVER be questioned. But it's his loyalty to Brooke that concerns Rick. He reminds Ridge that Brooke's heart was torn out when he chose Taylor after Stephanie faked a heart attack. (He also pointed out that mother and son are two of a kind!) As if that weren't bad enough, Ridge then changed his mind and as a result, Taylor's drinking ended up killing Darlacausing even more pain in the family! Brooke comes in the door and finds them arguing. She yells "Enough and enough!"

Nick has pulled into his driveway, so Taylor assumes that Nick wants to change out of his suit before they go to Chucks. He says it warms his heart that she would spend valentine's night at Chucks, but he has other plans. He opens his front door to reveal a lovely romantic dinner for two in front of the fireplace. Taylor is pleasantly surprised. He pours some non-alcoholic champagne and tells her that her beauty surpasses the candles and flowers. As waiters appear to serve their meal, Nick has an important question. "What is the status of our patient/therapist relationship?" Taylor tells him that it's up to him. He fires her so that little issue won't stand between them anymore. It's Taylor's turn for a question. She wants to know if he's happy now that he's taken on a new business empire. He says that he's happy tonight, and asks if his fighting with the Forresters is a conflict for her. Not really, she says. She'll always be connected to them through her children, but Stephanie obliterated their last tie when she came forward with privileged information on Jackie.

Over at Brooke's house, she wants to focus on one crisis at a time and the issue at hand isn't her engagement it's whether or not to put everything on the line to open Forrester boutiques. She announced that it might not be necessary because she asked Nick to consider carrying Forrester Originals at Jackie M. Ridge doesn't think "Popeye" would even consider such a thing. Brooke kisses him and asks for a moment alone with Rick. When alone, Rick tells Brooke that if Nick is even considering carrying their line, that means he still loves her! Brooke begs to differ since he's sharing a Valentine's dinner right now with Taylor. Rick thinks that's a moot point. He reminds her what a good man Nick is and she should reconsider their relationship before it's too late. She wants him to accept her decision to marry Ridge. She hugs him and tells him good night.

Nick and Taylor have finished their meal and moved fireside. She tells him that it's nice to be with him on Valentine's Day. But she speaks as a therapist in telling him that he's still in the healing process, but then again, she probably is too. He acts like he didn't even hear her and asks her if she's a passionate woman. "I am a very passionate woman," she says about an inch away from his mouth. They kiss, and aren't even interrupted by the ringing of Nick's cell phone. It's Rick calling to tell him he wants to see him right awayregarding Brooke. But all he gets is Nick's voicemail.

As Brooke crawls into bed, she thinks about Nick for a moment, but soon a shirtless Ridge joins her. They decide to shut out the world and get lost in each other and the way they feel (kiss kiss)smell (kiss kiss) and taste (kiss kiss, lights out). 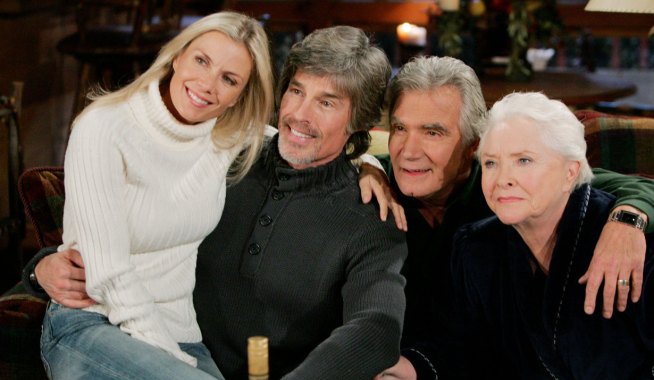