Taylor is not only physically back in town, she's stronger (and mouthier) than ever!; Brook attempts to use her charms on Nick, and Eric has a grandiose plan!

Clarke, Donna, Storm, Jackie and Nick make several toasts to their successful coup and brace themselves for the Forrester's retaliation. As they celebrate, they talk about Eric's options at this point; dare he sell his artistry through mere department store chains? Jackie is quiet. She explains to Nick that she is empathetic toward Eric and what he must be going through.

Over at the Forrester family camp, everyone is trying to wrap their heads around their stunning new situation. Ridge's suggestion that they should sell their new line at department stores falls on deaf ears. Eric would rather burn the line than ruin a reputation that took a lifetime to build. As Ridge insists that it's the only way to stay afloat, Stephanie and Brooke point out that Fenmores would drop them in a heartbeat and the specialty stores would never carry them again. Then Ridge offers another idea, why don't they sell their name to conglomerates? Eric won't hear of letting their name be stamped on dish cloths. Ridge heatedly contends that putting the name of Forrester (Creations) on Clark Garrison's schloky designs will sink their brand anyway.

Eric tells Ridge that there's another way. They can open their own chain of upscale boutiques around the globe even if it takes mortgaging everything they own. They need to restore their dignity and their good name. Ridge says that Forrester Originals is only a company that's one month old, not the proven entity that Forrester Creations is. Rick pounces on Ridge for not being courageous enough, but Ridge says this decision could impact the family for generations to come. Eric argues that he will NOT sell their souls!

During the celebration in Nick's office, he gets a phone call from Taylor. She wants to thank him for the beautiful bouquet of roses that have arrived for her. She asks if he realizes that there are three different colors. Then, she playfully tells him that some are pink. He quickly points out that pink stands for admiration and appreciation. Taylor accepts that explanation and then tells that that the yellow roses clearly signify friendship. Then, she pauses and says "Red?" Nick coyly acts as if he didn't realize that he ordered red, moreover he certainly doesn't know what red roses represent. Then, he asks her to dinner. She flirts with him by asking if that means she will be his Valentine. Pretty much, he says. She tells him that even though she had given up on the holiday for this year, it sounds great. 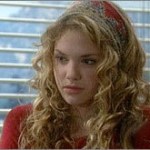 After Taylor hangs up, Phoebe comes into the family room and sees Taylor admiring her roses. She is upset to learn that they are from Nick and thinks her mother should send them back in view of the fact of what Nick has done to Ridge and Eric. Taylor explains to her daughter that business is business and that she needs to get on with her life.

The celebratory party in Nick's office has disbanded and Brooke barges in. She asks Nick if he's enjoying his victory. They argue about who did what to whom, and ultimately Brooke pulls the "If you ever loved me, you will put an end to this war before it gets worse." She has come to ask him to carry Forrester Originals in the Jackie M boutiques. "You know hat you're asking me to do?" Nick says. She gets really close to him and says the equivalent of "pretty please." Just that moment Taylor arrives for their date. Brooke is shocked to learn that they have plans on Valentines Day.

Taylor doesn't miss a beat and asks Brook, "What's that on your fingeran engagement ring from my ex-husband?" She goes on to say that everybody has a Valentine, so what's the problem? She tells Brooke to stop passing judgment and go find Ridge and their destiny. "Better yet, you get custody of Stephanie!" She's right in Brooke's face when she tells her to finally give Nick closure and tell him that their relationship is over for good!

It's a Showstopper. Literally.