Stephanie is home to a new set of rules, Ridge eats some crow with dinner, and Phoebe and Rick make up some interesting new constellations.

Brooke is making a family dinner and Ridge is concerned about turning Rick's attitude around, so he changes into a more "paternal" shirt. Phoebe comes over for her weekly night at her dad's house and they are happy to have her come in for dinner. Ridge says he could use more buffers between him and Rick. Just then, Rick stumbles in the front door, a little drunk and with a bloody nose. As he goes upstairs to wash up, he explains that he had a "lecture" at a leather bar in Silver Lake. 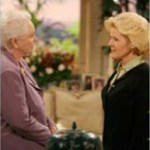 Eric and Pam are sitting by the fire after their pot roast dinner. He tells her that he owes her for making him feel so much better about things while she's been there. She thanks him for showing her such a different world. Just then, Stephanie arrives home a little early joking that she couldn't take it with their mother much longer! She and Pam give each other a big hug, and Pam goes off to make her some tea. After she goes to the kitchen, Stephanie jokes to Eric hat it looks like Pam took such good care of him that he didn't have time to miss her. Eric reports that Pam has been the perfect guest, and a great help in planning tomorrow's engagement party.

During dinner and Ridge and Brooke's Rick explains how the bar fight happened. He got into a discussion about the tension between the USA and France. And, he didn't realize that he was going to a leather (biker) bar, until he walked in. Then the dinner talk becomes business talk. Ridge tells Rick to keep in touch with all of the former employees in Europe, so that they can hire them back when they are up and running. Rick points out that these people have mortgages and families to protect and can't just wait around. They work for Nick Marone now. Speaking of Nick, Ridge mentions that Hope told him that Nick stopped by earlier. He asks Brooke what they talked about. Rick speaks up and tells Ridge that's a little personal. He says that it sounds to him like there's some unfinished business between his mom and Nick and Ridge should butt out. Then, he comes right out and asks what happened to Brooke's marriage to Nick. Ridge says that it was a situation of Nick's doing; that's all he needs to know. Brooke tells them to settle down, but Rick stomps off. Phoebe offers to go outside and talk to him.

Inside, Ridge tells Brooke that they should just tell Rick what Nick did. "When he hears that Nick cheated on you with his own sister, he'll know why your marriage ended!" Brooke says the subject isn't open for discussion. She wants Bridget and herself to have a little peace. Ridge agrees to keep it quiet, and says that Rick can come to him any time -- when he's ready to get to know him again.

Outside, Phoebe has found Rick. He tells her that he knows he's an ass, so she doesn't have to tell him. Phoebe tries to help. She tells Rick that she doesn't know what happened to Brooke's marriage, but she believes that she loves Ridge. Rick jokes back, "And I believe that I could go sky diving without a parachute". They joke about how he could find new ways to make everyone's life miserable instead of picking on Ridge.

Pam and Stephanie catch up while Eric brings in Stephanie's bags. Pam tells her that Jackie did show up, but Eric didnt' seem interested. "I honestly don't think you have to worry about that one," Pam says as they hug. Stephanie tells her that she's glad that she can stay in LA for the party -- even though their mother won't be pleased. Soon, Pam tells her sister and Eric good night so that they can talk.

When they are finally alone, Stephanie tells Eric that she's glad he didn't leave while she was gone. He told her that he came to conclusions while she was gone, however. One is that he doesn't get enough of what he needs from her. She tells him that whatever it is, if it's humanly possible, she'll find a way to give it. Eric tells her that he needs things like attention and appreciation. He says that something is going to have to change if their marriage can finally be okay. "I think that's going to have to be you." He tells her. He gives a few examples of what he means by this: he can take criticism; but not contempt. He wants her to stop scheming and leaving him in the dark. Andshe is to stop the never-ending war with Jackie Marone. Stephanie tells him that the hardest thing for her would be to realize that he can get from another woman what he can't get from her.
"I love you," she tells Eric.
"Why?" he asks.
(Stephanie) "Habit."
(Eric) "Shall we start again?"
(Stephanie) "Can we?"
(Eric) "It's what we do best."
As Eric and Stephanie finally give in to a big hug, Pam is watching from the top of the staircase.

Out in the garden at Ridge and Brooke's house, Rick and Phoebe are lying on the grass looking at the stairs. He says that the big dipper looks different from America. Phoebe tells him that she can never find the dipper part. He puts his head really close to hers and points it out in the sky. When she finally sees it, she doesn't get what the big deal is about it's just seven stars that kind of make a shape. They joke about connecting other stars and point out one group that could be called the "Big Zipper", and then another that could be the "Big Stripper."

Ridge wants Brooke to come up to bed, but she's finishing up in the kitchen. He asks where Phoebe is and Brooke says that she and Rick are still outside. She promises to come upstairs in a few minutes, then closes the windows and sees Rick and Phoebe lying on the grass.

Phoebe is a "Faux Forrester."

Ben Affleck Admits Getting Back Together With J.Lo Was ‘Beautiful’: ‘It’s A Great Story’

Anne Rice's Mayfair Witches Series Ordered at AMC, to Follow Launch of Interview With the Vampire in 2022