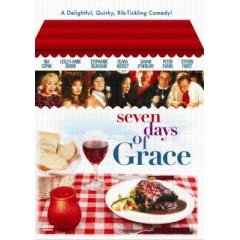 B&B’s own Lesley Anne Down’s(Jackie Marone) 2006 movie ‘Seven Days Grace’ was recently released on DVD. It is a romantic comedy produced and directed by her husband Don E. FauntLeRoy. Lesley met Don when filming ‘North and South’, and currently they reside in Malibu with Lesley’s son and her two step-children.

Those who worked on the film say it is a fun story about Grace, who inherits the family restaurant from her father, who passes away before he can tell her the “secret” recipe for their famous ribs. Grace dedicates herself to saving the restaurant (and the recipe) from going under.

It’s no secret by now that Lesley Anne Down was once voted Britain’s Most Beautiful Teenager, and many Soaps.com readers would agree that her remarkable beauty endures today, helping put the “beautiful” in The Bold and the Beautiful. An avid reader and collector of Victorian children’s books, Down loves spending her time with children and animals.

Lesley Anne first gained popularity as an actress in the series ‘Upstairs, Downstairs’ and has gone on to add a large number of credits to her name. She has appeared in many feature films, among them ‘The Pink Panther Strikes Again’, ‘The Betsy’, ‘The Great Train Robbery’, and ‘North & South’, a wildly popular mini-series set in the Civil War-era south.

Of course, as Soaps.com readers are well aware, Lesley Anne also had previous daytime television roles, namely Olivia Richards on Sunset Beach, and Lady Sheraton on Days of Our Lives. She even had a six-episode arc on the iconic Dallas! Lesley has also graced the stage throughout her career, performing in ‘Hamlet’ and ‘Great Expectations’.

Lesley Anne’s fans on Soaps.com can buy or rent ‘Seven Days Grace’, but can also catch some upcoming appearances on television! ‘The Pink Panther Strikes Again’, also starring Peter Sellers, will air Friday, September 28th at 9:10am on Encore Mystery and 10:10am on Movie Plex. Down’s guest spot on ‘The Nanny’, starring Fran Drescher, Charles Shaughnessy (ex-Shane, DOOL) and Nicholle Tom (sister of Heather Tom, Katie, B&B), can be seen Wednesday, September 12th at 8:00am on Lifetime, and finally, the movie ‘Ladykillers’, also starring Marilu Henner, will be aired on Monday, September 24th at 12:45am and Thursday, September 27th at 10:00pm on Showtime Beyond.

Soaps.com readers, enjoy the month of September with the lovely and talented Lesley Anne Down!