Marcus's Big Blooper?
Sparks may have been flying between Marcus and Steffy at her photo shoot, but perhaps he shouldn't have gone so far as to take her into his confidence about what he saw at the party! Talk about a dog with a bone! Of course it was worth a giggle to see Steffy do the math and figure out that Oliver was with Brooke. You had to laugh when she realized she had Brooke right where she wants her at the end of Friday's show! Jacqueline MacInnes Wood does a great job with her role! Do you think Steffy and Marcus should be together? Vote in Soaps.com's Marcus and Steffy Snap Poll! 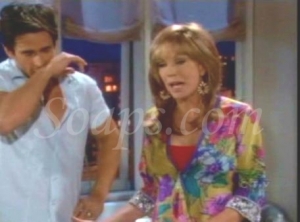 Credit: Got you! (Soaps.com)

Other than the fact that I’m over Brooke and Oliver’s endless run-ins and awkward conversations, it was a good week on The Bold and the Beautiful. Let’s see how it shakes out:

Cabin Chaos!
I loved the aftermath of the shooting at the cabin. Stephanie’s comebacks are legendary! How about when she called the Sheriff and told him she had an intruder and had to ‘wing’ him – hilarious! Stephanie’s abrupt acceptance of Brooke was a strange bit of writing, but her turnabout is the set-up for the Brooke/Oliver tryst coming out. I admittedly get tired of Stephanie’s ‘Brooke is a screw-up’ mantra – it would be nice to have a different twist, but on the other hand, it’s a classic rivalry that usually entertains. I look forward to seeing more of Pam and Stephen, as I found it intriguing that he admitted to having some genuine feelings for her.

One Big Kumbaya Family!
Best line of the week! Thank you Nick for acknowledging how bizarre it is that Jackie accepts Owen’s infidelity with her son’s wife, and that she is cool with Bridget having his baby! Moreover, I think Nick is on to something when he warns that Owen won’t stay with her after the baby is born – someone as eager as Owen is to be a father is going to be all over that baby, and therefore spending loads of time with Bridget! Uh oh!

The Bold and the Beautiful Video Promo: Haunted!

The Bold and the Beautiful Saturday Teaser Poll: Marriage on the Rocks!