Gunning for Godzilla!
Hilarious little turn by Mike the security guard this week. I'm enjoying the Stephen/Pam hook-up, especially the drama it's causing between Pam and Stephanie. Also, it was an intense end scene when Stephanie threatened Stephen on Friday! Wouldn't it be interesting if Stephen fell for Pam for real, and then Stephanie convinced her to turn the gun on him?! Fun and games!

It's a Miracle.
It will be a miracle if I can continue to watch this insipid storyline with Bridget's paternity secret unless something changes soon! They just keep repeating cheesy, unrealistic dialogue, and it's driving me crazy. Bridget should have told Nick before Owen found out - she's in deep doo-doo with her hubby now no matter how it comes out, and it will. I'm counting on it to spice up this storyline! 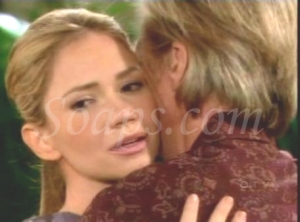 It’s been a controversial week on The Bold and the Beautiful, and quite entertaining at times. Here are some thoughts on the current storylines:

Big Shocker at Big Bear!
Low and behold, Stephanie finally decides to reconcile her past animosity for Brooke, just as Brooke is about to find herself in the middle of another scandal! Since Brooke thought she was having daring sex with her own hubby, she’s technically not guilty of anything malicious, (although she won’t win any awards for her chaperoning anytime soon), but she’s headed back into the bad books, that’s a given! Ah, timing is everything.

Anonymous Sex.
I’m not even sure what to say about the Brooke/Oliver storyline. Like some B&B storylines in the past, it leaves a lingering awkward, uncomfortable feeling – you can’t help but wish you didn’t have to go there. Although it is nearly impossible to believe that any of these people could be mistaken for another, apparently it happened, and Oliver’s facial expressions as he tries to comprehend it have been priceless! There have been some great lines coming out of the confused conversations too, and I get the great potential for conflict, but ultimately it might have been slightly more palatable if it had been Steffy who had managed to slip into Hope’s place. Maybe there will be a few twists yet to come. Speaking of Steffy, she seems strangely agreeable this week… What do you think of the mistaken identity storyline? Vote in the Brooke and Oliver Storyline Snap Poll!

The Bold and the Beautiful Video Promo: He Hates You!

The Bold and the Beautiful Saturday Teaser Poll: Eavesdropping!