Let's Rehash it Again.
I was starting to wonder how many times Jackie and Bridget could have the same hushed conversation, and how many times someone could find their interactions suspicious, before this storyline would crack open. Did you see those tears Bridget was crying with Owen today? I think she was relieved to be talking to someone other than Jackie!

Just Keep This From Your Husband...
And everything will be fine. I don't know about Owen's advice to Bridget today. I can think of a lot of ways to alleviate stress and create peace of mind, but keeping a huge secret from one's spouse isn't one of them!

Looking forward to next week! Be sure to let me know your thoughts in the comment section. If you’ve missed the show for the week, catch up with Soap Opera Fan Blog Bold and Beautiful Weekly Summaries and then feel free to cast your vote on our Soap Opera Fan Blog B&B Polls. 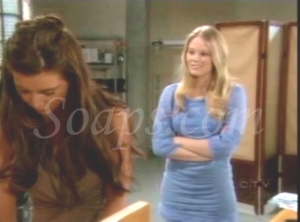 While some of the drama was good this week on The Bold and the Beautiful, I really began to notice the repetitiveness, and the heavy focus on one or two stories. Here are my thoughts on the week:

Generation Why?
It feels like the past two weeks have focused on little else besides Steffy, Oliver, and Hope! It seemed like every other scene was the teens kissing, or flirting, or doing a photo shoot. When they weren’t on, someone was discussing them – the older couples were even using bedroom time to discuss the details of Hope’s first crush and Steffy’s issues! I think the actors are doing a great job, and I don’t mind the storyline as it’s classic B&B, but where is everyone else and their storylines?

Whip De-Doo-Dah!
I was loving Whip this week! He seems to be just what the doctor ordered for Taylor.

Rick Trick.
I sort of like the idea of Rick messing with Steffy on Hope’s behalf, if only because it would add another layer to the triangle storyline.

Mind My Mantra.
The Forresters and Logans are so intermixed at this point that Steffy and Stephen’s mantras about getting revenge on the other family, or running them out of the company, seem a little tired and outdated. If you have issues with one person, fine, but the divided families stuff gets harder to buy into when everyone has been bedding, marrying, and having children with everyone else for a couple of generations. How do you feel about this? Vote in Soaps.com’s Logans Versus Forresters Snap Poll!

The Bold and the Beautiful Video Promo: I Can't Do This Anymore!

The Bold and the Beautiful Saturday Teaser Poll: A Flirty Email!