Moving On:
Now that Eric and Donna are done, it appears Eric has already moved on to Stephanie, who kept (maliciously I assume) calling Eric her husband to Donna, who isn't even close to being divorced from him yet. As soon as Donna left Eric, he was smooching his ex wife, so apparently he didn't need any time to mourn his marriage. Then there's Pam who was ready to pull a prank on a grieving Donna, by trapping her in the pest control truck. I don't enjoy the slapstick on the show and I especially didn't enjoy that scene after the day Donna just had.

Less is More:
I'm glad Steffy was kept to a minimum this week and that when she did appear in lingerie she wasn't trying to seduce Oliver.

So that's about it for me. This is my last blog for B&B. Candace Young, who previously covered B&B and who is The Young and the Restless writer for Soaps.com will be returning to this section once again, while I will now be covering All My Children. We're just shaking things up a bit. I've enjoyed sharing my thoughts here, as well as reading yours and I will continue to follow all the goings on with the Forrester, Logan, Marone, Knight and Jones families. 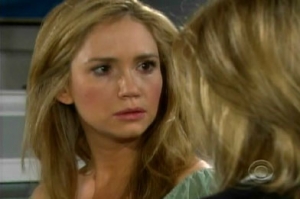 Credit: It's over. (Soaps.com)

There was no shortage of drama this week as Donna left Eric and Jackie discovered Bridget’s secret.

In Charge:
Jackie’s controlled rage regarding Bridget sleeping with her husband has been quite enjoyable to watch, as has her making demands on Bridget while playing on her guilt. The soapiness of Jackie forcing Bridget to lie about who the real father is is good fun, as is good girl Bridget being the one to be bad. This is also the most I’ve liked Owen and I’m actually glad it’s his baby since he wants one so badly. My only issue is that Jackie is only furious with Bridget and not her husband for their one night stand. Her comment that Bridget must have done something to make Owen love her just a little bit was a little infuriating to me. Let’s not forget, it takes two people to sleep together. Owen could have said no and just comforted Bridget, after Agnes lost the baby, like most normal people would have done instead of jumping into bed with her, or on the floor as was the case. I understand Jackie is much older than Owen and is probably insecure about her hot stud of a husband leaving her for someone his own age, but she shouldn’t only punish Bridget for the betrayal, or assume it was all her doing.

Taking a Stand:
Donna continued to make me feel her pain this week as she left Eric because he couldn’t put her first. I do not blame her and applaud her standing up for herself, even if it is due mostly to Bill’s overzealous support, which is becoming a bit much. I love Bill, but he needs to take it down a notch. I really wish they would utilize Katie more as well, especially since she doesn’t agree with what her husband is doing. That could add a whole other layer to the story as we could see what Bill’s drive and need for revenge does to their marriage.

The Bold and the Beautiful Saturday Teaser Poll: Dreams of the Future 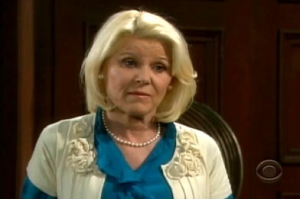