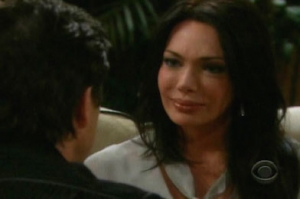 Nice to see you again. (Soaps.com)

Last week provided us with more of the Steffy/Oliver/Hope triangle, more Nick/Bridget/Owen/Agnes drama, Eric and Stephanie making out, and the return of Bill and Katie, but the best part of the week for me was Whip and Taylor.

Renewed Interest.
I have always loved Whip’s portrayer Rick Hearst and was happy to hear he’d be coming to B&B after his air time on General Hospital as Ric Lansing dwindled. However, I don’t feel B&B has truly used him to his potential, or enough, which let’s face it, unless your Ridge, Brooke or Stephanie, is bound to be the case for most of the cast, especially new cast coming in. So when they hooked Whip up with Taylor I was just happy to see him have something to do, but now I’m kind of hooked on the couple.

Love = Marriage.
Whip and Taylor are both so at ease with and seem to truly appreciate each other. Taylor is so much more fun and interesting when she’s not pining for Ridge and Whip is endearing and charming when his affections are returned. Now that they are getting married though (which is way too soon), I do fear, as is typical of B&B, that they will be put on the backburner, should their nuptials actually take place. However, it is my hope that we get to see more storyline for these two, especially since they are working at rival fashion houses.

Finally Stable.
Not only am I happy that Whip and Taylor are finding love, but the scene of them having dinner with Ridge and Brooke seemed to cement the fact that the latter couple is pretty solid right now. When Brooke saw that Ridge and Taylor were bonding over their past, she wasn’t worried for her relationship, just for Whip. It could all change next week, but it was a nice change of pace for Brooke not to feel threatened in her marriage to Ridge.

Forgetting the Past.
As for another couple who have been dancing around each other for years, Stephanie and Eric seem to be making their way back to each other. They too have an easy rapport and are a pleasure to watch in scenes together, but their history is so ugly that I can't imagine either one would want the other back in their life. I also felt Eric should have saved his tirade against Donna for when they were alone instead of humiliating her in front of her nemeses Pam and Stephanie. He had some valid points, but that was not the time to share them.

More of the Same.
Of course last week also had Bridget continuing to beat herself up about her affair, which is already getting old. However, I do like that Agnes now knows about the video and could potentially use it to her advantage at some point down the road.

Odds and Ends.
Here are a few other things that jumped out at me this week: If we can't see Marcus more, then at least it's nice to know he has moved on and found a girlfriend; I was happy to finally see Bill and Katie again; and I love, love Sarah Brown's (Agnes) new bangs, which really complement her. Also, Agnes made a comment about Bridget and Nick going off to Mexico, but I thought they went to the place where they honeymooned, which was Hawaii. Am I wrong or was that a blooper?

Well, that's all I got for this week. What are your thoughts? Are you enjoying Whip and Taylor? Do you want Eric and Stephanie back together? Voice your opinion on the latter question in our poll about An Eric and Stephanie Reunion and rant or rave about everything else below.