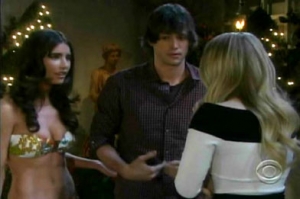 Right where she wants her. (Soaps.com)

It was a short week, as March Madness descends upon us and college basketball replaces B&B on Thursday and Friday. But as always, there’s still stuff to talk about.

The week started out with Hope reeling from witnessing Steffy and Oliver kissing. I thought for a high schooler, she handled it pretty well. She wasn’t melodramatic or immature, she simply threw out a few accusations at Steffy, which were spot on, and then walked out. Of course, Oliver followed her and they made up, but I’m not buying his claim that nothing was going on with Steffy. Clearly this is a triangle in the works and his kissing Steffy demonstrated there’s something between them. Behind all her scheming, I’m assuming Steffy will eventually develop real feelings for him as well.

I’m not entirely sure how old Oliver is supposed to be, but clearly he’s older than Hope, so I’m with Steffy and wonder why Oliver wants to go to a high school dance with her. Regardless, I think I like him with Steffy better. Hope is sweet and all, but I think Steffy is far more challenging for him and they have more spark than he does with Hope. I also like that Oliver is on to Steffy and knows she has an agenda where he is concerned, but still seems intrigued by her. However, I would like her to stop prancing around in her bikini. I mean, who goes to someone’s house, unannounced, dressed in one, at night?

As for Hope, I was mortified for her when Brooke finally met Oliver and called him out on kissing Steffy. Did Brooke not realize she was embarrassing her daughter by warning him away from Steffy and bringing him to task for kissing another girl? As for the other mother/daughter duo, Taylor had to confront Steffy about going after the boy Hope likes and urged her to go out with a guy who is unattached. It is pretty humorous how Taylor and Brooke are raising daughters who are so much like their nemesis.

Oliver did more this week than just bounce between girls though and regained ownership of the video of Bridget and Owen by emailing it back to himself. He also deleted it from Steffy's email, although she can probably still retrieve it, since he didn’t empty her trash bin. That's just a minor detail though. My bigger issue is, why does he need it and why did he play it again in his house? Clearly it was just so Agnes could walk in and see it, as there was no other reason why he would need to view it again, unless he gets off on that sort of thing. I was glad Agnes saw the video though, as it brings her into the sorted storyline and allows her to be on a more even playing field with the high and mighty Bridget, who just fired her. But it brings up two questions: What will Agnes do with the video? And does Bridget really have the authority to fire Agnes? Isn't she just a designer at Jackie M?

That's all I got this time around. What did you think about the abbreviated week's events? Who do you want Oliver with? Will Agnes tell Nick about Bridget's affair? Share your thoughts below.

The Bold and the Beautiful's Ashley...