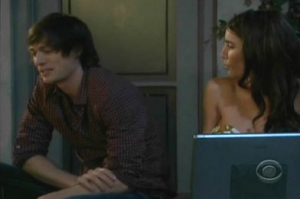 This week was all about Owen and Bridget’s guilt over sleeping together and Steffy figuring out how to use their tryst to her advantage.

Steffy getting clued in to the affair has me more interested in her than I have been in a long time. I’m still not loving how single minded she is about getting rid of the Logans and think she should be just as angry at her father for ping ponging back and forth between Brooke and Taylor, but I actually kind of liked her this week. If she could remain tough and not constantly cry about her daddy issues I could really get behind her scheming. Plus, her plan is tying into the Nick/Bridget/Owen/Jackie storyline and Hope and Oliver’s storyline, while remaining in Ridge and Brooke’s storyline. It’s nice when plots and characters intersect and aren’t completely isolated, which B&B tends to do a lot. Hopefully Steffy’s machinations will lead to more interaction between more characters, which would be worth it.

I’m also really glad Steffy seems to be over her Bill fixation, but where the heck is he? Bill and Katie really should be onscreen doing something. Especially considering Bill is hiding the secret of almost sleeping with Steffy, which she blackmailed him with to get the company back. Shouldn’t he be plotting his revenge while trying to keep his interlude with Steffy from his wife?

While I am more onboard with Steffy, I do wish she could do more than just blackmail people. I know it’s a soap staple, but it would be fun to watch a strong woman use her business smarts to get what she wanted instead of just holding things over other people’s heads.

I was happy to see Brooke and Taylor actually agreeing on something, which was scaling back Hope's workload at FC, as well as Ridge sticking up for Brooke regarding the Bedroom line, but Brooke and Ridge having sex at work, as his reward for siding with her, was too much. It's one thing to do it in your own office behind a locked door, but to get busy in someone else's office, in this case Eric's, where everyone comes and goes as if it's the break room, without locking the door, is really just gross. I totally supported Stephanie when she berated them for their behavior and thought their outraged reaction to her disapproval was extremely childish. I mean, couldn't they have gone to Ridge's own office or the ever-reliable steam room for some lovin?

Moving on to Bridget and Owen, they spent all week doing a lousy job of trying to hide their guilt over their indiscretion. It's truly written all over their faces, especially Owen's. At least they have the tragedy of Agnes losing the baby to explain away their odd behavior. For the most part I'm liking this development, but I really wish they didn't feel the need to spend all week hitting us over the head with how loyal and wonderful Owen and Bridget are to their spouses. We know they have been true blue thus far, so we know the impact their cheating will have. We don't need to be reminded every second of every episode.

As for Agnes, I would have liked to have seen more of her in the aftermath of losing the baby, and had her share a scene with Nick and Bridget about it. I wonder what they will do with her now. Will she still work at Jackie M? Will she continue to pine for Nick? Hopefully they'll think of something and not just trot her out once in awhile in a token scene like they do her cousin Whip.

That's all I got for this week. What did you think of the goings on? Are you enjoying Steffy's latest manipulations? What do you want to see happen for Agnes? Feel free to share your thoughts below.

The Bold and the Beautiful Alum...