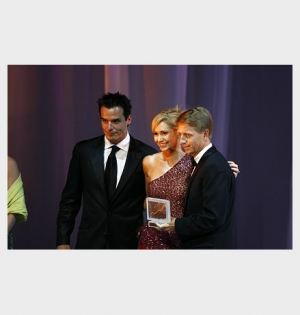 Jones and Sabato Jr. speak to the fans (CBS)

The Bold and the Beautiful is one of three nominees in the running for the 1st International TV Audience Award in the "Telenovela"/"Soap Opera" category. The awards are designated by viewers through the sum of the TV ratings across 5 continents. The award will go to the series delivering the highest ratings worldwide in 2005 in 51 territories internationally. The winners will be presented at the awards ceremony on Saturday, July 1, 2006.

A Beautiful Future for Griffin

Ronn Moss Is Not Leaving The Bold...