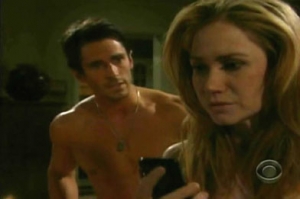 I was all set to completely hate Owen and Bridget hooking up, but I’ve found that I like the concept, but hate the way they’ve gone about it.

There will be tons of good drama to come out of this, not to mention, Jackie and Owen are finally getting a storyline again. I also like that Bridget is now the one to fall off the morality wagon and will have a lot of explaining to do when Nick finds out. It also makes me happy that Agnes will probably be pleased to learn Bridget has been knocked off her pedestal after the way she so harshly treated her for keeping secrets.

However, here are my problems with it: For one, Owen is head over heels in love with Jackie. Why would he cheat with Bridget, who he rarely interacts with? Secondly, Bridget just lost another baby. She is devastated and I’m sure not really up to the task of having sex. I know people grieve in their own ways, but grief takes its toll emotionally and physically. Give it a couple days (or maybe weeks, giving them time to bond over losing their dream of parenthood, rendering it plausible) and then I’m sure Bridget would need to seek out some comfort. But the very day she lost her baby? I don’t think so. Lastly, even if they were just swept up in the moment, I think they might have regained their senses when Bridget paused their interlude after hearing a noise. Wouldn’t Owen at the very least think, “Oh my God! What am I doing? This isn’t Jackie, my wife, I’m having sex with,” and put a stop to it?

And now Oliver just so happens to have a video of Owen and Bridget doing the deed? He didn’t know what he was shooting, or why, but did it anyway. So contrived.

Furthermore, the writers really could not have made it more obvious as to where this whole Bridget/Owen thing is going. I mean, how many times did Bridget mention Owen's desire to have a baby of his own? That, combined with all her talk about her own motherhood issues, can really only mean she will get pregnant. (That's not a spoiler, just my super soap senses tingling.) At the very least, it will turn into a who's the daddy storyline, but I really think with all the talk about Owen, he will end up being the father. Don't get me wrong, I like it, because it's totally soapy, as they are in-laws, but do they have to hit us over the head with what's going to happen?

As for the other storyline of the week, Steffy was up to her spoiled brat ways as she insisted work was where her and Ridge could have their alone time. It creeped me out how desperately she needed her father's attention. Steffy also gloated to Hope that they were dropping her campaign. That girl has done nothing to Steffy and I felt her attitude towards her stepsister was totally undeserved and made me like Steffy a whole lot less. I was glad Ridge refused to give Hope the boot (although I do think she needs to focus on school, as Steffy suggested), but still made it clear he loved and supported Steffy. Besides, shouldn't the decision about a campaign's future be something for all the owners to decide on, not just Ridge? Where was Eric and Stephanie in all this?

Steffy seems to be over Bill and now has her eye on yet another strapping lad, Oliver. Poor Marcus never catches a break. I really felt for him when they were at Insomnia, where Steffy wanted to get crazy (It's a coffeehouse Steffy, not a bar) and she was totally preoccupied with what Oliver was doing. So will Steffy/Oliver/Hope be the next love triangle? I guess Doc and Logan the next generation need a man to fight over too. For years and years…and years.

That's all I got this week. What did you think? How do you feel about Bridget and Owen? Do you want to see Hope and Steffy duking it out over a boy? Tell Soaps.com your thoughts below.