Country Singer Beau Davidson On The Bold and the Beautiful 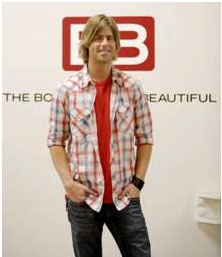 Whip already had a dress designed for the object of his affection, Taylor, but later this month, he one-ups himself with the help from country music singer Beau Davidson.

On March 30 and April 2, Whip brings in Davidson to serenade Taylor with a song Whip asked him to write, entitled, “You’re All I Ever Wanted.”

The song was actually written and composed by Frank J. Myers, Gary Baker and Zoran Konevic.

Davidson first came to Nashville’s attention with his single “More Than I Can Give.” He also wrote an honorary lullaby for Keith Urban and Nicole Kidman’s daughter, won CMT’s Music City Madness original song contest with “Mr. Wrong,” and was named one of Cosmopolitan Magazine’s Hottest Bachelors in 2009.

Are you looking forward to seeing Beau on B&B? Tell Soaps.com below.