The Bold and the Beautiful Daytime Emmy Pre-Nominations 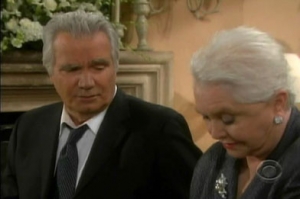 The Daytime Emmy Award Pre-Nominations have been announced! Read the list below to find out who was pre-nominated from B&B and get a refresher on their storylines from last year.

Don Diamont came to B&B in the middle of last year as Bill Spencer with one mission: to take control of Forrester Creations. The ruthless business man succeed and even allowed Katie Logan to chip away at his icy heart along the way, as they fell in love and got married.

John McCook as Eric Forrester was forced to deal with his son Rick sabotaging Forrester Creations and manipulating most of the family due to his anger at Ridge. Once that situation resolved itself, Eric was then dealt another blow when Bill Spencer came to town and took over Forrester Creations. In between all that, he kicked Stephanie out of Forrester and adopted Donna’s adult son Marcus to prove he considered them both family.

As Stephanie Forrester, Susan Flannery tried to prevent Rick from manipulating everyone, was kicked out of Forrester Creations, grappled with being on her own and getting older, started over at Jackie M, suffered a few mini-strokes and faced the death of her mother, Ann.

As Brooke Logan, Katherine Kelly Lang was faced with a son who tried to sabotage her relationship with Ridge. Even though he succeeded, she reunited with Ridge (after interrupting his marriage to Taylor while on a horse) and married him. She also had to deal with Bill Spencer taking over Forrester Creations, as well as the fallout involving her sister and husband. She of course battled Stephanie and Taylor along the way, as well.

Brandon Beemer as Owen Knight started working for Jackie M and began an affair with Jackie Marone. The two fell in love and despite everyone’s concerns that he was using her, they married and he proved to be a good husband. Owen was often comedic fodder during the risqué photos shoots for the fashion house, as well as by playing his twin brother, but he also showed his serious side, especially when he broached the subject of having kids with Jackie.

Kyle Lowder as Rick Forrester wreaked havoc for the first part of last year, as he fell in love with Steffy, tried to sabotage Forrester Creations and made it his life's mission to drive Ridge crazy. He was mostly absent for the latter half of 2009.

As Katie Logan, Heather Tom was forced to face the reality that her fiancé Nick was still in love with his ex-wife Bridget. Once they broke up, she developed a flirtation with Bill Spencer, which turned into love and they married. She also became the new CEO of Forrester Creations after Bill took it over, causing issues within her family.

As Ann Douglas, Betty White came back to town to visit her daughters so she could die from advanced pancreatic cancer in the most beautiful place she could think of: Paradise Cove. She spent her remaining days with her daughters, giving them all the closure they needed from their tumultuous relationship, and died peacefully on the beach.

Drew Tyler Bell as Thomas Forrester became fed up with Rick's power over the women in his family and blew up his car to scare him, but it ended up almost killing him. He spent most of the rest of the year sporadically showing up to collaborate with Steffy in an effort to get their parents back together.

As Steffy Forrester, Jacqueline MacInnes Wood fell in love with Rick Forrester and spent the beginning of last year defending their relationship. She spent the middle part of 2009 trying to get her parents, Ridge and Taylor, back together and the last half of the year working as the PR director for Forrester Creations, where she kissed Bill Spencer in an attempt to get FC back for the family.

What do you think of the list? Do you think someone else should be on it? Share your thoughts with Soaps.com below.

To find out who was nominated from your other favorite soaps, check out the full list of the 37th Annual Daytime Emmy Pre-Nominations.