I was furious with Ridge for backing Taylor up in her assertion that Brooke didn't support him when Bill first took over the company. Ridge should support his wife, not his ex-wife, especially in front of said ex-wife. Taylor keeps insinuating herself into their problems and Ridge really needs to draw a line with her. Thankfully, by the end of the week he declared Brooke was more deserving of being part owner than Taylor. I think I would have lost it if he had sided with Taylor or remained silent on the issue. He really is pretty spineless. He also needs to tell his daughter to show a little more respect to his wife. All Steffy does is badmouth Brooke and her family to anyone who will listen. If Steffy wanted to repair things for the family, she hasn't done a very good job of it considering Brooke is part of that family.

I really don't even know what to say about Brooke and Taylor's fight in the pond. Didn't we just see them doing the same thing in some mud a couple of months ago? I'm tired of them acting like immature teenagers fighting over the captain of the football team.

Moving on, it's nice to see the characters on the show in a different set every once in awhile, so I was glad to see more of Whip's place when Taylor stopped by, but does he really sleep on a pull out couch? Does the man who runs PR for a successful fashion house not have the money for an actual bed? And when Stephanie came to his place to 'rescue' Taylor from Brooke, she just walked in! Is she that close to Whip that she doesn’t have to wait for someone to open the door after she knocks, especially since his bedroom is the living room? Who knows what she could have walked in on.

More on Stephanie, since Agnes was her assistant at Jackie M, why wasn't she included in the meeting about Stephanie leaving? Considering Steph was supposed to take Agnes under her wing, I would have at least liked to have seen her say goodbye to her and maybe have a reaction to learning about her past. Also, now that Stephanie is out, what will Agnes do for the company? Assuming she survives her fall down the stairs that is.

I'll have more to say next week about the whole Bridget/Nick/Agnes story as things take an interesting turn when Jackie and Owen get more involved. If you're curious as to what happens, check out the spoilers.

Until then, feel free to share your thoughts on this week's B&B. Are you happy with how the battle for FC played out? Would you have liked Stephanie to have stuck with Jackie M? Tell us below. 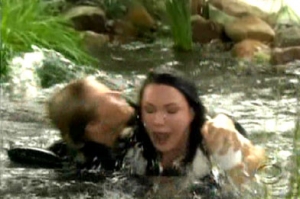 This week was mostly about Stephanie and Taylor deciding if they wanted to be part owners of Forrester Creations. Of course they both decided to come up with the money and accept their shares, but I’m really not happy with either one being involved with the company.

I know that Forrester is essentially Stephanie’s baby that she created with Eric, but I like her at Jackie M. I like the characters and storylines over there better and they totally embraced her when she was at her lowest point. Her relationship with Nick was sweet and I would have liked to have seen more of their surprising friendship. I fear with Stephanie returning to FC, it will just be more of the same old tired storylines. She’ll battle with Brooke, meddle in Ridge’s life, and, given the fact Eric told her he loved and needed her, might just get back together with her ex-husband. There were far more interesting possibilities over at Jackie M for her that could take her down new paths. Maybe I’m wrong, but I fear the past will just keep repeating itself.

As for Taylor, I’m not sure why she’d even want to be at FC on a daily basis. Does she really want to watch her nemesis with her ex-husband every day? She kept saying she wanted to secure her children’s futures, but with her lack of experience, does she really think she can do something for them Stephanie, Ridge and Eric can’t? Besides, Steffy and Thomas work there so I’m sure they make a good salary and have stocks or something invested in the company themselves. Not to mention, they don’t need their mommy coming to their rescue, especially since Steffy was the one to get the company back in the first place.

Basically, Taylor being part owner really just diminishes Steffy’s argument that Forresters should be running the company. I want to scream every time Steffy says that because Taylor is not a Forrester! If that’s what she wanted, why didn’t she make herself part owner? While not blood, Steffy is actually part of the Forrester family where Taylor is not. Or maybe Thorne and Felicia, who are actually Forresters, might have liked to have been included in the deal.

The Bold and the Beautiful Video Clip: Nick's Caught in the Middle

The Bold and the Beautiful Saturday Teaser Poll: What Does Bridget Do? 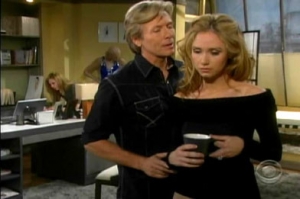