The Bold and the Beautiful Interview: Justin Baldoni

Justin: I'm totally open to it. I don't like to close any doors in my career. I'm still young (at least I feel young, haha) so I'm open to anything.

Soaps.com: You also directed the web series "The Walk to Fame" on MySpace. What can you tell us about it?

Justin: "The Walk to Fame" is a really fun web series that introduces Jason Derulo to the world. Jason had a hit song out called "Whatcha Say" but no one really knew his story or anything about him. So when they came to me about directing something for him, we came up with the idea for "The Walk to Fame." Jason is incredible in it, and rumor has it, it just got picked up to air on TV overseas so I'm really excited about it!

Soaps.com: Texas Battle (Marcus, B&B) also stars in it. Was his involvement a result of meeting him on B&B or did you know him before? Who does he play?

Justin: Crazy, right? Ironically no, Ryan Daily (Texas's Agent) is a close friend of mine and I needed a really good, comedic actor to play Jason's best friend and Texas agreed to do it. Texas and I became friends on the shoot and it wasn't a month later that B&B called. Just for that reason alone I knew I had to do it.

Soaps.com: You have a couple movies coming out: "Minkow" and "Unrequited." When can we expect to see them and what should we know about the characters you play?

Justin: Hopefully towards the end of 2010! I'm really excited about "Minkow!" It's a true story about Barry Minkow, who founded the carpet cleaning company ZZZZ Best in the 80's and took the company public. By 21 he was worth 300 million dollars, but it turns out it was all a Ponzi scheme (like Bernie Madoff) and he was actually stealing everyone's money. He went to jail for eight years, became a preacher and now works with the FBI helping catch criminals like himself. I had more fun making that film than on anything I've ever done! (besides on B&B of course.)

Soaps.com: Do you prefer working as an actor or behind the scenes?

Justin: It's funny, I've been getting that question a lot recently and I still haven't decided. If you ask me on a day I'm directing, I'll probably say behind the scenes. But I'm doing a film in Memphis right now and I'm having so much fun, so today I'm leaning towards acting. Ideally I would love to make my own films and play supporting roles in them, but I'm really just thankful to be working at all in any capacity.

Soaps.com: Any other projects in the works?

Justin: Yep! I'm doing a really fun movie called "A Fine Step," about Paso Fino horses that we're shooting in Tennessee. My good friend Jonathan Meyers is directing so we're having a great time. I love working with friends. It makes the experience that much more meaningful.

It's good to know we can catch Justin in so many other projects. For a look at the first episode of his web series, check out The Walk to Fame. If you missed our past interview with Texas, please visit Texas Battle Talks to Soaps.com! 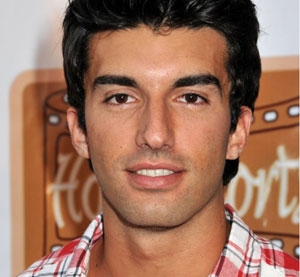 Justin Baldoni may only have been on B&B for a short time as Sandy, a.k.a. Agnes’, rapist Graham Darros, but his character certainly left a lasting impression on the canvas, as well as the viewers.

Even though his run as Graham is over, Justin is keeping busy with other projects, one of which has a B&B connection.

Justin recently took the time to discuss these projects with Soaps.com, as well as his thoughts on working in Daytime.

Soaps.com: How was your experience on The Bold and the Beautiful?

Justin Baldoni: I had a great experience on B&B. Great people, great crew…you can’t ask for more than that.

Soaps.com: Would you have liked Graham’s story to have lasted longer, or were you happy it was just a brief run?

Justin: To be honest I was really happy with the ten episode arch. When B&B originally called with the offer I already had two films lined up so timing wise it worked out perfectly!

Soaps.com: I was surprised to learn your character wouldn’t be seen again after Sandy finally confronted him and he was arrested. Did you feel your story arc needed any follow up episodes, or were you happy with how it played out?

Justin: I was really happy with how it played out! I think they were going for a little bit of a surprise with Graham actually going away to jail and not coming back like they do on a lot of shows.

Soaps.com: Any chance Graham will return to be redeemed or wreak more havoc?

Justin: I’m not sure, but it’s definitely something I would be open to, although the storyline would have to be really interesting. But he was pretty creepy so I have a feeling the world has had enough of Graham for the moment

Soaps.com: What, if anything, surprised you about doing do a soap?

Justin: The workload! I was shocked with the amount of pages we had to learn each day. I have to say, I have so much respect for all of the actors who do this every day; their brains are machines and it requires some tremendous talent to be able to learn that many pages and make choices that fast.

Soaps.com: Would you do another one?

The Bold and the Beautiful Video: The Walk to Fame

The Bold and the Beautiful Video Clip: Nick's Caught in the Middle