She has been considered a key figure in the development of the popular talk show genre which mixes celebrities with politicians and topical social challenges. From 1952-1986, she hosted the "The Lee Phillip Show" out of her native Chicago. The show was the first in history to do an on-air self breast examination. She has also produced as well as narrated award-winning programming that delves into subjects such as foster children, divorce, rape, and prison childbirths.

The NATAS Lifetime Achievement Award was bestowed upon her husband in 1992. Now, the Bells are the only married couple in history to have earned this award each in their own right. The Bells have three children. William J. Bell Jr., Lauralee Bell (who portrays Christine Blair on Y&R), and Bradley Bell (the Executive Producer and Head Writer of B&B).

Congratulations on this honor Mrs. Bell, and thank you for many years of entertaining and enlightening daytime TV!

Credit: B&B is one of Mrs. Bell's many accomplishments. (Soaps.com)

The National Academy of Television Arts and Sciences (NATAS) is giving the co-creator of Bold and the Beautiful a Lifetime Achievement Award — and with good reason! She and her husband, the late William J. Bell, created CBS ratings giants, The Young and the Restless and its sister soap B&B over the course of their amazing careers in television. Mrs. Bell has served as a story consultant for both shows, often making sure that the storylines shed light on social issues that touch the viewers’ lives. 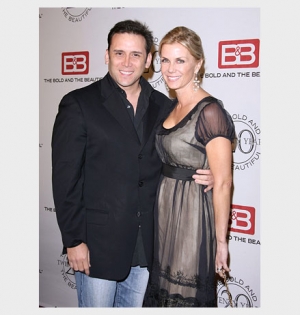