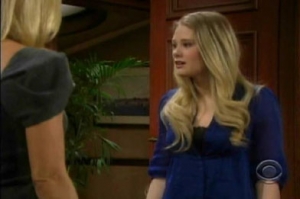 B&B Breakdown for the Week of January 25.

Even though we continued to get a lot of the same conversation we’ve been hearing for the last three weeks or so about Steffy, the Logans, etc., we also got a few other new things this week as well.

To begin with, I am so happy Ridge and Taylor’s kiss was all in her head and that they don’t seem to be going down that road again. At least for now anyway. I loved that she told him not to call her Doc anymore, and that even Stephanie seemed to accept Brooke in Ridge’s life. Those were good signs that they are moving forward, which means Taylor can move forward with Whip. His designing her a dress was lovely, as was the sentiment behind it that it represented her and how he saw her. I just wish they would have given them an episode to follow it up with. Maybe another date, just lunch, or her going to him to vent about what’s going on with Steffy. Hopefully that will come.

As for Ridge, he and Brooke had a delicate conversation while the door was left open, so Hope could inconveniently hear them say she was a mistake that Brooke was ashamed of. Okay, those weren’t their exact words, but that’s how Hope took it. I don’t blame her really, as Ridge was far too over the top in assuming the press would call her a ‘stain’ on the family name. That was an ugly and extremely descriptive way to put it. I understood what Brooke was saying though, as she should have felt ashamed being pregnant with her son-in-law’s baby, and Hope just misunderstood, but Ridge was a bit too dramatic. I was happy, however, that Ridge finally verbalized that he loved Hope as if she was his own, even if hearing him referred to as Dad by Hope is still a bit awkward.

I’m a little surprised Hope didn’t know Deacon and Bridget were once married. She apparently knows Deacon is her father, but wouldn’t at some point the fact that Bridget was once married to him come up? I guess not, considering the sisters haven’t interacted at all since Hope has been aged and I can’t remember the last time Bridget and Brooke had a conversation either, but that’s B&B for ya. I really would like to see Bridget and Hope sit down at some point and bond as sisters, or at least discuss Deacon. I really think it’s a necessary scene.

Mostly, I think they are blowing this out of proportion. I don't recall the exact details, but I'm under the impression the press already knows about Hope's paternity, so they probably already dissected it in the past and I would think they wouldn't make too big a deal about it now. Sure they'd talk about it, but I'm not convinced they would go so far as to call her a 'stain' on the family name. Like Taylor said, perhaps Hope should have been prepped about it and been told how she was conceived before any of it became an issue.

Hope of course headed straight for Sandy's number one rape suspect, Graham, after hearing how ashamed Brooke was to have been pregnant with her. It seems a little presumptuous to ask an older man she barely knows for a place to stay, especially when she could have called Katie, Bridget or Steffy instead. But then I guess we wouldn’t have the fear that Graham is going to rape her. I don’t think he's the culprit though, as I think it's his buddy who Hope met at the party when they first walked into his loft. Sure Graham is a bit smarmy and has no qualms about plying underage girls with alcohol, but I think he's too obvious to be Sandy's attacker.

Nick's attempt to get Graham's DNA was truly annoying. I get what he was trying to do, but if I were Graham and Nick kept going on and on about how great chewing gum was, I would have turned down his job offer and thrown him out of my loft.

I am very happy Steffy seems to be letting go of her resentment towards Hope. Even though she may have shaken up the pop (or soda, depending on where you live) can so it would spray in Hope's face and initially got upset upon hearing Hope call Ridge Dad, it feels like she is open to a relationship with her stepsister and putting the animosity behind them. I really hope so because I don't like this vindictive Steffy and would like to see these two young women become friends, especially since neither one has any.

I enjoyed Oliver and Sandy's bonding scene, but would really like to see more of them. It was such an isolated moment and since that's all we saw of Oliver this week, it was a little out of left field. Again, a follow up scene with him in it would have been nice.

Next week should be interesting as Hope will be placed in peril and Sandy's rapist will be revealed. Bridget should start to become more involved as well, as she starts to figure some things out. Now if we could just get Bill, Owen and Jackie back on our screens all will be right in my world.

That's it for me this week. What did you think? What will happen to Hope? Will Sandy's rapist be caught? Share your thoughts on all things B&B below.