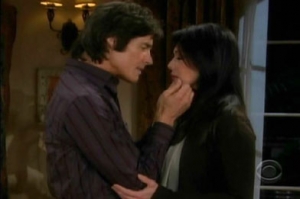 This week seemed exceptionally boring to me. Especially after the intensity of Bill and Katie finding out about the attempted coup, this was a bit of a let down. I think part of the reason was that Bill wasn’t on much, but mostly it was because all we heard was repetitious dialogue from Ridge and Steffy declaring war on the Logans and vowing to get the company back.

Aside from the repetition, the dialogue was also pretty questionable. Ridge kept calling Brooke’s family ‘The Logans’ and declared to her he wouldn’t allow them to run his company, blah, blah, blah. Did he forget he married a Logan, you know, the woman he was badmouthing them to? It sounded so odd, like he was referring to a family neither one had anything to do with. He also kept making the distinction that Hope was Brooke’s daughter, yet, she calls him Dad. Even though we haven’t seen the bonding onscreen, if we’re to believe she thinks of him as her father, the logical assumption would be that he thinks of her as his daughter. If that is the case, I would have to believe he wouldn’t be so quick to basically slam her in favor of Steffy. At the very least, he should be more understanding and sensitive to the fact that Hope is part of his family too. Also, Taylor and Steffy were both furious that inexperienced Hope’s campaign was chosen over Steffy’s, but didn’t Steffy come from shipping and receiving with relatively no PR experience herself? And when Hope told Steffy she wanted to learn from the best, meaning Steffy, I wondered how Steffy earned that distinction considering she only has one campaign under her belt.

As for Taylor, her involvement in Steffy’s work life once again annoyed me. I couldn’t believe she stayed in the office to watch, as Brooke and Ridge argued about the Hope/Steffy situation. It really was none of her business. Then she hightailed it over to Stephanie to fill her in and got irrationally riled up. It was really too much. Her scene with Whip was sweet, proving they have chemistry, so I would really like to see her move on with him instead of continuing to obsess over Ridge. Besides why is she giving Ridge so much of herself after he left her again for Brooke? I am choosing to believe their kiss at the end of Friday’s episode is all in Taylor’s imagination. If not, and Ridge changed his mind again about who he wants to be with, to use his words, I am officially done with him.

The little bit we did see of Bill this week left me on the fence. On the one hand, I was relieved he didn't make too big a deal of his attraction to Steffy when he was talking to Justin, but on the other, I can't believe he'd even be tempted. I was amused by poor underused Justin's reaction though: "I don’t want to be in a ten mile radius when Ridge finds out his daughter has the hots for you." I was so happy Bill sided with Katie on which campaign to go with, which was a message of sorts to Steffy that she does not have the pull over him she thinks she does. But then she asked him to put her in control of FC. Really? If she thinks Katie doesn't have the resume to be in charge, what makes her think she does?

We got to see a little more of Graham this week. His interest in Hope, and Sandy's visceral reaction to seeing his photo was obviously supposed to make us think he is her rapist. I really hope he's just a red herring though. After seeing him and Steffy at Insomnia, I'd like to see them explore a pairing between those two.

We also met Sandy's brother Oliver, but since their scene in Stephanie's office only served to reinforce how far Sandy has come emotionally, he didn't make much of an impression on me. However, my interest was piqued when he interacted with Hope on Friday. He seems pretty charming and these two could be interesting as well.

I'm really glad B&B has added so many new characters, even if they really don't have the time to devote to them, as well as their established cast. I am hoping they focus on the newbies more (of course by having them interact with the veteran cast) and get away from the tired storylines they've relied on for years, such as the Brooke/Ridge/Taylor triangle. I had high hopes with the takeover storyline, but now that it's done, it's right back to the same ole same ole. Maybe with the new faces, we'll get away from that a bit more. One can dream.

What do you think about all the new characters?

That's it for me this week. What did you think? Was Taylor and Ridge's kiss for real? What do you think of Graham and Oliver? Feel free to share your thoughts below.