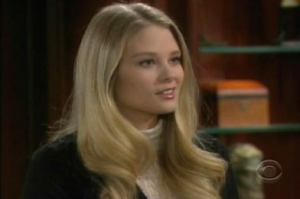 B&B Breakdown for the Week of January 11.

This week we were introduced to a new character, an aged character and the continuation of a long-standing rivalry.

I was happy to see Katie and Bill patch things up at the beginning of the week and openly talk about their feelings. Even though Bill kept his kiss with Steffy a secret, they were honest about their feelings and explained how they deal with things due to their childhood scars. I was really glad they didn’t let their nasty argument get in between them and liked the realness of the scene. Now if only Steffy would stay out of their way.

Speaking of, I’ve really had enough of Steffy hitting on Bill. When she went into his office to caress his face, which Katie of course saw, I couldn’t tell if the character or actor intentionally left the door open. It made me laugh how obvious it was regardless of who did it. This of course allowed Katie to see said caress, which she became infuriated with Steffy over. I don’t blame her for being upset with her step niece, but Donna did have a point that Bill should really put a stop to it.

I found it interesting that Thomas went to Taylor all worried about Steffy and her choices, when he is the one who encouraged his sister all week to use Bill’s interest in her to their advantage. He left all that out of course, but told Taylor about Steffy going off on Brooke, prompting her to race to her daughter’s side. While there, she learned Hope was hired on as the new intern and in true Taylor fashion, butted in where she didn’t belong. She doesn’t work for the company nor is she in the fashion business, so why does she feel the need to constantly put her two cents in? Furthermore, can’t they just let the Taylor/Brooke feud die? Brooke and Ridge are married and Taylor is beginning a new relationship with Whip. Let’s move on already!

Now that Hope is working at FC, Steffy is jealous because she wants her daddy all to herself. I understand her feeling needy for her father's attention, but to pout at work and demand his stepdaughter not work at FC so she can lap up whatever scraps Ridge throws her way was a bit much. First of all, Forrester is filled with other Forresters and Logans, so how can work be their special place? Secondly, she needs to grow up and act like the adult and PR director she is.

Then there was Ridge. He again just sat in the background while everyone fought over him and did nothing to try and ease the situation. He needs a backbone. Although on Friday he finally declared he had enough, but what did he mean by, 'It's over'?

As for Hope, I'm glad they aged her, as it will give the family new drama to deal with, but I'm not sure I like the instant rivalry with Steffy. It makes sense Hope would call Ridge 'Dad' I suppose, but it was a bit jarring to hear it since, as far as I've seen, Ridge rarely interacted with her as a child and it was never really clear who she considered her father. It certainly paves the way for Steffy to have issues with Hope though and I like that Katie wants to use her to get back at Steffy, but passing the Logan/Forrester feud to the next generation feels pretty forced. This aged Hope has only been onscreen for a couple of days and Steffy already has a problem with her. I would like her dislike to come from somewhere other than just that she's a Logan and have their rivalry unfold a bit more organically, as they say.

Moving on to the other story of the week, Sandy got her first ultrasound, prompting her to literally reach out to Bridget and, more symbolically, Nick. However, the better scene in my opinion was Sandy finally telling Whip she was raped at that party they went to five years ago. I was happy to see Whip finally be clued in and watch the cousins bond. I love that he continues to call her Aggie, which is how he knows her, and that he was so supportive of her. Now that they've remembered Graham Darros being at the party, who also just happens to be the photographer Steffy hired, I wonder if he will be the actual rapist or just be able to help them find him. I hope it's the latter, because it would be way too easy and obvious if he turns out to be the man who attacked her. Besides, he is very nice to look at and I hope he sticks around, but it will be hard to enjoy him if he turns out to be such a despicable character.

That's all I got for this week. What did you think of the events? Are you feeling the Steffy/Hope rivalry? Is Graham the man who raped Sandy? Tell Soaps.com what you think below.