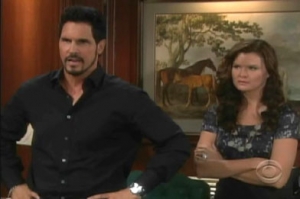 B&B Breakdown for the week of January 4!

Between Sandy’s devastation, Bill’s tirade and Owen being dubbed a grandfather, viewers were put on an emotional rollercoaster, which made it a great week.

The Truth Hurts
Katie finally discovered the truth about the Dare line with a little help from Jarrett, which I loved. It made sense she would turn to the man who has been covering Forrester designs for his whole career and could look at it with an unbiased eye. His reaction to the tacky collection was priceless (“What have they done?”) and gave Katie the confirmation she’s been looking for. I’m mostly happy about this because Katie was smart enough to actually get to the bottom of it, while business mogul Bill was content with just letting it play out.

Once Bill was filled in about the sabotage attempt, all heck broke loose and it was a beautiful sight to behold. He lashed out at the Forresters, but seemed to really hone in on Brooke and Donna. Just about everything he said was pretty dead on and what many fans have been saying in the message boards for years.

Of course this led to Bill and Katie having one doozy of a fight, but it makes sense she would defend Brooke and Donna, because after all, they are her sisters and she can’t have anyone badmouthing them. I actually do get that. She hasn’t forgiven them though, as evidenced by her hysterical rant at them after she walked out on Bill, but she had nowhere else to go, because as she pointed out, they are her only friends.

I love that Bill remains the ruthless man he came to the show as. Yes he loves Katie, but that hasn’t changed him into a wimpy, whipped husband. He continues to tell it like it is, even if it hurts his wife’s feelings, because he’s protecting her. That’s who he is and it’s nice to see a man be a man and not be reduced to mush over the love of a good woman.

Ah, how I hate Steffy right now. I don’t like that she slinked over to Dollar Bill's place and again planted a hot juicy kiss on him, which he sadly returned this time. I really don't believe he would be interested in Steffy because she isn't even close to being in his league. She tries way too hard and as he so aptly put it, she's just a confused little girl.

Sandy's Anguish
Sarah Brown had me in tears when Sandy was overcome by the vast amount of rape kits that had never been tested. Her running from one kit to the next, urging Lt. Baker to get them tested so those women could finally have justice, was very moving. It's truly unbelievable to think so many cases are never fully looked into because there isn't enough money to test DNA in such 'low priority' cases.

While I was riveted at the beginning of the week, Friday's scenes between Nick and Sandy left me flat because it was mostly repeat dialogue. The only new piece of information was that Lt. Baker couldn't match the DNA in Sandy's kit with anyone in their system. Not a surprise there. Of course, Nick promised to get Sandy through this and that she would open her heart again. Be careful what you wish for Nick, because I think her heart is opening to you.

Grandpa Six Pack and Grandma Stephanie
Nick and Bridget thanking Owen for filling them in on surrogacy and Nick admitting he was wrong about him was really cute. I loved all their 'grandpa' presents for him, but again, seeing Jackie and Owen was really just a tease because I want to see more of them in their own storyline and not just being a happy couple who props others up.

Bridget also asked Stephanie to be a grandma to her baby, which was really sweet, but after she briefly recounted Steph and Brooke's history, it's pretty comical to think that would ever happen. When you watch every day, it can be easy to forget all the despicable things people on soaps have done and believe characters have moved on and mended fences. However, when people's crimes are listed and you are forced to remember every bad thing they've ever done, it reminds you that it would never happen in a million years.

That's it for me this time around. What did you think about Bill's smack down of the Forresters and Logans? Were you moved by Sandy? Let me know what you think, whether you agree or disagree with me.