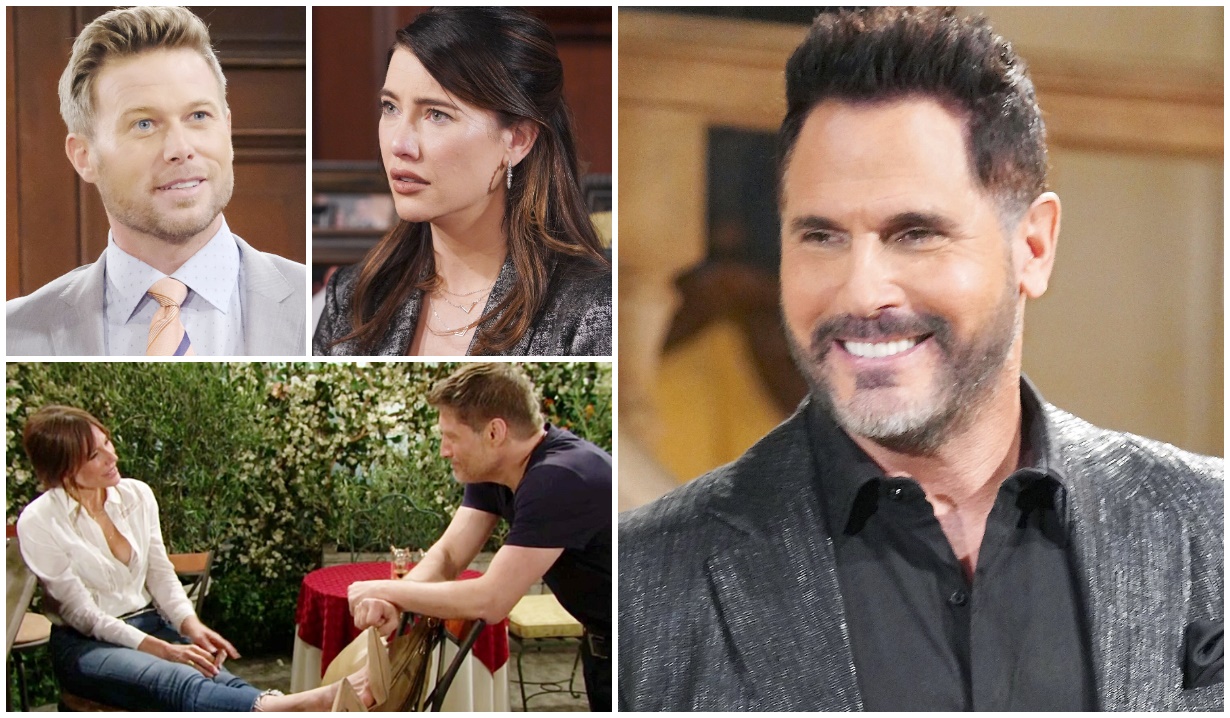 Get the scoop on “Quarter”, “Bridge”, “Dealor” and fan favorite characters who have gone MIA.

At a recent party for her Beverly Hills clothing store, Benheart, Katherine Kelly Lang did an Instagram live session that showed not only all the fun and fashions at the gathering, but revealed some juicy nuggets of soapy goodness for fans of Bold & Beautiful as well.

Lang showed off the walking cast she’s been sporting after breaking her ankle and retold the story of walking her horse on an uneven trail when her ankle rolled and she went down. She confirmed the horse was fine, when asked, and said it was only she who sustained an injury.

When it came time for an impromptu Q&A session on Bold & Beautiful, producer Casey Kasprzyk was on hand at the bash to help Lang field fan inquiries. Among the first was, “Why does Ridge always go back to Brooke?” to which Lang joked, “Why does the moon shine?” Meanwhile, Kasprzyk offered up the party line, “Because it’s their destiny.” The big ‘D’ folks!

Another fan wanted to know, “Are Carter and Quinn going to stay together?” Lang mused about not being able to give away future story, but noted, “They have good chemistry.” Kasprzyk teased, “They’ve been going on long bike rides together,” alluding, of course, to Quinn taking to a bicycle to make it to the church — er, restaurant — on time, to stop Carter from marrying Paris. Something tells us she won’t be keen to get on a bike again anytime soon! 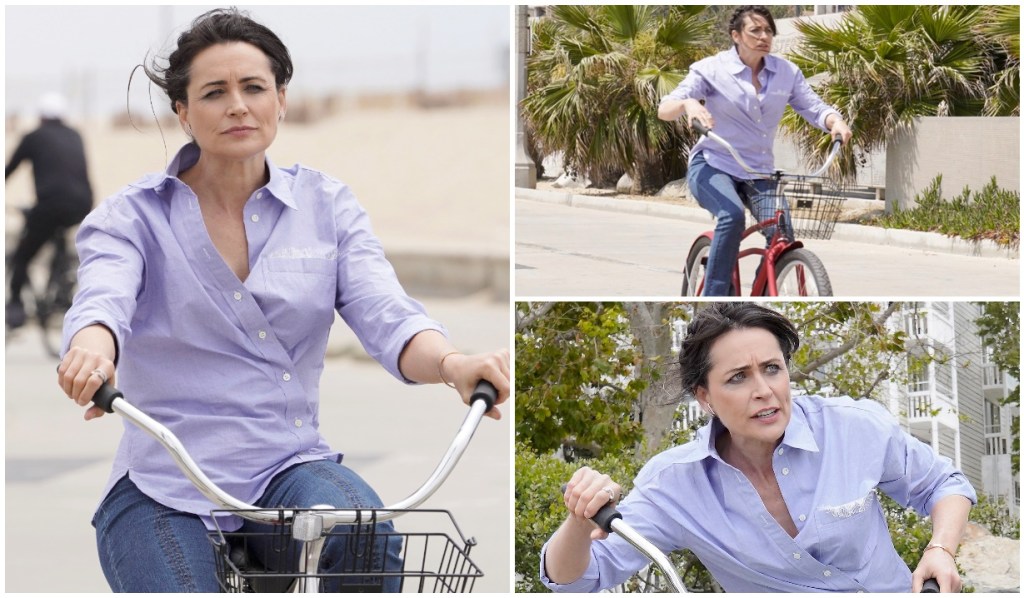 Next, someone asked if “Kelly will find Sheila,” meaning Brooke, but unsurprisingly, they wouldn’t give anything away as to how the she-devil’s story will play out. We have to wonder if the explosions and helicopter drama teased in Monte Carlo will figure into the climax.

More: Brooke’s clue could bring down Sheila for good

The hot question right now — “Will Deacon and Taylor get together?” — caught Lang and Kasprzyk’s attention and they both let out a delicious “Ohhh” in unison in response. Lang did a little dance but couldn’t speak on it as someone off to the side said, “It’s a spoiler.” They did try out a few potential ship names for the pairing such as “Dealor” and “Taycon.” The vibe was that they like the idea, and they’re not alone. Find out what Sean Kanan and Krista Allen said about Taylor and Deacon here.

Next up was a question that has been on a lot of long-time viewers minds in recent months: “Are we going to see more of Dollar Bill? Don is a great actor.” Happily, Kasprzyk confirmed “He’s got some story coming up,” and then added, “A big part of the story actually,” before whispering something to Lang. Oooo, we can’t wait.

One fan wanted to know, “When is Steffy coming back from materinity leave?” “The end of July,” said Kasprzyk as Lang puzzled, “Isn’t she back?” Presumably, the end of July is when we’ll first see Steffy back on our screens regularly, although it could be pushed into August now what with so many pre-emptions.

The answer to the question, “Any idea if Rick’s character will ever return?” was a firm, “No” from the producer, who added, “Rick is holding down the fort at International.”

Also, in the Q&A, there was some talk of how RJ needs to come back, which had Lang fist-pumping to show her approval of the idea, and joking of her onscreen son’s exit, “He went up those stairs and never came back.”

Lang was asked who was her favorite love on the show, but dodged the question. Donna and Paris were also raised during the fun session. Watch the video clip for yourself below:

After the share, Kimberlin Brown (Sheila) hopped into the comments to say, “Wish I were there!” to which Lang replied, “Next time! Hope your foot feels better!” The actresses, it seems, are both nursing injuries of the same nature.

Which of the storyline teases was your favorite? Give us your take on the tea spilled at the Benheart party in the comments below.

Look back on Bold & Beautiful’s sexiest swimsuit shoots of all time in the photo gallery below.

<p>Darin Brooks is casual and very cute in his neutral boardshorts and cool button-down in a palm tree print. Wyatt’s no wallflower!</p>

<p>Reign Edwards rocked this bold print with high-waisted bottoms in a lace-up style back when she did a photo shoot as <em>Bold & Beautiful’s</em> Nicole. A cool sleeveless cover-up and playful prop completed the look.</p>

<p>Matthew Atkinson’s muscles might have distracted us from his surf shorts if not for the pop of red, which is the perfect color to complement his dark good looks. We could watch our Thomas catch waves all day!</p>

<p>Throwback Thomas, aka Adam Gregory, looked fine all oiled up on his machine in Cabo San Lucas. His turquoise boardshorts matched the water… and his eyes!</p>

<p>Scott Clifton cuts a fine figure in a crisp white button-down and navy shorts. We love to see him in the sand among the cacti, even if our relationship with his alter-ego, Liam, is a bit, er, thorny.</p>

<p>Tanner Novlan and Jacqueline MacInnes Wood’s to-die-for physiques show off her sexy low-cut one-piece and his khaki boardies to perfection. All this beachy beauty makes us extra happy that these <em>Bold & Beautiful</em> characters live in Malibu!</p>

<p>Remember this “on location” fashion showdown? Perhaps the question should be, “How could you forget?” Courtney Hope’s Sally was totally Spectra-esque in her bold swim wear and red sunnies, while Jacqueline Wood’s Steffy modeled a more understated, but no less stunning, salmon two-piece with a criss-cross top. Pierson Fode’s Thomas stole the show in the center with his picturesque trunks and boat shoes.</p>

<p>We’re throwing it back to Cabo San Lucas again when Jacqueline MacInnes Wood’s Steffy worked overtime in her snakeskin bikini to keep Scott Clifton’s Liam from spotting Hope. At this point, Liam was still oblivious, calm and looking cool in his low-slung boardshorts in a yummy blue hue. </p>

<p>These bushes of tropical blooms are beautiful, but Annika Noelle is downright gorgeous posing amongst them in a playful, floral off-the-shoulder number and a lacy ‘n’ light skirt in a neutral cream color. Hope For the Future beach line, anyone?!</p>

<p>Darin Brooks’ Wyatt and Kim Matula’s Hope looked every bit the intercontinental couple whilst soaking on the yacht back in the day — from their hip shades to their classic swimwear in complementary shades of blue.</p>

<p>Lawrence Saint Victor, as Carter Walton, has been burning up the small screen on <em>Bold & Beautiful</em> in his sensual scenes with Quinn. So, while we’ve been catching eyefuls of his marvelous muscles on the regular, it’s an extra treat to ogle him in these brilliant blue board shorts ready to ride the waves!</p>

<p>The late Caroline, aka Linsey Godfrey, took “simply” stunning to a new level in this jet black bikini. In this throwback, her hipster bottoms and triangle top with gold embellishments on the straps brought all the boys to the Forrester pool… or at least Thomas and Rick. </p>

<p>Dollar Bill’s sons are certainly showing off their fashion “cents” in these on-trend swim trunks. Yes, there are trunks in the photo, people! Not we’d blame you if you didn’t notice what with the Spencer brothers all buff, bared and beach-ready. We only have one question: “Where are their sword necklaces?”</p>

<p>Old school Steffy and Marcus (Jacqueline MacInnes Wood and Texas Battle) shared a sweet smooch by the sea in this throwback photo. She sported a string bikini in a buttery yellow, while he went with classic surf shorts in blue and white Hawaiian tropicals. Cliff-side splendor!</p>

<p>Katrina Bowden shows off her luscious figure as she poses on tipee toes in a lime green two-piece that takes us back to another era. We can’t get enough of the lush colors in this shot — the newest Logan is pin-up perfection!</p>

<p>This throwback gives us a <em>Charlie’s Angels</em> vibe — or a harem — but either way, it’s a fun and gorgeous shot of the Logan girls and one of the men that has touched all of their, erm, lives. Brooke, Katie and Donna are knockouts any day of the week, but in these jaw-dropping jewel-toned bikinis they were spectacular. Exotic beach babes!</p>

<p>While we saw this figure-hugging maillot earlier in the gallery, it and Jacqueline MacInnes Wood (Steffy) are worth a second look. Featuring a low-cut vee, modest hip, and tiny tie to accentuate the waist, this one-piece wonder is positively eye-popping when set in front of a background of coral, pink and red blooms on the beach. Cha-cha-cha!</p>

<p>Not even summer itself can bring the heat like <em>Bold & Beautiful’s</em> Jackie M and Owen once did. In this steamy shoot, Lesley Anne Down cools off with a tropical drink in her strapless island-inspired beachwear, while Brandon Beemer backs up his lady love whilst showing off his toned bod in vibrant blue boardies. Can we borrow that fan?! It’s hot in here!</p>

<p>Hunter Tylo’s Taylor was definitely throwing a Bond Girl vibe in this super sexy cut-out swimsuit back in the day. Though it’s brown, there’s nothing basic about this delicious chocolate hue, and the cute peek-a-boo cover up let’s us see <em>exactly</em> why Taylor was always able to catch Ridge’s eye!</p>

<p>Thomas dropped to one knee and popped the question to Hope on their trip to Cabo San Lucas. They didn’t end up tying the knot, but it was worth the effort just for this photo of Adam Gregory in his teal board shorts and Kim Matula in her teeny weeny purple bikini. Simply surf-sational!</p>

<p>We’re thowing it back to Monte Carlo in 2008 with this shot of Jennifer Gareis, who is an absolute vision sun-tanning on the aqua deck of a yacht with her designer shades at hand. Donna’s blonde higlights and barely-there bronze bikini photographed against the sunny backdrop of Monaco is just <em>dazzling</em>!</p>

<p>We couldn’t resist tossing in this group shot of the Forrester Creations creatives posing together to showcase a new line of beachwear in 2017. From surf wear to sarongs, each and every look was pool-side perfection! From left to right: Nicole, Carter, Rick, Maya, Ivy, Thomas. Front: Steffy and Sally.</p>

<p>Gorgeous Diamond White’s cornflower blue two-piece is perfectly set against a backdrop of tropical oranges and pinks. Falling off one very sexy shoulder is a casual shirt-style cover up in pinstripes of lemony yellow, pale blue, and fuchsia. Paris in paradise!</p>

<p>Aly Forrester was not known for her love of revealing swimwear, and had a particular dislike of lingerie, but falling for Oliver was a revelation for the young woman, and they loved to spend time poolside together. Ashlyn Pearce is classically beautiful in this understand, yet sensual, black one-piece with an ever-so-slightly teasing chevron pattern. A toe dippin’ darling!</p>

<p>Flo seems to be thinking, “‘Shore’, Wyatt,” as she looks at her always joking fiancé in this beachy keen pose on the sand. Here we get another look at Katrina Bowden’s lime green retro inspired two-piece with white buttons and a scoop style top — and our “buoy” Darin Brooks with his linen palm tree button down, well… unbuttoned. Let’s hope there’s no hazards ahead for these beach lovers!</p> 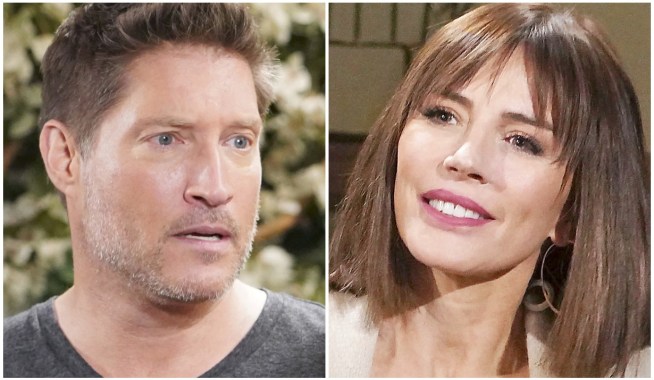 As Bold & Beautiful’s Krista Allen Urges Fans to ‘Get Ready’ for Taylor and Deacon, Sean Kanan Takes Their Connection to the Next Level

Her Life in Pictures: As the Daughter of Bold & Beautiful’s Tanner Novlan and Kayla Ewell Turns 3, Look Back on Memorable Moments, From Precious Firsts to ‘Sunday Snuggles’ 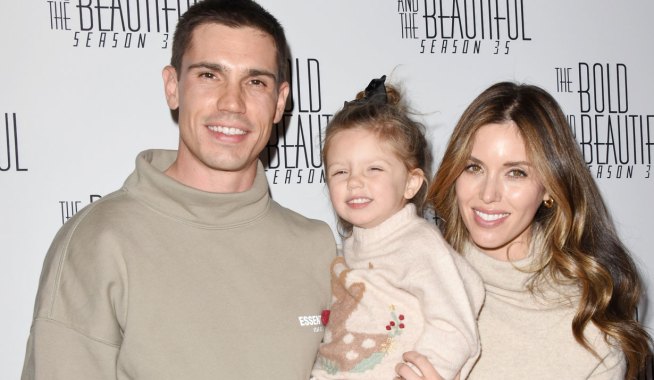