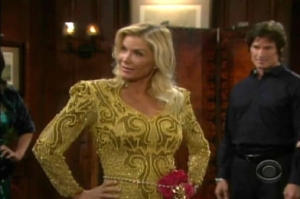 B&B Breakdown for the week of December 28!

Before I get to this week’s events, I thought I’d touch on the Christmas episode since I left for vacation before I could watch it last week.

So here are my brief thoughts on Christmas B&B style…

I wonder if Sally not sending Stephanie her yearly Christmas card is an indication that they will address the fact that the actress has passed away. I like that they’ve kept the spirit of Sally alive after Darlene Conley’s death in 2007 by referencing her many travels, but could it be they are finally ready to give her closure?

Owen and Jackie’s scenes made me realize how much I miss them. They’re such a fun couple and need to be on more.

All of Thorne’s worry about Stephanie was pretty much a waste of time considering Stephanie was having a great time at Jackie M. It was nice someone in her family was thinking of her though.

Nick was cute singing to the kids, which, if you watched Days of Our Lives last week and listened to Nathan read to the sick kids at Salem hospital, was a heck of a lot more fun.

And now on to this week…

Let's talk about the Dare line first. The dresses were exceptionally gaudy and reminiscent of "Dynasty," which is exactly what Eric and Ridge were going for. I've said this before, but I'm really glad Bill and Katie aren't blindly going along with the Forresters' vision. They know the designs are awful, but since they aren't designers themselves, they are giving the Forresters creative license. Although, I would think as CEO of a fashion house, Katie might want to do some research herself and figure out if these designs are in fact cutting edge.

Even though most of the week with this storyline seemed like repeat dialogue (how many times can Eric and Ridge reiterate their plan?), we did get a couple of new fiery lines courtesy of Bill, as he dryly quipped that he needed sunglasses when she saw Steffy's dress and that he couldn't look at any more designs because his eyes were full. Hilarious.

Regarding Sandy's storyline, we saw a lot more of her pain this week and of course Nick helped her through it. I really do like their relationship, as he so gently and sweetly supports her and she reluctantly allows him to. They have a nice chemistry and I'd like to see them eventually get together, if it weren't for Bridget. While I like the current Marones as a couple, I mostly don't want Sandy and Nick to hook up because I don’t want to see Bridget get hurt again. Although, once she learns they've been keeping this huge secret from her, I'm sure she'll feel betrayed.

Sandy's story is also highlighting the plight of real women who've been raped and how they're treated in the system. Wednesday's episode with the rows of unopened rape kits was the beginning of what this story is supposed to shed light on. So far it's been well done and doesn't feel like a forced PSA, and from what I've read in interviews with Sarah Brown (Claudia), the details, facts and figures will be pretty eye opening.

We've had a couple of short weeks due to the holidays, but starting next week it's back to fulltime soap watching! I hope you all had a wonderful holiday and have a fantastic New Year. Keep an eye on our Spoilers for what's to come on B&B in 2010.

The Bold and the Beautiful Poll: Bad...