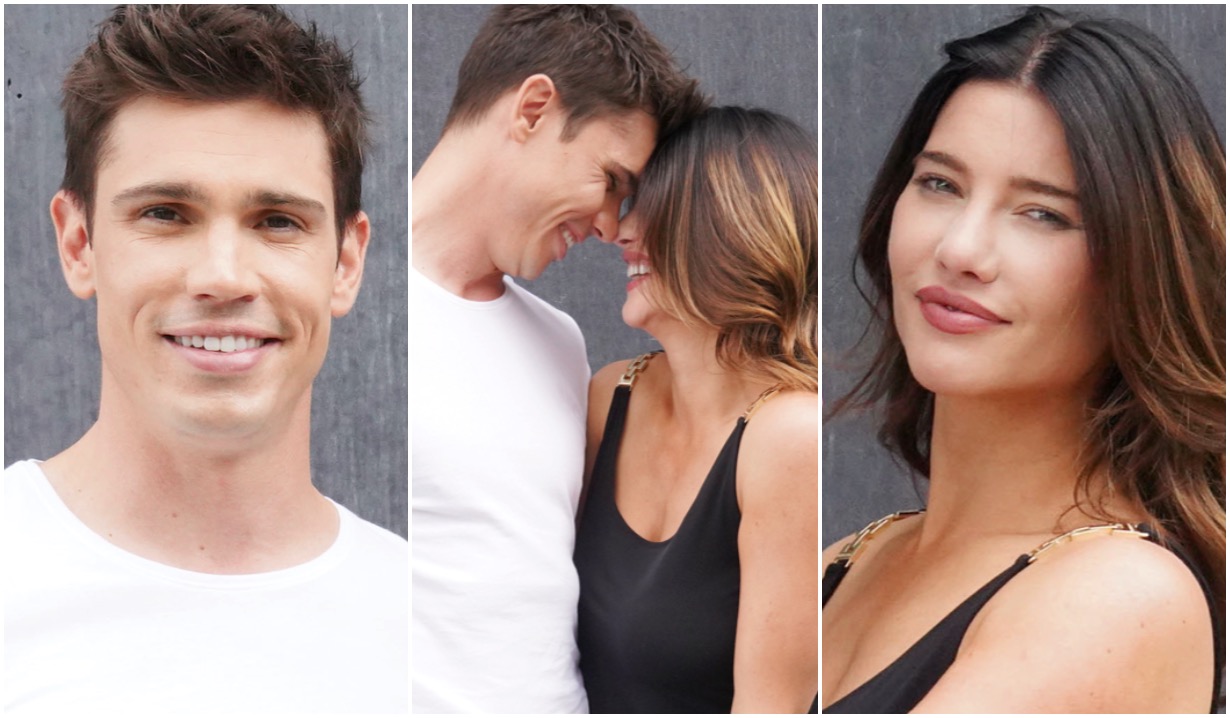 Jacqueline MacInnes Wood and Tanner Novlan are in Monte Carlo!

Bold & Beautiful’s Steffy and Finn storyline has been an absolute whirlwind since that shocking episode in which she confronted his birth mother, Sheila, in the alley behind Il Giardino about her role in escorting Brooke off the wagon — she was definitely not reformed as she claimed! The notorious psychopath, unsurprisingly, didn’t take well to being called out — or told that she would never be a part of Finn or Hayes’ lives — and pulled a gun on her daughter-in-law.

In a soapy twist, Finn took the bullet when he appeared out of nowhere, determined to protect his wife, and lay dying in the alley. Sheila, despite her recent protestations that she would have done something to help save her son had she realized there was a chance he might survive, shot Steffy when she attempted to dial 9-1-1.

More: Tanner Novlan became a dad for the second time

Bold & Beautiful fans were left stunned when it was declared that Finn had died on route to the hospital and Steffy was left in a coma. After a quick bout of amnesia that took us kicking and screaming down memory lane with ‘Steam’, the devastated brunette snapped back to the awful reality that her husband was gone.

Eventually, she remembered that Sheila was responsible and we were treated to another dramatic, if not weird, confrontation in which the she-devil ratted herself out for her various crimes. As Finn’s bio-mom was hauled off to prison, Steffy was finally forced to turn her attention to mourning her loss.

Just when we thought there couldn’t possibly be any more turns in this tale, Finn’s adoptive mom Li reappeared, behaving oddly. It wasn’t long before Bold & Beautiful viewers were astonished again — Finn was alive, on life support, tucked away in an undisclosed location! Li had spirited him out of the hospital after signing his death certificate and was trying to save him after other doctors wrote him off due to lack of brain activity. 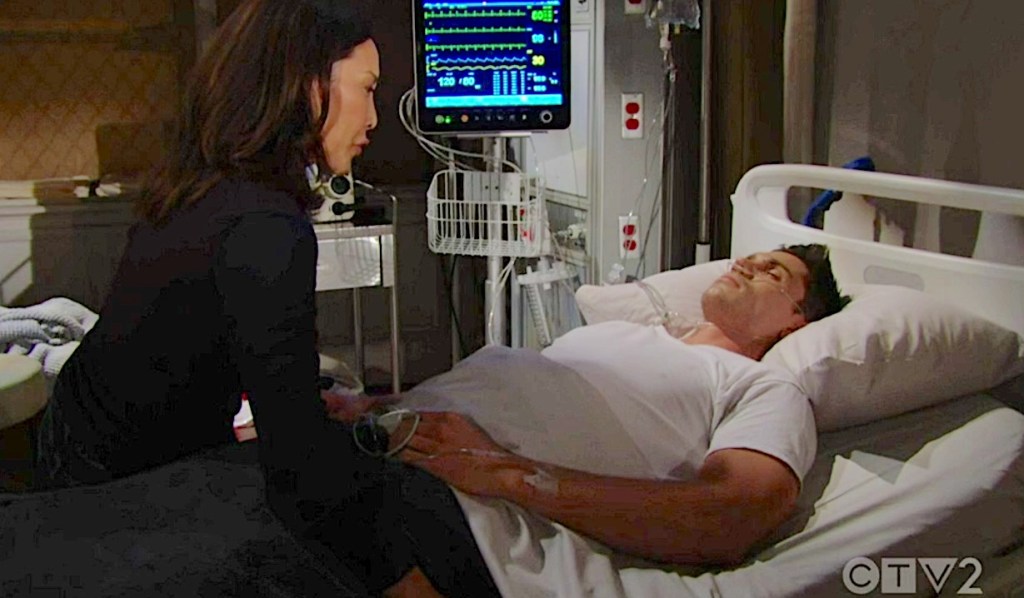 Her instincts proved to be right on, as it wasn’t long before Finn’s eyelids were twitching promisingly. Steffy, of course, was in the dark about all of this and headed overseas with the kidlets as a means of putting distance between her and the painful memories in Malibu.

All that remains to be seen is how Finn will recover to the point that he can be reunited with his wife and make their family whole again. Naturally, it will not be as simple as Li nursing him back to health, as Sheila escaped prison and is now on the scene. This means anything can happen and probably will.

But we all know ‘Sinn’ will find their way back together, and with Tanner Novlan and Jacqueline MacInnes Wood jetting overseas to represent the Bold & Beautiful at the 61st annual Festival de Television de Monte Carlo, we have to wonder if the big moment might be filmed on location. After all, in SOD’s summer preview, Brad Bell teased, a “very special, and very romantic summer” planned for Steffy and Finn. Things that make you go, “Hmm…”

See ‘Steffy’ and ‘Finn’ together again in Monte Carlo, along with other Bold & Beautiful stars, in the photo gallery below.

<p>Tanner Novlan (Finn) and Jacqueline MacInnes Wood (Steffy) were all smiles when they reunited in Monte Carlo and took part in an autograph signing together ahead of a very special celebration. All of this just weeks after <a href="https://soaps.sheknows.com/the-bold-and-the-beautiful/news/633841/bold-beautiful-tanner-novlan-baby-son-birth-jones-douglas/" target="_blank">Novlan became a father for the second time</a> and Wood brought her third baby boy into the world.</p>

<p>Here’s another shot of the twosome happily dedicating photos to <em>Bold & Beautiful</em> fans in Monte Carlo. We love their 8″ x 10″ glossies!</p>

<p>Jacqueline MacInnes Wood was looking playful — not to mention glowing — at the event in Monte Carlo, which took place just <em>one</em> <em>month</em> after she <a href="https://soaps.sheknows.com/the-bold-and-the-beautiful/news/630080/bold-beautiful-jacqueline-macinnes-wood-birth-son-brando-pregnancy-timeline-photos/" target="_blank">gave birth to her third son, Brando.</a></p>

<p>We’d like to know how Krista Allen and Thorsten Kaye are explaining some of the wacky behavior their characters Taylor and Ridge display on <em>Bold & Beautiful</em>! We have to wonder if this session yielded more questions than answers!</p>

<p>“Tridge” fans will delight in seeing their faves together in Monte Carlo. The pair made a good-looking couple as they posed for photos at the 35th anniversary celebration.</p>

<p>Novlan and Wood made a dazzling twosome at the soiree after traveling to Monte Carlo to represent the show and reunite officially for the first time after his ‘Finn’ character was seemingly killed on the soap, leaving Steffy grieving her husband.</p> 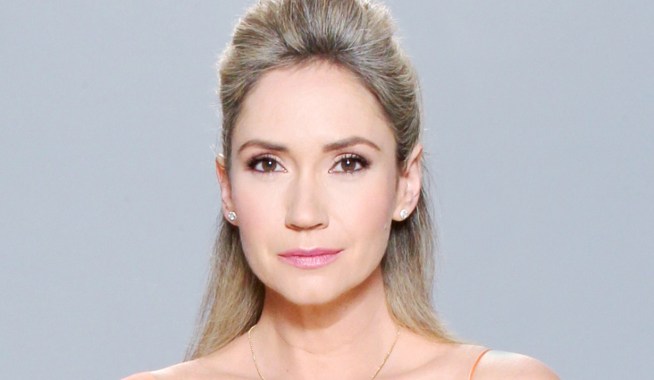 Bold & Beautiful’s Carter Just Committed to Paris and We Already Know an Annulment’s Coming: 'It Will Be the End of Their Marriage' 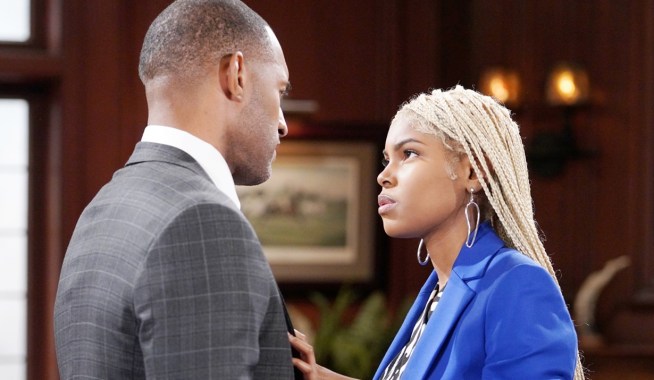