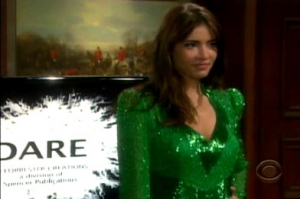 Whip's there for Sandy. (Soaps.com)

B&B Breakdown for the week of December 21!

I left for vacation before the Christmas Eve episode, so this week’s blog will only be about events through Wednesday.

Always in the Dark
Oh Thorne. He’s always the last to know what’s going on in his family’s company. His look of shock and confusion when he found out Eric was returning to the company was hilarious. And if having his office in the basement wasn’t bad enough, now he has to share it with his father. The poor man gets no respect. It was nice to see him pop up though.

The 80’s Are Back
I’m glad Katie and Bill aren’t totally buying into Eric and Ridge’s new vision for the next line and are smart enough to know their designs are God-awful. Steffy in that green sequenced number was priceless and I hope that never ever comes back in style. This story has a lot of humorous potential, as long as they keep showing us the clothes Eric and Ridge come up with. I so hope there is a fashion show for this collection. I do wonder if Eric and Ridge’s plan will backfire though and their gaudy 80’s clothes become a big hit. I would love that.

Caught in the Middle
I feel bad for Katie and how torn she is between her sisters and her husband. She's finally happy and in love, but her family hates the man she's chosen. Asking Bill to give FC back to the Forrester's just so she could spend the holidays with everyone was a bit immature though. It's not a car or a TV. It's a business and Bill is a ruthless businessman. Did she really think he would do that just because he's in love? I think not.

Breaking Out Of Her Shell
In order to help Sandy out, Nick convinced Stephanie to hire her as her assistant. It was very generous of him, but I would think Stephanie would require someone a little more confident and in the know. Regardless, I enjoyed Stephanie welcoming Sandy aboard and basically offering to be her mentor. If Sandy wants a job in fashion, having Stephanie Forrester show her the ropes is a great way to start.

Nick singing for Sandy in order to get her to come to the Christmas party was cute, but I found Whip's concern for his cousin more endearing. The welcoming smile and supportive wink he gave Sandy when she walked in the party was really sweet. I hope they explore their relationship more.

That's all I got for this week. Feel free to agree or disagree with me or touch on something I didn't mention below. I'll be back with more next week, but in the meantime I wish all of you a wonderful holiday! Don't forget to visit our B&B News Room this weekend for our Saturday Teaser Poll!