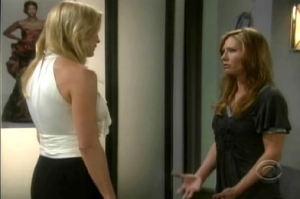 B&B Breakdown for the week of December 14.

I wasn’t too inspired by this week’s events, so it’s going to be a short rant, but here’s what stuck out for me.

Sandy
I have been enjoying Nick’s concern for Sandy and I liked Brooke’s talk with her, but now I’m worried Sandy is going to fall for Nick. Since he will be the first man she can trust since her rape, which she confirmed this week, I fear this is where the story is going. I hope they’ll surprise us by not going down that road though. We’ll see.

Word came down that Sandy is getting a brother in 2010. I’m pretty excited by this as I’d like to see more of her and Whip’s family and I really like the actor, Zach Conroy. He recently played James on Guiding Light and I thought he was very charming and charismatic, so I can’t wait for him to hit B&B as Oliver Jones.

Whip and Taylor
I'm really enjoying their flirtation, but I thought it was a little soon for him to be so serious about her being at the fashion challenge, which he won. Maybe they should go on a real date first before he says things like, "It means a lot to share this with you." She already has reservations about dating him, maybe he shouldn't come on so strong so soon. But of course, Whip was charming and cute, so I would have kissed him too.

Eric's Back
It's nice to see him return to the land of the living. I'm on the fence as to whether or not I think their plan of putting out a terrible fashion line in order to shake loose from Spencer is a good idea, but I like the gleam in his eye and Ridge's plotting as they try to get their company back. It'll be fun to watch this play out, as they put together a ghastly collection reminiscent of the 80's. I wonder if Bill and Katie will truly be snowed by this. I hope Bill is smarter than that.

Random Thoughts
Other than the above, the fashion challenge was fun, but all I really have to say about that is I liked Jackie M's collection better. I would also like to see more of Justin, but that’s old news. Maybe he and Sandy can bump into each other and he can help her heal instead of Nick. And did I miss something or have all of Stephanie's stroke symptoms gone away? Is she back to being one hundred percent; is she hiding the signs; or have we forgotten it happened at all?

So that's all I got this week. What did you think? Feel free to share your thoughts about all the happenings below.

Ex-Bold and the Beautiful Model...