Bold & Beautiful’s Finn Had Better Watch His Back Because Steffy’s All But Told Him She’s Destined to Leave! 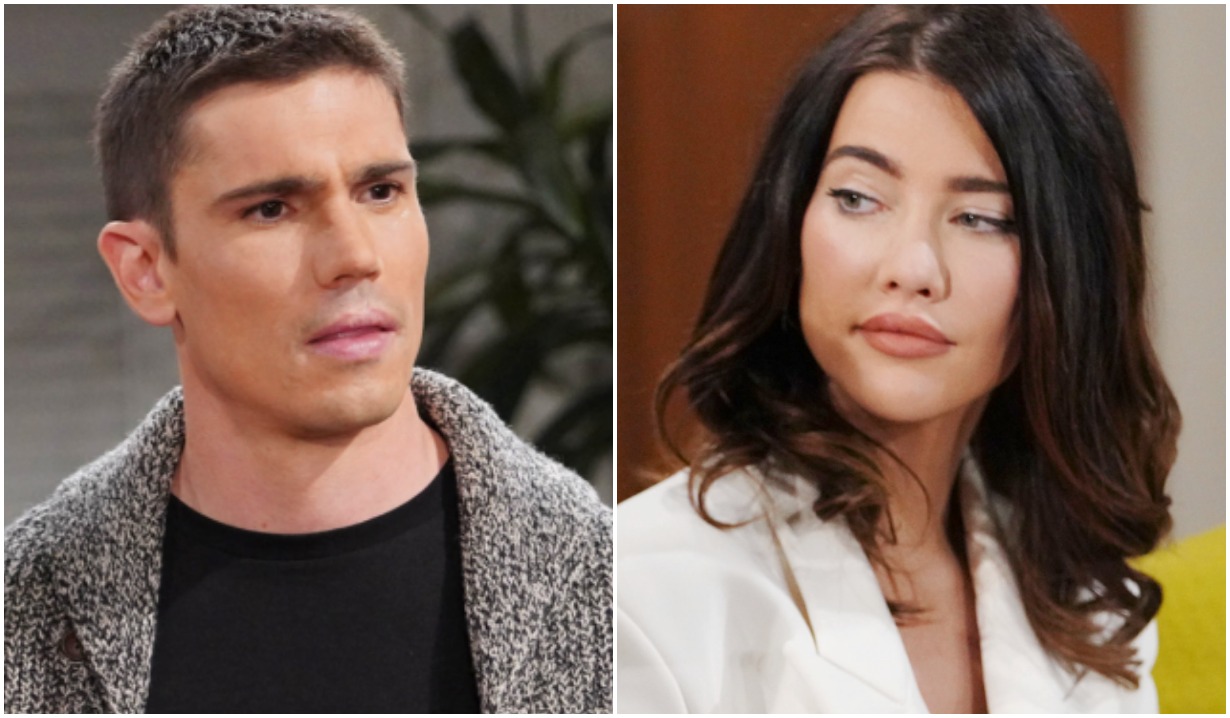 Family first? Since when?

Well, we all saw this Bold & Beautiful train wreck coming at us in slow motion, but it’s official: Taylor and Ridge have announced they’re back together! That took about 10 minutes post-kiss reveal, but who’s counting?

Steffy is, of course, thrilled, since she’s become downright obsessed with this whole idea that families need to stay together. It’s funny, though, because she didn’t seem to feel that way when she decided she didn’t need Liam or any man after Kelly was born. Heck, she was about to raise two kids on her own at one time!

Now that that’s changed, she’s all but telling Finn that she could leave him in a heartbeat! If they didn’t have a child together already, then all this “family needs to be together” drama she’s been pushing on Taylor and Ridge should have caused her to ditch Finn right away and start angling for a Liam reunion.

That’s off the table, but since she now shares children with two different men, it would be pretty easy to hold leaving Finn over his head whenever she’s unhappy with him — like, say, if he starts getting too chummy with his mother! 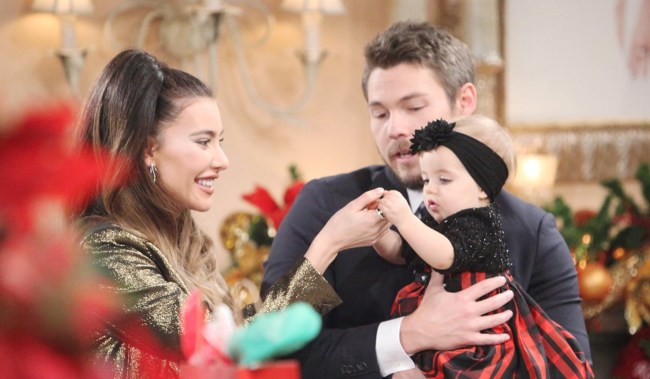 Above: “That’s right, Kelly, you’re my favorite, so you win the family reunion!”

“But we have a family,” he could say. “We have to stay together.”

“Yeah, well, I have one with Liam too,” she could respond, “and his came first. Plus, his family doesn’t have any Sheila baggage with it!”

Her whole obsession with reuniting her family is just downright bizarre and, as we’ve written about before, an almost complete reversal from the independent Steffy we thought she’d become. Either way, if we were Finn, we’d be keeping a close eye on his wife. Because if there’s one thing she’s demonstrated through all this Brooke/Ridge/Taylor drama, it’s that she’s not exactly taking the mature route when it comes to her family.

Keeping track of Steffy’s own drama can be tough, especially when it comes to her complicated relationships with Liam and Hope. Luckily, we had Scott Clifton break down his character’s tug-o-war with a photo gallery delving into the triangle that Steffy might just decide to reignite at any moment! Before you head out, click through to get a better idea of why Finn should be so nervous right now!

<p>“There was absolutely nothing special about my first episode,” says Scott Clifton of his debut as Liam. “And that’s how it was supposed to be. I had a couple of lines, but there was certainly no indication that Liam would be who he is now. He was just a random tech guy.” </p>

<p>Within a few weeks of his introduction, Liam was involved in a full-blown sex scandal. “It wasn’t his fault,” defends Clifton, “but it resulted in him sort of becoming Hope’s protector.” Not, however, until after he’d accidentally helped reveal to the world that a case of mistaken identity had led to Hope’s boyfriend, Oliver, sleeping with her mom, Brooke. “Hey, it happens,” laughs Clifton. “Especially to Brooke, apparently!” </p>

<p>One thing Clifton remembers about his early days? Being slapped by Susan Flannery’s Stephanie. While it took some characters years to earn that distinction, Liam managed it during his portrayer’s first week! “Before we taped the scene, I told Susan that she could feel free to slap me for real.” She did… so hard that she stunned him into silence! “She really let me have it, so much so that I just sort of stood there. I knew I was ruining the scene, because I froze… and then bless her heart, she slapped me again, and that brought me right back into the moment!” </p>

<p>During his first few weeks on the show, Liam wasn’t played as a romantic lead. It would soon turn out that he was a (young) man on a mission, determined to find the father who didn’t even know he existed. “The story was Bill discovering he has a son,” recalls Clifton. “That’s a big deal for a character like Bill, because he’s exactly the kind of guy you don’t think would be a good father.” </p>

<p>It wasn’t until nearly a year into Clifton’s run that executive producer/headwriter Bradley Bell explained his true intention for Liam. “He said that for many years, it was Brooke/Ridge/Taylor,” he remembers. “He said, ‘I need that trio for a new generation.'” Interestingly, Bell added that his vision included a bit of a twist. “He said that in this triangle, Hope is Taylor and Steffy is Brooke.” </p>

<p>“Hope was always written as sort of the good girl,” says Clifton, here with the character’s previous portrayer, Kim Matula, and Jacqueline MacInnes Wood (Steffy). “The weird thing is that according to the narrative, Steffy was the bad girl. But in reality, Steffy was almost conservative. I mean, who did she sleep with? Nobody! But from a storytelling point of view, she was thought of as, for lack of a better term, the vixen.” </p>

<p>“To me,” says Clifton, “Hope (both Matula and Annika Noelle here) represents everything Liam ever thought he wanted. She represents purity and chasteness, goodness and even a sort of righteousness. That’s what he finds himself attracted to in theory. I think he’s always been in love with the <em>idea</em> of Hope and what she represents to him.” As for Steffy… </p>

<p>“Steffy is the opposite of Hope,” muses Clifton. “Steffy is what I think he needed at times in his life even if he didn’t know it at the time. She’s the one who sort of challenged him, made him uncomfortable and forced him to grow. But never was she the sort of idyllic fantasy represented by Hope.” </p>

<p>Proving himself a true love-’em-and-leave-’em kinda guy, Bill later found out that Liam wasn’t the only son he’d unwittingly fathered upon the arrival of Darin Brooks’ Wyatt. “The No. 1 comment I get from fans is how much they love the relationship between the three of us,” admits Clifton. “It’s the most natural thing on the show, and we all love our scenes together.” </p>

<p>Of course, Steffy and Hope aren’t the only women who’ve caught Liam’s eye over the years. “Ivy was the one who got away,” sighs Clifton of Ashleigh Brewer’s alter ego. “Ivy was awesome! I mean, first of all, she was so hot, like Elizabeth Taylor reincarnated. And you know how people say someone is lovely inside and out? That’s Ashleigh. She’s nice and kind-hearted and thoughtful and interesting. I had a complete blast working with her!” </p>

<p>Although it was clear that Ashlyn Pearce’s Aly had a thing for older guy Liam, that storyline went nowhere fast… and Clifton admits it’s likely because of him. “I’d done a story on One Life to Live in which I played a teacher with a younger student who had soft of a Fatal Attraction-esque crush on him. This had that same sort of older guy/younger girl feeling to it, and it was uncomfortable. So instead, I played Liam as, ‘Oh, gee, maybe if I was younger… ’ and the writers kind of quickly moved away from it.” </p>

<p>It’s easy to forget, but yes, Liam slept with Quinn. Sure, he had amnesia and believed himself to be Adam and her to be his wife, Eve. “I’ve said it before, but that was my favorite storyline that I’ve ever done on the show. Just Rena Sofer and I, on one set, for months. And what made it such an amazing experience is that Rena and I are the exact opposite type of actor. She’s very disciplined and structured, memorizes her lines a week in advance. I’m pure chaos compared to her. Yet somehow, we clicked. My scenes with her were some of the most gratifying that I’ve ever done.” </p>

<p>Being from the proverbial wrong side of the tracks, Amber hoped to snag a rich hubby by making Liam think he’d fathered her baby. “The story didn’t last very long,” says Clifton, “but I really enjoyed working with Adrienne Frantz.” The story also, he said, “helped establish just how far Bill would go to protect his family. Because remember, he was ready to throw her off a cliff!” </p>

<p>Fans will remember that when the legendary Bob Barker visited <em>Bold & Beautiful, </em>the former <em>Price Is Right </em>host sucker-punched Wyatt. But what Clifton remembers is “how deeply thoughtful, sharp, ethical and philosophical he is.” </p>

<p>Although Liam is usually at the center of a whole lotta drama, Clifton admits he’d love the opportunity to do more humorous material. “We have some really, really funny people in our cast,” he reveals, including Matthew Atkinson (Thomas) and Noelle. “You don’t really get to see much of that on the screen, but trust me, we have a lot of fun behind the scenes.” </p>

<p>Just like real brothers, Clifton and Brooks have shared numerous life experiences over the years. “We both got married, we’re both dads,” says Clifton, with wife Nicole, TV bro Brooks and <em>his</em> real-life wife Kelly Kruger (ex-Eva). “These are experiences which change you, so it’s good to have someone you can talk to who is going through them, too.”</p>

<p>“I’m lucky in that we’re a fairly small cast, so I’ve gotten the chance to at least share scenes with everybody,” says Clifton. “But there are people I’d love to work with more. There’s a difference between being in scenes together and actually being in a storyline, where you get to do more intensive work with them. For example, Thorsten Kaye (Ridge) is the sort of actor I aspire to be. And when I work with Katherine Kelly Lang, it’s usually just Liam and Brooke talking about Hope. We’ve never gotten to do anything meatier. Same with John McCook (Eric).”</p>

<p>Even after all this time, Clifton says, “I love my job. I love the people I work with and that I am fortunate enough that I get to act, every single day, for a living.” But if he’s honest, this isn’t his dream gig. “Ever since I was a kid, what I really wanted wasn’t to be on soaps or to be a movie star. I wanted to be a voiceover actor. It’s limitless… you can be absolutely anyone and, if you’re lucky, you can do it in your pajamas.” </p>

<p>As to what the future holds, Clifton thinks that Liam might finally be done waffling between Steffy and Hope… at least for now. “Steffy has Finn, and she’s moved on,” he says. “And even the last few times that Liam and Steffy have wound up sleeping together, it’s been written as if it was a mistake, not a sign that they were heading for a reunion. So at least for now, it seems as if Hope has won. Or lost, depending on how you feel about Liam!” </p> 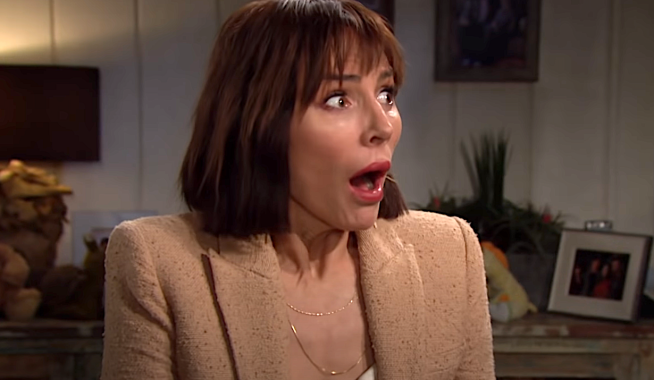 As Bold & Beautiful’s Taylor Falls Back Into a Bad, Bad, So *Very* Bad Old Habit, We Have Terrible News for Her

Bold & Beautiful Preview: Ridge Makes a Stunning Move After Taylor Asks if He Has Any Regrets About Last Night 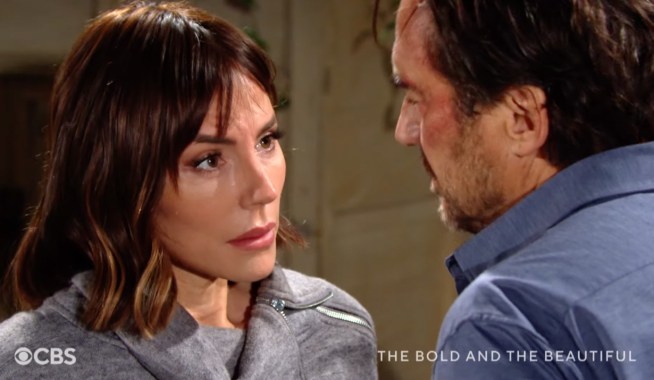