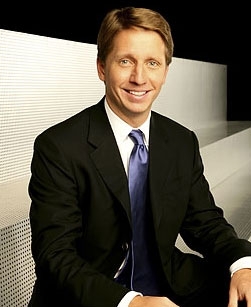 In the wake of the cancellation of As the World Turns, TV Guide Magazine talked to Brad Bell, B&B head writer and executive producer, about his show’s future.

Regarding CBS chairman Les Moonves’ statement about it being the end of the ‘client-owned’ soap, Bell stated, “I believe that he was specifically referring to the P&G shows when he said that. B&B just recently signed a two-year deal with CBS in October, so we have legs with the network. Y&R signed a similar deal around the same time.”

On whether or not he is concerned about being part of a ‘two-soap lineup’ on CBS, Bell said, “I’m not concerned. Days of Our Lives is standing alone on NBC and their recent numbers have been pretty good, so I think the two soaps can hold their own on CBS.”

When asked what he can do, that he isn’t already, to produce a more economical show, Bell responded, “It might mean writing more scenes with fewer people—two-person scenes require much less time to stage and shoot—and we might be able to eliminate some of the sets. We can also expand our ways of doing the show. We shot much of Betty White’s final four-episode arc very inexpensively and on location at the beach, and it all came together wonderfully. Those episodes are right up there with the ones I’m most proud of. And let’s be honest, we still pay for certain things that are a little bit luxurious. We may need to do without them.”

Ending the interview, he declared, “It’s not over yet for the Bell family. We plan to be in this business for many years to come.”

Are you feeling as positive about B&B‘s future as Brad Bell? Share your thoughts with Soaps.com below, and if you missed our past interview with Brad, check out Candid Interview With Bold and The Beautiful’s Brad Bell!

The Bold and the Beautiful Holiday...

Pumpkin Shannon Opens Up About Rocky Relationship Status With Husband Josh After Announcing Baby No. 2

Newcomer Yasmin Finney To Star In Billy Porter’s Directorial Debut Feature ‘What If?’ From Orion Pictures

The Resident Video: Conrad's New Patient Has a Surprising Link to Dr. Bell