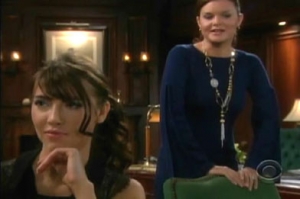 Whip's charm gets to Taylor. (Soaps.com)

B&B Breakdown for the week of December 7.

This week Katie earned her title, Nick tried to figure Sandy out and Taylor got matched up with Whip.

Katie Turns the Tables
I so enjoyed Katie figuring out what Steffy was doing and that she didn’t let her get away with it. I loved that as it was revealed to the audience, via Steffy’s smug smile, Katie laid out her correct assumption that Steffy was just trying to get back at her for taking over Forrester, by taking something away from her: Bill. It was truly a surprise to me, as I didn’t see that as being Steffy’s motivation, but she later admitted to Thomas that Katie was pretty much right. Whether it was a subconscious decision on her part or not (I’m a little hazy on that), Steffy being underhanded and manipulative is so much more interesting than her just being a lost, weepy girl who made the wrong choice with men yet again. I thought it was funny that Thomas told Steffy she wasn’t talking healthy when she described her hatred for Katie. If anyone should know unhealthy, it’s him.

It’s so great that Katie was smart enough and cutthroat enough to sack Steffy for her sabotage. She earned her place as CEO in that scene with me, but what’s up with Bill? Why did he seem so concerned about Katie firing Steffy? He’s a ruthless businessman, not a compassionate, concerned boss. He should support this action no matter what.

The Whipster
I truly loved Whip this week. Rick Hearst is such a fun actor to watch and he’s finally getting a chance to shine on B&B. We’ve already seen some lighthearted scenes with him at Jackie M and his potential at being a romantic interest with Jackie, but that obviously didn’t go anywhere as she loves Owen, but now we get to see him as the concerned and protective cousin with Sandy, as well as the fun and flirty leading man he can be with Taylor. His scenes with Taylor so far have even made her interesting for me, as I’m looking forward to seeing where these two will go. Let’s just hope we do get to see more of them and they aren’t backburnered already next week, as B&B has the tendency to do.

On a side note, Taylor must not have much of a practice if Whip got a same day appointment with her.

The Plot Thickens
I really can't believe how much I am liking the surrogacy plotline. I'm usually pretty bored with this type of story, but Sandy is a pretty compelling character, that we have yet to truly figure out and I'm really enjoying Jack Wagner (Nick) and Sarah Brown's (Sandy) performances. You can see Nick trying to gently handle Sandy and figure her out, while keeping his devotion to Bridget and often gruff exterior in tact. As for Sandy, her fear of Nick, but need to connect with Bridget is evident, making her all the more interesting. So far, I'm with Nick and feel that she isn't a threat to them, but just a wounded soul. I just hope this doesn't turn out to be like many other surrogacy storylines where the surrogate becomes obsessed with the baby and/or father. So far it's vastly different in that Nick already knows something is off. I hope it continues to surprise me and take a different path. We have about nine months for it to unfold, so we'll see how it goes.

The Everyday
I enjoy the quiet scenes we are occassionally treated to between Brooke and Ridge when they are just hanging out at home, not having sex or fighting. So I liked Friday's episode when they discussed Christmas and Sandy, but I had to laugh when Brooke looked at the sweater (coat?) Ridge bought Steffy from Macy's. Maybe I'm wrong, but I just can't imagine a designer of his caliber shopping for his daughter there.

That’s it for me this week. What did you think of all the B&B happenings? Feel free to agree or disagree with me or comment on something I didn’t touch on below.