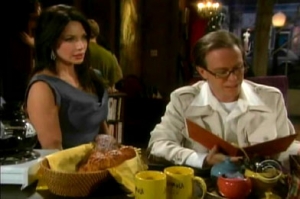 Something's not quite right. (Soaps.com)

B&B Breakdown for the week of November 30!

This week led to a couple of reveals for a couple of characters and a nice surprise for this writer.

Pleasantly Surprised
I will start this week off by admitting I was wrong about Taylor. In last week’s blog I thought her date with a man from a time in her life she didn’t want to remember was going to be the beginning of a serious story and I felt it was too rushed. However, as I’ve already stated, I was wrong. Instead of immediately launching into a story about her past, we got a lighthearted scene with her date who turned out to be Carl, the lab tech who was involved in the egg switch with Brooke. Even though I think Taylor would be a little more traumatized by having to face that awful chapter in her life again, the scene itself really struck the right chord, as it wasn’t too over the top and corny, but instead it was just light and funny. I found myself actually liking Taylor as she fairly, calmly and tactfully tried to turn the eager and clueless Carl down and eventually slunk out of the coffeehouse.

A Rick Sighting
It was great to see they dusted Rick off again this week and I was happy to learn he hasn’t been tomcatting around, but instead, he’s been donating his time to charities and building homes for the less fortunate. His talk with Steffy was kind of sweet as he told her he missed her and invited her to the Laker game. I could get behind this Rick hooking up with Steffy. Did anyone else laugh though when Steffy told Rick what she did was worse than anything he has done? Uh, I don’t think so. Yeah, she shouldn’t have kissed her boss/step aunt’s fiancé, but I don’t think it really compares to the vindictive things he did to Ridge.

Unhinged
Clearly Sandy has some issues she hasn't dealt with. And clearly it has something to do with a fashion shoot or movie premiere or something with a lot of camera flashes going off. Whip keeps referencing how she was supposed to work with him at Forrester, but then she took off. Could something have happened to her at a fashion shoot that she wasn't able to cope with? Maybe a male model or photographer abused her in some way? That's my guess for now, especially after Nick pointed out she has issues with all men, not just with him.

I'm glad Nick has figured out a couple of things about Sandy, namely her name is really Agnes and she eats like crap. It's nice to see him put together some of the pieces, like her skittishness and realize something is wrong with her. It remains to be seen if he tells Bridget, but at least someone is smart enough to find out what's really going on, or at least a little bit of it.

Let it Go
I appreciate Brooke's concern for her sister, but good Lord, as Bill kept telling her: let it go already! It was a full week of, 'What aren't you telling me', 'What really happened', 'Why are you betraying my sister' and so on. She finally decided to tell Katie, but then changed her mind. Hilariously, so did Bill and they flip flopped on their positions regarding the issue. I find it interesting that we now learn of a second kiss between Steffy and Bill that occurred at the cabin, leading me to wonder if he really is telling the truth and that's all they did. Could more have happened? Chime in with your opinion on our Bill and Steffy poll.

That's it for me this week. What did you think? Share your thoughts on the week's events below!