Bold & Beautiful’s Kimberlin Brown Is Likely to Make ‘Auntie’ Cry Uncle as She Takes a Stab at Making Lawrence Saint-Victor Even Hunkier — Wait, Is That Even *Possible*? 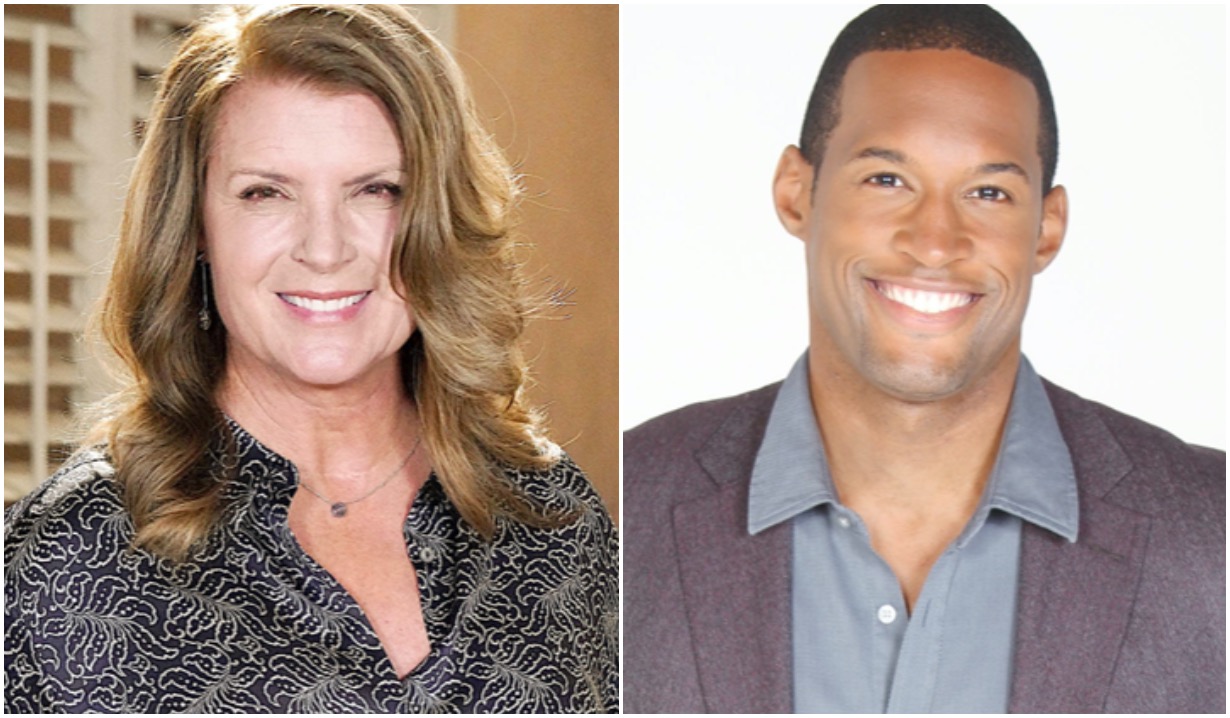 Get ready fans because you are about to learn — drum roll, please — how to apply proper body makeup “on some of daytime’s hottest hotties!” Yes, you heard correctly, and The Bold and the Beautiful’s Kimberlin Brown (Sheila) is going to be the one to teach you.

The actress shared a post on Instagram, holding a makeup brush, and dedicated the video to “Auntie” before asking one of the CBS soap’s artists, Chris, to “show me what I need to do.” Ask and you shall receive! Chris took the brush from Brown and the camera then panned to a very buff chest that Bold & Beautiful fans will be sure to recognize, given his recent steamy onscreen scenes. Yep, that’s Lawrence Saint-Victor (Carter) as the model.

As Chris explained the process, which Brown captioned in the video, “Makeup tip number one… How to make that hunk look even hunky’er with contouring,” Saint-Victor couldn’t contain his smile as Brown followed Chris’ instructions by tracing her finger along his chest.

“Auntie, are you seeing this? I’m just saying… Sheila has just laid hands on your boy,” Brown teased then began moving the brush from side-to-side on his chest, down his stomach and along his abs. Saint-Victor then looked into the camera and giggled that the woman Brown was talking to “is probably like, leave my nephew alone.” Wrapping up the session, Brown insisted, “Sheila is not a bad person. I keep trying to tell people that.”

It’s no secret that many would disagree with Brown’s description of Sheila, and given that the character was recently caught holding Finn and Steffy’s child, grandson or not, it’s only a matter of time before the soap has a murder mystery on its hands — and we invite you to view a list of suspects in our photo gallery below.

<p><strong>Why He Would Kill Sheila:</strong> Not only to keep the repeat offender from having any influence whatsoever over their goodhearted son, Finn, but to keep her from revealing to Li that she unwittingly adopted her own husband’s illegitimate child. If that one-two punch isn’t a motive for murder, we don’t know what would be. <strong>Why He Wouldn’t Kill Sheila:</strong> Despite the clear and present danger that she represents, foolishly trusting Finn might never forgive his dad for murdering Mommie Dearest.</p>

<p><strong>Why She Would Kill Sheila:</strong> To protect son Hayes from the walking nightmare that is his Maw Maw, obviously. On top of that, the newborn’s mom could consider a switchblade to Sheila’s heart — or empty chest cavity, anyway — payback for her “murder” of Steffy’s mother, Taylor. <strong>Why She Wouldn’t Kill Sheila:</strong> Having seen how close ex-husband Liam recently came to being separated from his family, Steffy would probably think twice before committing a crime that could get her sent up the river and away from her kids.</p>

<p><strong>Why He Would Kill Sheila:</strong> We could well imagine the Forrester family’s patriarch feeling so guilty for having brought the sinister scheme weaver into their lives in the first place that he might take it upon himself to remove her from the equation — permanently. <strong>Why He Wouldn’t Kill Sheila:</strong> Eric is basically a good guy. Yeah, he thinks with his zipper a bit too much, but down deep, he’s a decent fella. Albeit the kind who can get so mad that he might try to run down the object of his rage (as he did Deacon Sharpe after he broadcast his deflowering of Eric’s daughter, Bridget). On second thought, maybe he really <em>would</em> take a shot at exterminating Sheila!</p>

<p><strong>Why She Would Kill Sheila:</strong> Like Jack, to prevent the maniac from warping Finn’s mind and turning him into a chip off the ol’ block. Plus, what if she secretly <em>knows</em> Jack is Finn’s biodad? She might off Sheila to prevent “their” son from being disillusioned about the man who raised him. <strong>Why She Wouldn’t Kill Sheila:</strong> Nah, murder just isn’t Li’s style. Finn’s adoptive mother would more likely reason with him — and, in most genteel fashion, paint Sheila into a corner she’d have to leave L.A. to get herself back out of.</p>

<p><strong>Why He Would Kill Sheila:</strong> Having seen firsthand the kind of hell she wreaks — <em>and</em> on more than one occasion — Steffy’s father might put the she-demon six feet under to keep her from performing the encore for which none of his family asked. <strong>Why He Wouldn’t Kill Sheila:</strong> Ridge has too much to lose, from his hard-won second chance with Brooke to his future doting on his grandkids. He’d more likely see if he could pay off Deputy Chief Baker with hot dogs to plant evidence and get Sheila sent back to the slammer.</p>

<p><strong>Why She Would Kill Sheila:</strong> For one thing, it would be a terrific plot twist to have Sheila’s long-lost daughter with James Warwick sneak back into town and keep Mom from adding to her litany of sins. And it would make sense, too, seeing as the last time Mary was on the canvas, she read Sheila for filth for trying to fill her mind with the sorta malevolent nonsense that’s made the supervillain persona non grata on not one but two soaps. <strong>Why She Wouldn’t Kill Sheila:</strong> Because committing a murder would make Mary the last thing she ever wanted to be — just like her mother.</p>

<p><strong>Why She Would Kill Sheila:</strong> Hey, turnabout is fair play — and the unhinged harpy <em>did</em> once “murder” Taylor. Plus, the shrink already has a history of taking aim in defense of her daughter. Remember, she opened fire on Bill Spencer after he used Steffy’s vulnerable state to get her into bed, in so doing putting her marriage to Liam on life support. <strong>Why She Wouldn’t Kill Sheila:</strong> Um… Honestly, we can scarcely think of one, especially considering that Taylor hasn’t always seemed like she’s been shuffling a full deck in recent years. Word of advice, though: If you’re gonna do it, Taylor, try <em>silver</em> bullets, not gold.</p>

<p><strong>Why He Would Kill Sheila:</strong> Sure, right now, Sheila’s son is putty in her hands. But what if he were to suddenly wise up and realize that everybody is telling him how evil and crazy she is because, well, she’s evil and crazy? A sense of shame at his stupidity could drive Finn to make amends by sending the (Worst) Mother of Year to an early grave. (Pictured is a preview of the expression he might wear when having this earth-shattering revelation.) <strong>Why He Wouldn’t Kill Sheila:</strong> Finn just doesn’t have it in him. If he wasn’t the one to stick “Poor Dead” in front of Poor Dead Vinny’s name, he’s not going to be rubbing out his own mother, vile as she may be.</p>

<p><strong>Why She Would Kill Sheila:</strong> To once and for all get a good night’s sleep. For crying out loud, the <em>Young & Restless</em> heroine has been stalked and terrorized on not one but two shows by Sheila, and repeatedly thought that her tormenter had been sent back from whence she came — hell — only to discover that rumors of her death had been greatly exaggerated. <strong>Why She Wouldn’t Kill Sheila:</strong> For the moment, at least, Sheila seems preoccupied with the Finnegans and the Forresters. So Lauren might not want to draw attention back to herself, should an attempt on Sheila’s life not succeed.</p>

<p><strong>Why He Would Kill Sheila:</strong> That it would thrill fans of <em>The Young and the Restless</em> would be a good enough reason. In addition, though, Paul, as well as anyone, knows what Sheila is capable of. He’s seen what she’s put his ex Lauren through. And if he thought that he could discreetly pop into and out of L.A. to ensure that Sheila never does that to anyone else, Genoa City’s top cop might consider it the ultimate good deed. <strong>Why He Wouldn’t Kill Sheila:</strong> It might be awfully tricky for him to justify to straight-arrow wife Christine.</p>

R. Kelly’s Kids: Everything To Know About His 3 Children & Their Relationship With Their Dad