How much fun would it be for Carter and Quinn to carry on a soapy secret affair?

Is there anyone among us who isn’t loving the totally unexpected twist of Quinn Forrester falling into bed with Carter Walton? There are so many reasons why this shouldn’t have worked… and yet it’s one of the best twists in possibly years on the show. So where do they go from here? We have a suggestion…

Storylines tend to go either too fast or too slow on Bold & Beautiful, but we’re hoping this one hits in ‘just right’ territory. Which means we don’t want anyone else to find out about Carter and Quinn… at least not yet.

With Shauna making a pitch to Eric on Quinn’s behalf, and his admission that he still loves his wife, there’s every chance they could make their way back together. Meanwhile, Zoe’s clearly not giving up on Carter, so he might as well just give in. That girl is relentless!

But wouldn’t it be fun if the draw between Carter and Quinn repeatedly proves to be just too much for them to resist even as they strive to do the right thing? The tension and stolen looks across the office at work, the near-misses of almost getting caught… 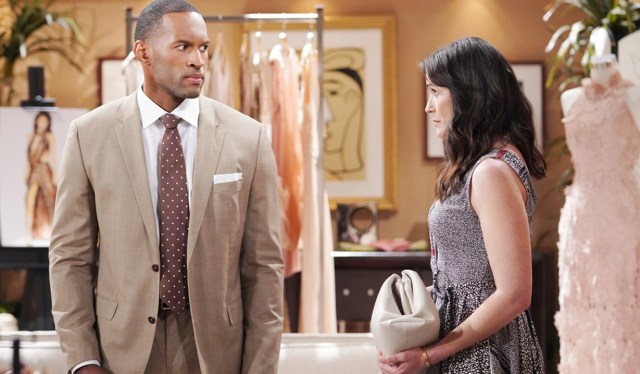 Oh the delicious tension in the air…

Sex and scandal have been soap staples for decades but it’s rare to see a full-on, torrid love affair carry on at length nowadays. There might be a one-night stand in a moment of weakness, or even just a stolen kiss, as is often the case on Bold & Beautiful, but it ends there when the transgression is discovered or confessed. Katie and Wyatt were so much fun to watch in part because it was their little secret. When it comes to ‘Quarter’ we want an old-school affair.

Bold & Beautiful spoilers hint that Zoe will stumble upon some suspicious goings-on when she tries to surprise Carter at his loft, but we’re truly hoping she doesn’t find out so soon that it’s her new pal, Quinn, he’s trysting with — draw it out and have fun with it!

It would also be interesting to see the unlikely pair fall in love despite themselves, but there’s plenty of time for that. For now, we’d like to watch Quinn and Carter fight their attraction (and lose, repeatedly) while they simultaneously grapple with their issues with their significant others. So soapy!

More: Who should discover Carter and Quinn’s affair?

Sure the fallout will be fantastic — everyone will be shocked at straight-laced Carter’s involvement with Eric’s wife; it will affect his friendship with Ridge, and possibly even his job. And Zoe will be stunned to find out exactly how well Quinn was “taking care of Carter” on all those trips to the loft, but we’re hoping for some extended fun along the way.

However it plays out, kudos to Bold & Beautiful for delighting the audience with a truly unforeseen twist that has injected soapy sex and scandal back into their storylines.

Would you like to see Carter and Quinn’s love affair continue in secret? Share your take with us in the comment section, but first, take a moment to celebrate mom’s day with photos of soaps stars and their real-life mothers in the gallery below.

The Bold and the Beautiful's Heather...

The Bold and the Beautiful's Scott...