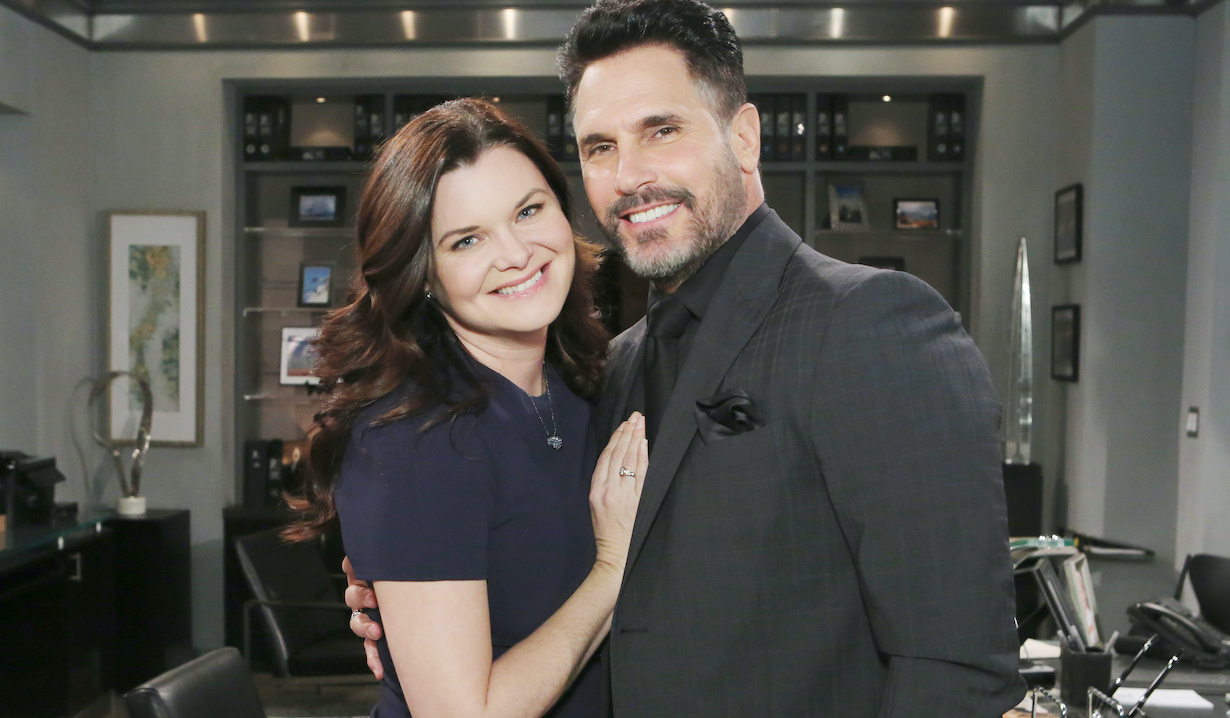 Granted, there are a whole lotta reasons that she absolutely, positively shouldn’t reunite with her ex.

You’re killin’ us, The Bold and the Beautiful. In the CBS soap’s January 26 episode, Bill made another play for his estranged wife, Katie. “I miss everything about you,” he told her. “I miss the way you surprise me on an ordinary day” and “the way you fit in my arms… I miss being at home with you and Will.

“I know I was thoughtless and selfish and hurt you,” he added, “and I’m so sorry.”

As apologies go, it was a pretty compelling one, right? Especially as played by the wonderful Don Diamont, who could sell a tanning bed to a snowman. You could really see in Bill’s eyes that he truly believed every word that he said. And you could see in Katie’s eyes that she truly wanted to believe every word. Oh, and there’s one other thing.

No way in hell should Katie take Bill back. We’ve written before about how badly we want Diamont and Heather Tom to get more screen time — and we still do want that, desperately — but argh! Not this way. 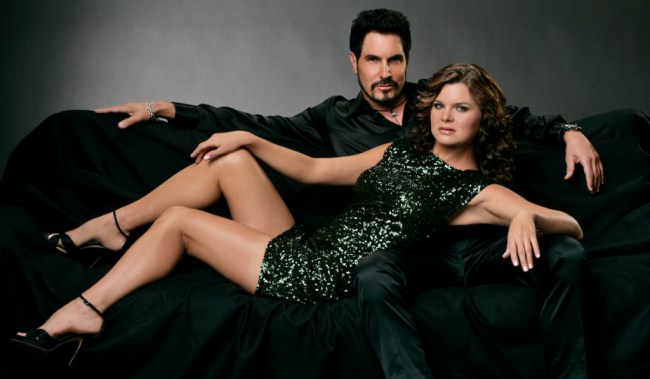 OK, Katie. We’ll grant you Bill does seem like an expert couch snuggler.

For starters, there are the obvious, written in bold, capital letters reasons that the Spencers shouldn’t give it the old college try again. Back when Bill floated a big, fat lie to keep son Liam and Steffy together, the conniver locked his wife in the tower room to keep her from revealing the truth.

Locked her in a tower like he was a freakin’ Disney-movie villain!

More: All the B&B/Y&R crossovers [VIDEO]

Then there was the time that Katie was suffering from postpartum depression, and in her whacked-out state, pushed Bill to hook up with her sister, Brooke. Rather than wait for the new mother to regain her equilibrium, Bill actually did hook up with his sister-in-law.

Come on! We’ve been less committed to slices of pizza that we were about to eat than he was to Katie! And we’ve waited longer for those slices to be ready for us!

We thought that Katie had finally washed her hands of Bill when she got involved with Ridge — no portrait of fidelity himself — but no, she remarried the philanderer in 2016, only to realize that “once bitten, twice shy” was something that wasn’t a punishment but a recommendation. Bill could no more stay away from Brooke than we can leftover pizza, and time and time again, the in-laws’ lips found themselves doing more than talking.

See? Look at this (below). They aren’t just close talkers. And with these two, that could be a photo from last year… or next year! 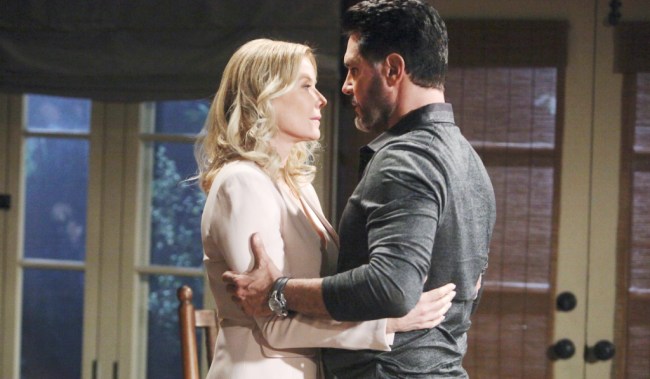 “What if we just went ahead and imagined there was mistletoe above us?”

As if those weren’t enough reasons that The Bold and the Beautiful should under no circumstances allow Katie to succumb once again to Bill’s charms, there’s one that can’t be addressed by the characters: What kind of message would that send to the audience?

Think about it. Were Katie to say “bygones” and take Bill back, the show would be, in essence, telling viewers, “It’s OK if someone treats you like [bleep] as long as they say they’re super-duper sorry afterwards. It’s no biggie if they let you know over and over again that you’re at best a runner-up. It doesn’t matter how hard you’ve fought to grow and respect yourself. You should always just take whatever emotional abuse gets thrown at you, and smile for countless wedding portraits while you’re doing so.”

For us, that’s a major no. Bill has done nothing, zilch, nada to earn Katie’s trust back. He’s made no effort to improve himself or make himself worthy. Yeah, he made a pretty speech to her, but ya know what pretty speeches are made of? Hot air. Actions speak louder than words, and Bill’s have said a zillion times over that he will always hurt Katie.

Thankfully, the show allowed her to stand up for herself. She just kept forgiving him, she noted, and he just kept breaking her heart. “I deserve better than that,” she said. “I deserve a man who loves me and only me, who’s true to me, who keeps his commitments. I deserve a man, maybe more importantly, who sets an example for our son.”

More: Does B&B want us to dislike Zoe or what?

Amen to that, Katie — all of that. Unfortunately, we suspect that just like every time before, she’s going to cave and recast herself in the role of Bill’s doormat. She might as well have just agreed to take him back when Wyatt pointed out that “you have a calming effect on this rhinoceros here… You make [my father] nicer, so you should stay forever… if you want.” 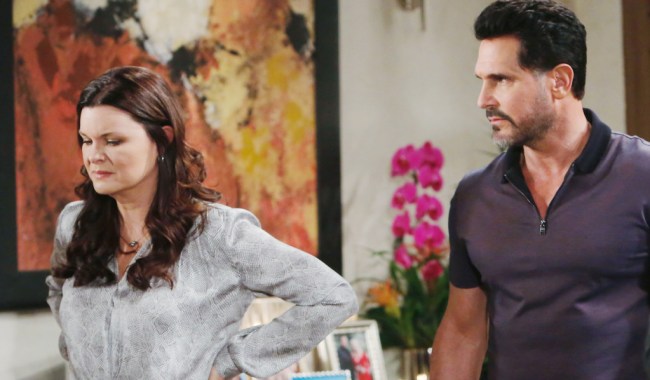 That’s it, Katie. Turn your back and start walking. Why aren’t you walking? Um, Katie?

What do you think, Bold & Beautiful fans? Do you want to see Bill and Katie get back together? Or did you, too, do a spit take when he had the audacity to say that she underestimated his commitment? Hit the comments with your thoughts, and while you’re here, check out the below photo gallery that revisits olden days, back when we still thought Bill and Katie were a viable match. 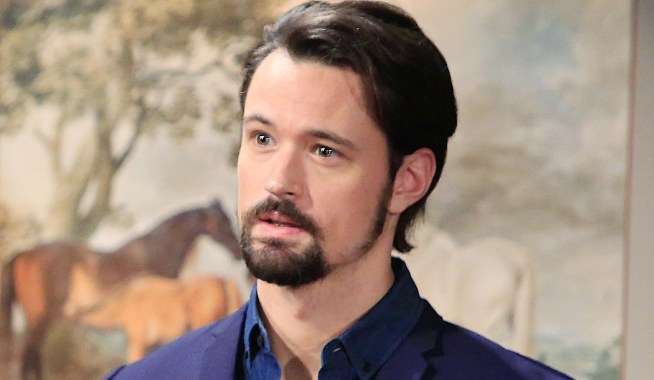 Did Bold & Beautiful’s Thomas Undergo a Personality Transplant During Surgery — or Is He About to Pull Off His Greatest Manipulation Yet? 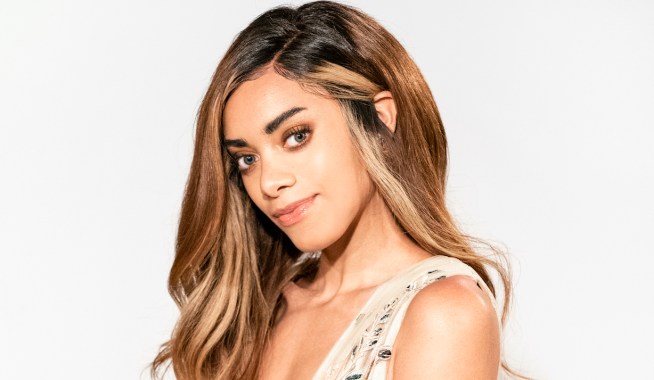