Five Reasons We Can’t Wait to See Bold & Beautiful’s Liam and Finn Battle — Plus, How *That* Picture May Finally Come Down Off the Wall 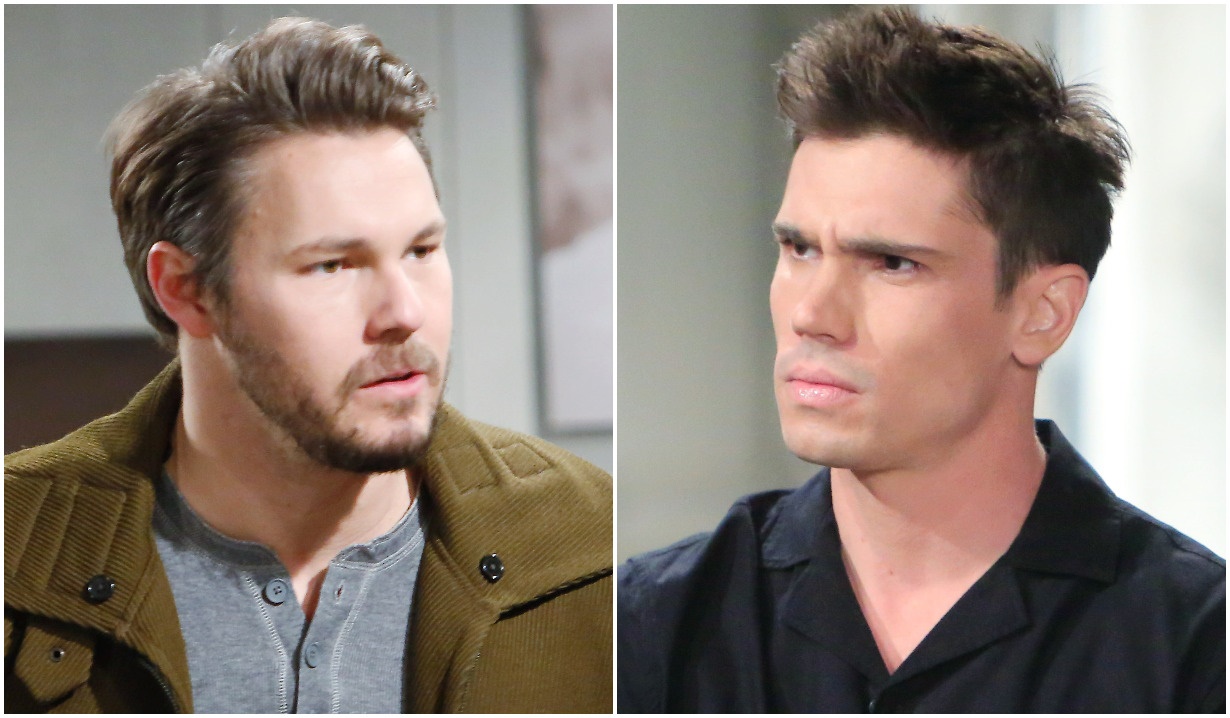 Are we about to see male mannequins flying through the air on Bold & Beautiful?

We’ve seen Wyatt tell Liam off, but they’re brothers so it’s really more chastising him and then moving on. It’s been super satisfying to see Thomas call out Liam on his waffling between Hope and Steffy, but Thomas has too many transgressions of his own, so it’s too easy for Liam to brush him off. Finn, on the other hand, could be the new rival for Liam we’ve all been waiting for — one who is in the perfect position to dole out a reality check.

Getting Read the Riot Act

After so many years of the dreaded triangle, wreaking havoc on Steffy and Hope’s lives, and Liam’s disturbing double standards when it comes to infidelity, we just can’t wait to hear Liam get the tongue-lashing he so richly deserves. Finn has more than a leg to stand on and has already proven he’s not intimidated by the flip-flopper’s ramblings, so bring it on!

We’re thrilled Finn’s finally getting a chance to get his own back from Liam, who treated him terribly when he first arrived on the scene. Liam made unfounded accusations about the good doctor out of jealousy, and this is Finn’s opportunity to point that out. We hope he goes one step further and lobs some accusations of his own. After all, we know that on some level Liam cheated and confessed because he couldn’t stand the idea of Steffy being with someone new. 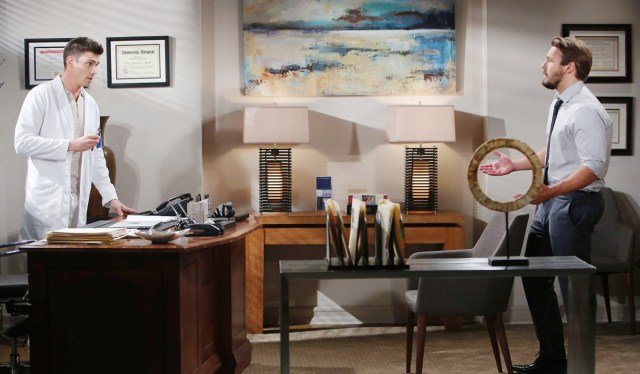 Remember when Liam came for Finn? Oh, how the tables turn…

Perhaps after a showdown with Liam, and seeing firsthand how he defends his actions or tries to emotionally manipulate the situation to excuse himself, Finn will get some much-needed perspective on the guy. Knowing what he’s dealing with should help him to decide how to proceed in the future. Will he continue his relationship with Steffy now having the full measure of his competition, or decide not to pursue a future with her upon realizing he’ll never truly be rid of her ex?

Finn and Liam’s confrontation could easily turn physical and seeing how Brad Bell and company manage to make that happen given social distancing restrictions could be very entertaining. We’re picturing everything from male mannequins flying through the air to Finn snatching the inflammatory portrait of Liam and Steffy off the wall, brandishing it with bared teeth, and smashing it down over Liam’s head. Imagine Steffy’s shock if she walked in on Liam seeing stars with the picture of their love around his neck. We’re sure Finn would have regrets… for Kelly’s sake. But, wow, wouldn’t it be great?

See a gallery of Bold & Beautiful’s most memorable rivalries below. Get your free daily soap-opera fix for The Bold and the Beautiful — and all of the other daytime dramas — delivered straight to your email inbox by signing up for Soaps.com’s newsletter.

<p>Half-brothers Thorne Forrester and Ridge Forrester tolerated one another better than ever before during their last meeting, but this sibling rivalry is one of the longest-running on the show. Entrenched in their mother, Stephanie’s favoritism toward Ridge, they’ve battled over women and at work, where Thorne often ended up working in the basement while Ridge designed in the big office.</p>

<p>Stephanie Forrester and Brooke Logan’s rivalry is legendary on Bold and Beautiful, as Stephanie balked at her son Ridge’s interest in the girl she viewed as not being good enough for him. Brooke got involved with Stephanie’s other son, Thorne, and her husband, Eric as well. They also battled over Brooke’s children, but came to an understanding in the end, with Brooke being there for Stephanie’s death from cancer.</p>

<p>Another iconic rivalry on Bold and Beautiful, Brooke Logan and Taylor Hayes locked horns over one Ridge Forrester for decades, with his mother Stephanie often getting in between. Their clashes have turned nasty, and after their daughters grew up and became rivals, it was just another reason to tangle!</p>

<p>Pam Douglas’ dislike for Donna Logan, who fell in love with her sister Stephanie’s husband Eric, knew no bounds and really turned nasty. Pam once covered Donna with honey (her go-to during sex with Eric) and left her to be eaten by a bear! Donna and Pam get along now, but whew, this was one rivalry for the books.</p>

<p>Another rivalry for the ages on Bold and Beautiful, Sally Spectra butted heads with Stephanie Forrester time and again. Stephanie was no fan of the design-stealing redhead, and Sally backed down from no one. The two mellowed toward one another in later years.</p>

<p>Bill Spencer Jr and Ridge Forrester share a mutual loathing that has become so nasty as to be life-threatening at times. Aside from punch-ups over women and disagreements, and volleying insults, Bill had Ridge dumped out of a helicopter, and Ridge was accused of shooting Bill.</p>

<p>Quinn Fuller Forrester has clashed with more than a few rivals during her time on Bold and Beautiful, but when the notorious Sheila Carter showed up looking to take Quinn’s man, things went to another level. Quinn and Sheila’s rivalry was also one of the most anticipated, and did not disappoint, as the duo tangled physically on numerous occasions.</p>

Now That The Bold and the...

Everything Wrong With Liam's...