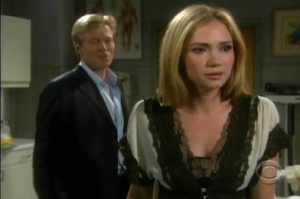 B&B Breakdown for the week of October 26.

I was so happy Owen told Jackie he didn’t want kids if it meant he couldn’t be with her. Thank God! Not only was it sweet and reassuring about this couple that I like, but I don’t want to see them have kids because A) It’s not what Jackie wants at all and B) It doesn’t really fit Owen’s character, in my opinion. Besides, according to the spoilers (skip this part if you don’t want to know what’s to come) Bridget and Nick will be going down the path of using a surrogate and we don’t need more than one couple dealing with baby issues right now. I just hope Jackie and Owen get back to be the sexy fun couple they started out as.

As for Nick and Bridget, I felt really bad when Bridget told Nick she couldn’t carry a baby to term, but I thought Nick was the one to watch during those scenes. Even though I thought he was a bit harsh on Bridget, I understood why he wouldn’t want to risk her life by trying to conceive. I felt his anguish over what happened in the past and totally got why he just wanted to enjoy what he has in his life right now. Of course, Nick could have suggested an alternative to Bridget getting pregnant, such as adoption or surrogacy, instead of just telling her he wants no part of it, but otherwise it was good stuff.

Bill’s takeover of FC is continuing to entertain me. I’m enjoying Ridge’s torment over it and loved that Brooke tried to buy the company back for him by liquidating all of her assets. It was a totally loving and selfless gesture on her part, but best of all, it’s giving Ridge and Brooke an obstacle to overcome other than a third party coming between them. It’s nice to see couples sticking together while struggling to prevail.

The Logans are completely in charge now that Throne and Ridge decided to pass on being President and Vice President of Forrester. I thought Felicia and Eric should have been in that meeting though. Maybe Felicia would have relished the opportunity to finally get some power over there and I suspect she would have some pretty good chemistry with Dollar Bill.

The new Royalty photo shoot piqued my interest as Bill totally played puppet master with Katie when he physically put her in between her sisters and put the crown on her head. To me, it was a glaring declaration that he is in control. I do believe he loves her, but he’s also totally pulling the strings.

Donna’s new role as host of “The Catwalk” has possibilities. I want to see more of Justin, so hopefully we’ll get that now that they will be working together. I’m also happy that Donna will have a job to do that doesn’t involve Eric or FC. I think she needs to strike out on her own and find her own voice so to speak. My problem with it though is Donna would never go out live on air unprepared, especially since this was her first time in an interviewer position. Also, if she didn’t know Pam was going to be her guest, or that she was even going to be the host, how did she just happen to have the calendar with Tiny’s photo? And why would she submit his photo to it for Pam in the first place? Further, I enjoy comedy, but I like it a bit more subtle than what was going on with Pam feeding into the crowd. I hope if we see more of Pam and Donna co-hosting the show, they tone it down a bit.

I was excited to see the flashbacks of Justin and Donna in high school, but was disappointed it consisted of only about a minute, if that. Hopefully there will be more in the future, because really, that afro Justin was sporting was sorely wasted if all we got to see was the back of his head.

That’s all I got for this week. What did you think? Feel free to share your thoughts below.

The Bold and the Beautiful's Ashley...