Bold & Beautiful’s Liam, Hope and Steffy Are Heading For a Showdown Over Who Should Raise Kelly! 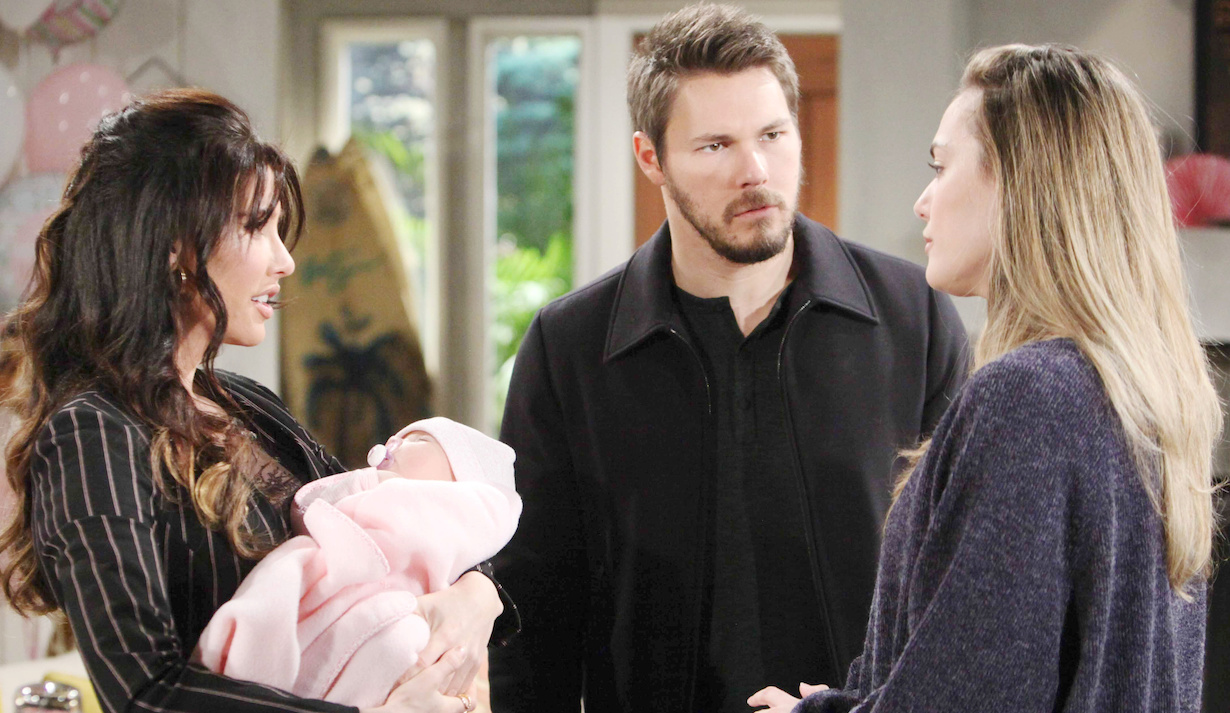 Will Steffy’s pill-popping cost her her daughter… or bring Liam back to her side?

The confrontation between a concerned Liam and an emotionally volatile Steffy made this week’s episodes of The Bold and the Beautiful must-see TV. It also sparked debate among viewers as to whether Liam had stepped over the line by threatening to remove daughter Kelly from mom Steffy’s care while simultaneously creating a scenario destined to divide fans even further moving forward!

Obviously, Liam was doing what he thought best, especially once he got Steffy to admit that she’d been taking illicitly-obtained pills. But thanks to the stunning performance of Jacqueline MacInnes Wood,  it was hard not to feel for Steffy as her ex stood there, saying that he intended to take away her little girl. “I’m Kelly’s mother!” she shouted, tears pouring down her face. “She’s my only child! And now you’re going to take her to Hope? You already took Phoebe away from me, and now you’re going to take Kelly?”

And that was exactly what Liam did, packing up the youngster and bringing her to the cabin. And quicker than you can say “custody battle,” Hope was declaring, “We can’t trust her to be responsible enough to take care of a child!”

By the time a bedraggled, hyper Steffy showed up at Brooke’s, it was clear battle lines had been drawn. “Is Liam not enough, Hope?” she asked. “Now you want my daughter, too?” Given that Hope has been raising Thomas’ son, it wasn’t hard to understand why Steffy — especially in her current state — might fear her longtime romantic rival was looking to add to Phoebe’s permanent playgroup!

Although Steffy felt in that moment as if she was losing everything, we couldn’t help thinking the exact opposite might be true. After all, if there’s one thing we know about Liam, it’s that he suffers from white-knight syndrome. Where there’s a distressed damsel, you’ll find Liam, riding to her rescue… usually at the expense of the other woman in his life.

More: Liam might finally get what’s coming to him!

It’s easy to picture a scenario in which Steffy’s addiction leads to Liam spending more and more time with her. And as we’ve seen, Thomas would be more than happy to help Hope find ways to occupy herself. (While she this week referred to herself as Liam’s wife, it’s worth noting that the two aren’t actually legally married at the moment!)

If there’s one wild card in the deck, it’s Steffy’s handsome doctor. While Finn immediately sparked with his favorite patient, could their steamy kiss have been a red herring on the part of the writers? Might their real purpose have been to stoke Liam’s jealousy in order to hasten the perpetual waffler’s latest would-be-wife swap? How ironic would it be if Hope was finally freed of Liam’s influence, but Thomas lost her to the very doctor whom he’d been urging his sister to date?

At the center of all this adult drama, of course, is an innocent child. Kelly’s only mistake in life was being born into a complicated quagmire where ever-shifting emotions undermine even the most solid of relationships. Should things continue along their current trajectory, the poor girl’s mother and father may soon find themselves battling for control of her future, leaving fans to duke it out over who should come out the winner!

Do you think Liam and Hope should try and gain custody of Kelly? Offer up your predictions in the comment section, then visit the gallery below as we flash back to the other wars which have been waged between the two women in Liam’s life!

The Bold and the Beautiful's Darin...

The Bold & Beautiful Storyline That...