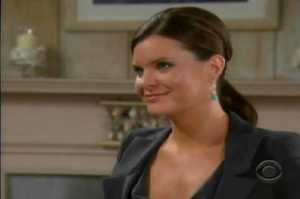 A change of heart. (Soaps.com)

B&B Breakdown for the week of October 19.

It’s no secret that I have loved the character of Bill since day one, but not only is he enjoyable to watch, he’s totally shaken up the canvas. It’s been so much fun to watch the dynamics of Forrester Creations change and for them to have a brand new problem to deal with.

I’ve also appreciated that FC’s money problems have been a plot point for most of the year, giving this story more credibility. They didn’t suddenly hit bottom so Bill could swoop in and take over. They’ve been struggling with sales, their buyers and their competition I think since Eric married Donna, so them selling off property and taking out loans hasn’t come out of the blue.

Even though I found her to be a bit condescending to Katie, I liked that Brooke rallied the troops and made them see that there was no other alternative. They could still find a way to be in control of their beloved company, while using Bill’s money and resources to get out of debt and benefit themselves. Someone in that group had to see it wasn’t the worst thing that could happen to them.

This storyline has also brought the character of Katie into her own. She had the heart transplant storyline and then the love triangle with Nick and Bridget, but this seems to really be her time to shine. I’m not sold on the idea that Katie should be CEO, but I’m loving her standing up to her sisters, the Forresters and even Bill at times.

As for Katie and Bill’s engagement, even though it’s a little rushed, I love this couple and think it adds to the story, so I’m not as opposed to it as I might usually be. As long as they don’t start talking kids I’ll be okay. My favorite part of the whole week was Brooke and Ridge’s dumbfounded expressions upon learning of their engagement. It was priceless.

My only complaint about this couple is how Bill keeps saying, “Good girl” to Katie. It is driving me insane because it is, like Brooke, so condescending. That may be the point, but I hate how every time she does something he approves of or she finds the confidence in herself to stand up to her family he says that line. She’s not a dog and she’s not a child, so please, stop saying that.

I could not have agreed with Nick more when he said he wanted to slap some sense into Owen. I am tired of hearing him badger Jackie into having a baby with him. How can he not realize she wants no part of it? I was so relieved she ultimately told him couldn’t do it because I do not want to watch her go along with his while being miserable. There’s really only so much you can give to the man you love, especially when it comes at your own expense. So kudos to Jackie for not giving in. If Jackie wasn’t so sad, I would have laughed when she told him and Steffy they should have a baby together instead. I wonder if they will take her up on it.

He was only on briefly this week, but I loved when Whip told Jackie, he has no burning desire to have kids. He has burning desires, just not that one. I can't wait for Sarah Brown to come on so we can see more of him!

So that’s all I got for this week. What did you think? Feel free to agree or disagree with me below.